China, Japan and the US All Have Carrier Groups in the West Pacific As Tensions with Taiwan Rise

China, Japan and the US All Have Carrier Groups in the West Pacific As Tensions with Taiwan Rise

China, Japan and the US All Have Carrier Groups in the West Pacific As Tensions with Taiwan Rise
By Joe Hoft
Published May 7, 2022 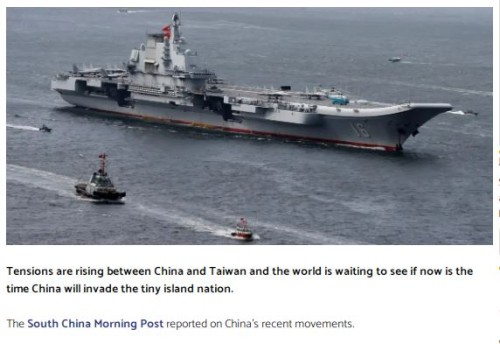 Chinese aircraft carrier Liaoning has led a larger than usual strike group to train in the western Pacific as tensions rise over Taiwan.

Escorting the Liaoning were five destroyers, including a Type 055 — the most powerful such warship in the Chinese navy — as well as one frigate and one supply ship.

The fleet passed through the Miyako Strait between Japan’s Okinawa islands on Monday afternoon to enter the western Pacific before heading south, Tokyo’s defence ministry said.

The USS Abraham Lincoln carrier strike group is currently deployed in the Philippine Sea, according to US Navy ship tracking information on Monday. This means the Chinese and US carrier groups would possibly not be too far away from each other.

We’ve been reporting for months on China’s desire to invade Taiwan and fully incorporate the tiny nation into China. With Biden in the White House, China may take the opportunity to do so.
Russia’s invasion of Ukraine has only bolstered the Chinese and many believe China will invade Taiwan next. Japan knows this and it has a carrier group in the area as well. This means China, Japan and the US all have carrier groups in the waters near Taiwan.

While Japan sent an Izumo light aircraft carrier, a P-1 maritime patrol aircraft and P-3C anti-submarine aircraft to monitor the activities of the Chinese ships, Taiwan announced it would closely monitor Chinese military maneuvers in waters and airspace.

This is the first Pacific training session of the Liaoning carrier strike group this year. Last year, it took five other warships through the strategically-important strait to carry out combat exercises in the Yellow and East China Seas and the western Pacific Ocean.We’ll see what happens. These are scary times with Biden in the White House. Countries around the world know that the US is as weak as its been in over a century.
images/ondertekening.jpg
Omhoog
Plaats reactie
1 bericht • Pagina 1 van 1