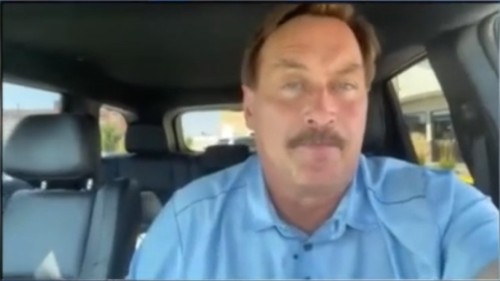 Mike Lindell of MyPillow was raided by the FBI outside a Hardee’s restaurant.
They took his phone – the phone he uses to operate his business and run his hearing aids.
Mike has put his own money toward getting to the bottom of what happened in the 2020 election.
Is that illegal? Or is the justice system being politicized?

After the raid, Mike Lindell promised to fight.
He told Steve Bannon:
“I’ve been on the phone…with some of the best lawyers in the country — Alan Dershowitz, Andrew Parker, Kurt Olsen amongst others…We are suing the United States Government and the FBI…my First, Fourth and Fifth Amendment rights were broken...we’re not going to put up with this. We’re not going to be the Gestapo like in Nazi Germany…
We got all the lawyers on the phone, they looked up all these statutes. We’re going places where no man has gone before. This will set a precedent. This has to stop.“
Now, Mike is following through.
He just filed a lawsuit against the FBI and Department of Justice for violating his constitutional rights.
Business Insider reports:
MyPillow CEO Mike Lindell is suing the FBI and Department of Justice for seizing his mobile phone outside a Hardee’s in Mankato, Minnesota, and accusing the authorities of violating his constitutional rights.
Lindell sent Insider a copy of the lawsuit in which Attorney General Merrick Garland and FBI Director Christopher Wray were listed as defendants.
Represented by a legal team including conservative lawyer Alan Dershowitz, Lindell’s suit claims the FBI violated his “First, Fourth, Fifth, and Sixth Amendment” rights. He is also demanding that his cell phone be returned and that any information obtained from his phone by the FBI or DOJ not be released.
The lawsuit gives a detailed account of Lindell’s side of the incident, in which he describes driving home at 4 a.m. on September 13 with a friend after going duck hunting in Minnesota. Per the suit, Lindell’s group was at a Hardee’s in Mankato sometime in the late morning when they found themselves boxed in by FBI officers.
To help, if you need new mattresses or pillows or bedding or slippers, go to MyPillow.com and use promo code TGP.
You’ll get up to 66% off, plus Gateway Pundit will benefit from the purchase.
Even if you don’t need something right now, do what you can to support Mike!
MyPillow.com has much more than pillows:
images/ondertekening.jpg
Omhoog
Plaats reactie
1 bericht • Pagina 1 van 1