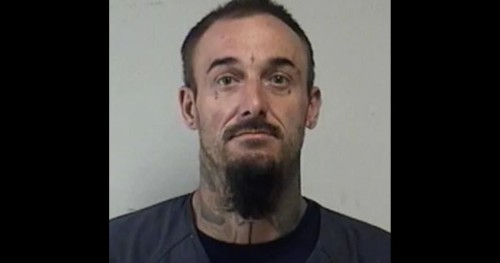 The man who allegedly fired a shot in the air prior to the 2020 shootings involving Kyle Rittenhouse during a riot in Kenosha, Wisconsin, has been charged along with his wife with crimes allegedly committed in late August.

According to WiscNews, Joshua Ziminski, 37, and Kelly Ziminski, 32, are both charged with armed robbery, armed burglary, false imprisonment, intimidation and identity theft — all are felonies.

Joshua Ziminski also faces another felony charge of bail-jumping; Kelly Ziminski is facing a probation hold, the outlet reported.The charges stem from an incident in which the couple allegedly attempted to rob a Kenosha man at knifepoint in the early morning hours of Aug. 26.

Citing a criminal complaint against the Ziminskis, WiscNews reported that a man told Kenosha police that a woman, Kelly Ziminski, and two men, one of whom was identified as Joshua Ziminski, had come to his apartment about 1:20 a.m.The alleged victim, who was not identified in the WiscNews report, told police that he let Kelly Ziminski in to use the bathroom and was quickly grabbed by the two men with her.

The complaint states that Joshua Ziminski told the man to “Give me the money from the house,” WiscNews reported. The man replied he had none and his money was in the bank. The man who was with the Ziminskis punched the alleged victim twice in the face, according to the complaint, WiscNews reported.

They led him out of the home and pushed him into a truck, according to the complaint, WiscNews reported.

They then allegedly demanded the PIN code for his debit card and drove to a gas station to use an ATM. They failed to withdraw any money and drove him to three other stations, failing at each stop. Finally, when they drove back to the first gas station, the man was able to flee into the store and ask the clerk to dial 911.

His alleged captors then drove off.

According to WiscNews, police made contact with the alleged victim about 2 a.m.

Joshua Ziminski told officers after his arrest Monday that Kelly had met the man and agreed to clean his apartment three days a week for $200, according to WiscNews. He then told officers that the two of them were at the apartment at 1:30 a.m. Aug. 26 for Kelly Ziminski to clean. He said that after he waited in the car and his wife went inside, she came out and told him the man had hit and raped her, WiscNews reported.Joshua Ziminski reportedly told police that he confronted the man and demanded the $200. The man had offered to go with them to an ATM to withdraw it, Ziminski said, according to WiscNews.

“He also said the man at one point handed the debit card to him and told him to try to use it,” WiscNews reported.

The Ziminskis are being held on $100,000 cash bond each and have preliminary hearings scheduled for Sept. 23, according to the outlet.

Joshua Ziminski is best known to the public as being identified as the man who allegedly fired a “warning shot” in the air during the Kenosha riots on Aug. 25, 2020, according to the Kenosha News.According to an Associated Press report from Nov. 4, a Kenosha County detective identified Ziminski as the shooter.

That shot played a key role in leading then-17-year-old Rittenhouse, who was volunteering as a medic in the riot zone, to shoot three men who attacked him. Two of the men died.

Rittenhouse faced first-degree homicide and other charges in the shootings.

His defense attorneys said the Ziminski shot convinced the teen, who was already being pursued by rioters, that he was under armed attack, the AP reported.

Rittenhouse was acquitted Nov. 19 after a trial that drew national attention.

The trial was postponed, however, and the bail was increased to $14,000 after Ziminski was arrested again over an allegation that he had intimidated a witness who was to testify against him, according to the Kenosha County Eye. The intimidation allegedly took place the morning the trial was supposed to start.

That witness was freelance photographer Nathan Debruin, who had a photograph allegedly showing Ziminski committing arson during the riots, according to the Kenosha News.

Ziminski has not been charged in the witness intimidation case and was free on bail pending his trial on the charges from the riot.