Secret Service agent, 48, who 'claimed Trump grabbed the limo steering wheel to go to the Capitol on January 6' RETIRES

Secret Service agent, 48, who 'claimed Trump grabbed the limo steering wheel to go to the Capitol on January 6' RETIRES

Secret Service agent, 48, who 'claimed Trump grabbed the limo steering wheel to go to the Capitol on January 6' RETIRES: Comes two months after Cassidy Hutchinson's explosive testimony
The US Secret Service confirmed to DailyMail.com in a statement that Assistant Director Anthony Ornato is retired as of Monday
Ornato became a central figure in the House select committee on January 6's investigation into the Capitol riot earlier this year during the panel's hearings
Ex-White House aide Cassidy Hutchinson testified that Ornato described Donald Trump lashing out at agents when they refused to take him to the US Capitol
Ornato appears to have had an unusually close relationship with Trump
He served on Trump's White House staff briefly at the end of 2019
The retired agent told CNN he's moving to a job in the private sector
By ELIZABETH ELKIND, POLITICS REPORTER FOR DAILYMAIL.COM

A top official within the US Secret Service, who allegedly accused Donald Trump of attacking his security detail on January 6, has now retired.

The US Secret Service confirmed to DailyMail.com on Tuesday that Assistant Director Tony Ornato is out of the agency roughly two months after his name became a lightening rod during the House of Representatives' January 6 select committee hearings

'We can confirm that Anthony Ornato retired from the U.S. Secret Service on Monday in good standing after 25 years of devoted service,' Secret Service Special Agent Kevin Helgert said.

Per USSS policy, agents are eligible to retire at 50 after 20 years of service, and at any age with 25 years of work.

He told CNN that he would be moving to the private sector but did not specify his employer.

Ornato was a key member of Trump's orbit before and after the US Capitol attack last year.

Cassidy Hutchinson, the former assistant to Trump's final chief of staff Mark Meadows, told a panel of lawmakers in June that Ornato described the former president becoming 'irate' when Secret Service agents refused to take him to the US Capitol with his supporters.

Ornato allegedly told her that Trump demanded: 'I'm the f***ing president, take me up to the Capitol now.' 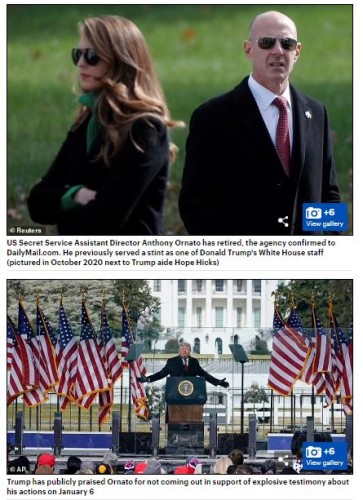 She described Trump lunging for the steering wheel of his presidential limo and suggested he went for the 'clavicle' of an agent who insisted they return to the White House.

Hutchinson's explosive testimony prompted calls from both sides for Ornato to come forward and share his account.

He never spoke publicly but met with the Capitol riot committee behind closed doors twice earlier this year.

People close to Ornato told multiple outlets that he was denying Hutchinson's story - though that was further complicated when other former White House aides accused him of lying.

'Those of us who worked w/ Tony know where his loyalties lie. He should testify under oath.'

Another former Trump staffer, Alyssa Farah, added: 'Tony Ornato lied about me too.'

'During the protests at Lafayette sq in 2020, I told Mark Meadows & Ornato they needed to warn press staged there before clearing the square. Meadows replied: “we aren’t doing that.” Tony later lied &said the exchange never happened. He knows it did,' Farah claimed.

Rep. Adam Kinzinger, one of two Republicans on the committee, picked up on their claims to further cast doubt on Ornato's denials.

'There seems to be a major thread here… Tony Ornato likes to lie,' the Illinois lawmaker stated.

Ornato was unusually close with Trump for a Secret Service agent, having briefly departing his law enforcement role for a stint as the ex-president's deputy chief of staff in December 2019. He later returned to the agency.

He told CNN on Monday that he was departing his role for 'private sector' work in a statement that made no mention of the former president or the January 6 investigation.

'I did retire today to pursue a career in the private sector. I retired from the U.S. Secret Service after more than 25 years of faithful service to my country, including serving the past five presidents,' Ornato told the outlet.

'I long-planned to retire and have been planning this transition for more than a year.'

He reportedly would not name his next position but said he would not be working for Trump or one of his related businesses.
images/ondertekening.jpg
Omhoog
Plaats reactie
1 bericht • Pagina 1 van 1