Eglinton: If Anyone Could Fake Death, It’s John McAfee

Eglinton: If Anyone Could Fake Death, It’s John McAfee 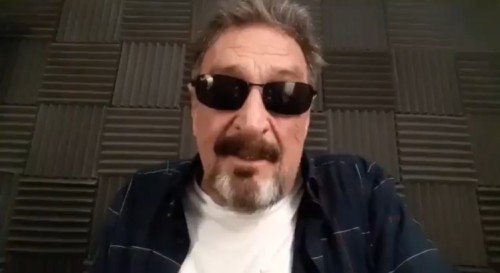 A new Netflix documentary released today entitled Running With The Devil: The Wild World Of John McAfee spins the extraordinary claim that the former tech tycoon turned international fugitive is still alive and living in Texas.

A former girlfriend of McAfee’s, Samantha Herrera, who assisted his escape from Belize in 2012 when he was sought for questioning about the death of his neighbor Gregory Faull, claims she received a phone call from McAfee suggesting that news of his demise (he was reportedly found dead from suicide in a Spanish prison cell in June 2021) has been greatly exaggerated.

What is the truth? Time may or may not tell. McAfee’s world is a complex one and the new documentary appears to pose more questions than it answers.

What is true is that I personally worked with John McAfee on what was intended to be his autobiography, while he was on the run in 2020. In the book entitled No Domain: The John McAfee Tapes. McAfee opened up to me in a way he had never previously done.

During our conversations, McAfee described to me how on two previous occasions he had evaded capture by faking a stroke and a heart attack respectively.

This was a man who knew how to make moves. Is it possible that John McAfee has pulled off his greatest ever act of escape?
images/ondertekening.jpg
Omhoog
Plaats reactie
1 bericht • Pagina 1 van 1