Infiltrate, Provocateur, Frame: FBI Fedbois Activate!
There is no question that the FBI has been fully weaponized against the American people

The FBI has never had the best reputation in the world, and while there are good men and women working at the organization with patriotic intentions, the upper echelons of the organization have clearly been compromised by Deep State control for quite some time. The actions of the FBI over the last few years, and especially over the last few weeks, have demonstrably proven this. It’s only gotten worse and worse. Has it always been this bad, or is it just now getting uncovered?

The COINTELPRO programs of the 1960s targeting civil rights and political organizations in the United States first started to stain the reputation of the FBI. This program wasn’t known publicly until 1971, and while the government claimed to terminate the program in 1971, domestic spying on American citizens and infiltration of truth & freedom movements has undoubtedly continued to this day.

While details are scarce, the surfacing of another FBI domestic espionage program lets us know that their infiltration actions most definitely continues to this day. This program was called PATCON, which the FBI launched in 1991 to track patriot groups that they labeled as “right wing extremists” (sound familiar?). The details of PATCON did not surface publicly until FOIA requests were filed by the author J.M. Berger in 2007. He has a detailed write-up of PATCON on the internet, and the Epoch Times is one of the few media outlets who was written about the story. COINTELPRO in the 60’s, PATCON in the 90’s, we can only imagine what covert programs might be going on today.

Then we have the mass shootings, and not much needs to be said about how so many mass shootings in the U.S. over the last few decades seem to have the smell of FBI around them. Often times the shooter is previously known to the FBI before the shooting happened. That’s not suspicious at all. /sarcasm/

Moving up to more recent times, through President Trump’s two elections, 2016 and 2020, the FBI’s corruption has had a massive spotlight shown on it. We all know by now (or should) that the FBI was weaponized by the Clinton Cabal in an effort to prevent Trump from winning and staying president in 2016. For the 2020 election, there is no question that the FBI had plants and informants within the crowd on January 6th, 2021, which is a story continuing to be told to this day.

Now over the last few weeks, the FBI has taken their targeting into overdrive against President Trump and the American people by raiding Mar-A-Lago. It’s quite clear they are the ones acting as extremists and trying to incite a civil war and insurrection, even though they are blaming these things on “right-wing” patriots. Pure Projection.

Ah yes, their gaslighting excuse for raiding Trump’s Florida residence was “FoR NuClEaR DoCuMeNtS”. Sounds like an excuse they spit out after the fact, when they didn’t find anything in Trump’s safe or Melania’s pajama drawer and had to save face with some made-up reason for sending plainclothes officers into Trump’s home. Even if it were true, I’d feel safer with the Nuclear Codes in Trump’s hands at Mar-A-Lago than the old, decrepit hands of sniff-a-kid Joe Biden at the White House. 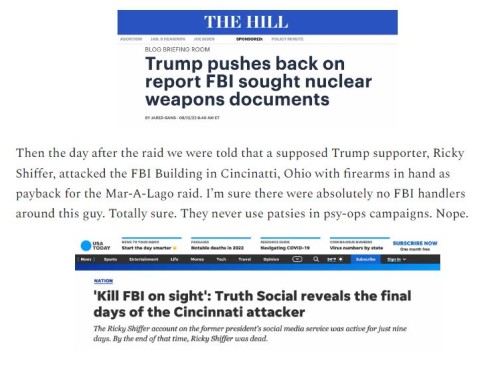 The kicker was that, apparently/supposedly/we’re told, Ricky Shiffer was posting violent rhetoric on Truth Social right beforehand, telling people to “Kill FBI on sight!”. If I had to guess, this is a classic frame job designed to make MAGA look bad and get Truth Social kicked off the net. Notice how he literally started his Truth Social account on August 1st only a week or so before the Mar-A-Lago raid and his attack against the FBI building. Not a coincidence at all (I hope you can tell that there’s a high amount of sarcasm being used in this article). In the bio of his account, he also mentions “on the fifth I tried to explain to Epps”. Epps, like, Ray Epps? The guy who looked to be a Fedboi himself in the crowd on January 6th trying to get people into the Capitol building? That’s not a good look. These Fedbois are sloppy. They aren’t sending their best. 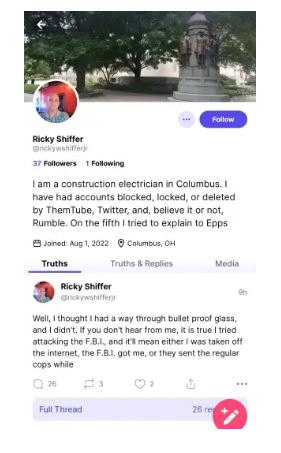 There was another situation with “armed Trump supporters” over the last few days, too - this one in Phoenix over the weekend. Similar details, “armed Trump supporters” protesting outside of an FBI building. What, did the FBI agents dress up in MAGA gear and walk outside for a photo opportunity? What lazy psy-ops. They all had masks on, too, in 100 degree Arizona heat. Why hide your face, guys?

Coincidentally, True the Vote’s “Pit” event that myself a couple hundred other election fraud activists and MAGA patriots were attending was occurring in Phoenix that day as well. Weird how these so-called “Trump Supporters” were protesting at the FBI office right down the road…

And probably the most obvious piece of bullshit from this whole ordeal, the FBI and Department of Homeland Security released a bulletin yesterday claiming that there was a threat of a dirty bomb being placed at FBI HQ that they received, along with claiming that there have been increasing calls for “Civil War” around the country after the Mar-A-Lago raid.

Increasing calls by who? Their own informants? If any sort of civil tension does break out in this country, you can damn well blame the FBI for being the main ones to foment it. They’re acting like the real insurrections here, aren’t they?

At this point, it’s safe to say the FBI needs to be completely overhauled from the top down, especially at the top. We need to root out every corrupt FBI agent, and root out every CIA, CCP, and Mossad plant that has been inserted at the FBI for dark agendas. In fact, could the FBI be completely disbanded and their investigation activities be given to sheriffs, police departments, U.S. Marshals, and the Defense Intelligence Agency? I don’t know, knowing the possibility of that is far above my non-existent pay-grade, but it’s clear we need a change in this country, otherwise the New World Order cronies are only going to continue threading their tentacles of corruption deeper into society and harassing honest, innocent everyday Americans with the Federal Bureau of Investigation.

My writings on Substack will always be free - but you can subscribe for $5 a month to assist my works. Your support is greatly appreciated!