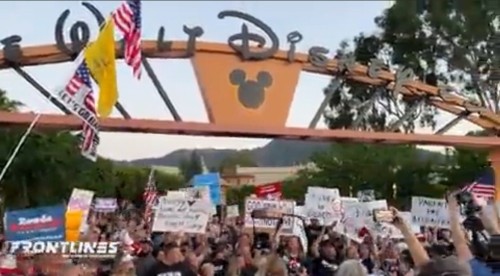 Disney is once again affirming its commitment to woke-ism. The company, built on providing entertainment for children, appears to be more committed to indoctrinating children than entertaining them. In March, Disney crusaded against parents by publicly opposing Florida’s Parental Rights Bill. In April, their desire to insert themselves into politics led Florida Gov. Ron DeSantis to sign a bill removing Disney’s tax privilege and self-governing status.

They have made it clear that their desire is to ‘transform culture.’ A leaked internal document revealed Disney’s push to white employees to donate to BLM and to ‘not question’ their black peers.
TRENDING: MISSOURI GOP SENATE PRIMARY: "ERIC WINS" -- Attorney General Eric Schmitt Wins Primary Over Vicki Hartzler and Eric Greitens

Their woke version of Buzz Lightyear was a total flop.Disney’s latest woke move comes via The Disney Channel and the introduction of its first-ever trans character. Juliana Joel will play Nikki, a recurring role on Home, a reboot of the popular show That’s So Raven.
Juliana Joel shared the following on Instagram:

A personal story I shared with
Raven on set:
Growing up as a kid in Florida (like many other kids) I dreamt of being on the Disney Channel, specifically on That’s So Raven. It was my favorite show & Raven Baxter was my best friend in my mind. It was my escape from what I was going through internally. Coming from a typical Puerto Rican family, I didn’t think being an actor was possible esp for someone like me, I thought you had to be born into that world. Fast forward to becoming an actor I then told myself I wasn’t young enough to be on Disney anymore & even if that wasn’t the case I’m TRANS! I’d never seen an out trans actor or character on the Disney Channel. EVER. Needless to say I cried in my dressing room after walking onto that set the first time. It was a moment where it hit me that I not only get to live out my childhood dream on a version of my favorite show…I get to do it as my authentic self and with a character that is openly trans. But it was really more than just being on the show. With all of the anti-trans hate and narratives in media and society, it was a win. I claimed a dream and space for myself while so much of the world is trying to erase me & my community. And now I get to be that person I wish I had to watch on TV growing up. So never tell yourself it can’t happen because it can, in ways you never dreamt possible.

Massive shout out to @norireed the writer of this episode who created my character Nikki. She is such a talented, badass person and comedic genius.

And of course thank you to the entire cast & crew for being so welcoming, every episode was such a blast to be a part of. Go check out the crazy talented main cast of the show. 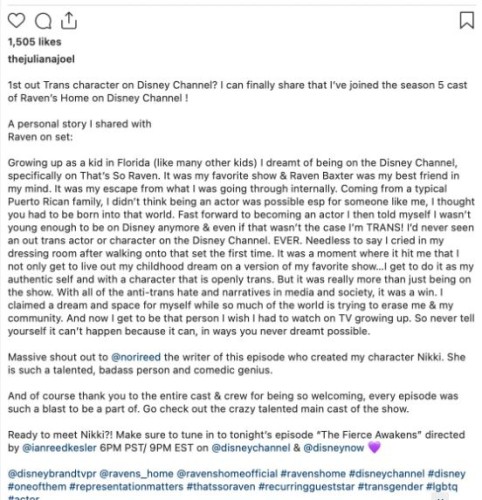 Disney’s woke agenda is taking a toll on its bottom line. A Trafalgar Group poll from April revealed that almost 70% of respondents are “less likely” to do business with the company because “news reports reveal Disney is focusing on creating content to expose young children to sexual ideas.” In the spring, company stock prices cratered by nearly $50 billion.