The U.S. military is moving assets, including aircraft carriers and large planes, closer to Taiwan

The U.S. military is moving assets, including aircraft carriers and large planes, closer to Taiwan 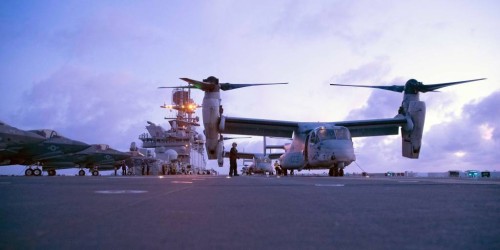 A MV-22 Osprey tiltrotor is seen on the flight deck aboard amphibious assault carrier USS Tripoli. The Tripoli is now near Okinawa. © U.S. Navy

TOKYO -- The U.S. military is moving assets, including aircraft carriers and large planes, closer to Taiwan ahead of an anticipated but unconfirmed visit to the island by House Speaker Nancy Pelosi.

The military was initially opposed to the speaker's visit but now looks to be creating a buffer zone for Pelosi's plane, in case she decides to go ahead with the controversial stop.

But with China declaring that it would "never sit idly by" if she were to visit the island, tensions in East Asia have quickly escalated, perhaps against the will of both U.S. President Joe Biden, who was seeking to remove some tariffs on Chinese goods to counter inflation, and Chinese President Xi Jinping, who faces a sensitive political season at home with his rule extension on the line.

A reporter for local network TVBS tweeted that the speaker is expected to arrive in Taiwan on Tuesday evening.

Pelosi and her congressional delegation landed in Singapore before dawn on Monday, according to flight tracking websites that followed the C-40C military plane on which she left Washington.

Singapore's foreign ministry released a statement on Monday afternoon saying the delegation met with Prime Minister Lee Hsien Loong and other high-ranking officials. The ministry said Lee welcomed the delegation's commitment to "strong U.S. engagement" in the region and that they "also exchanged views on key international and regional developments, including the war in Ukraine, cross-strait relations and climate change."

The city-state is the first stop on an Indo-Pacific tour that will also take Pelosi and her entourage to Malaysia, South Korea and Japan. The speaker has been tight-lipped about her reported plans to go to Taiwan. 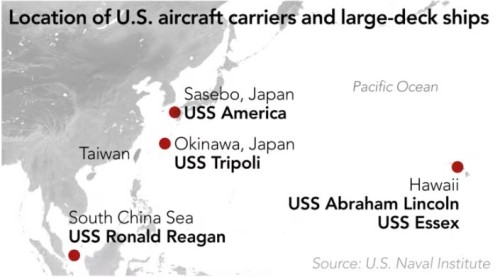 Further in the Pacific, the aircraft carrier USS Abraham Lincoln, Landing Helicopter Dock USS Essex and 36 other warships as well as three submarines are in Hawaii taking part in the Rim of the Pacific Exercise (RIMPAC), which will end on Thursday.

"If she does visit Taiwan, the diplomatic protocols will be very important," said Masahiro Matsumura, a professor of international politics and national security at the faculty of law of St. Andrew's University in Osaka. "It will be provocative if Pelosi visits Taiwan President Tsai Ing-wen at the presidential office. Other options could be the de facto U.S. Embassy in Taipei or parliament." 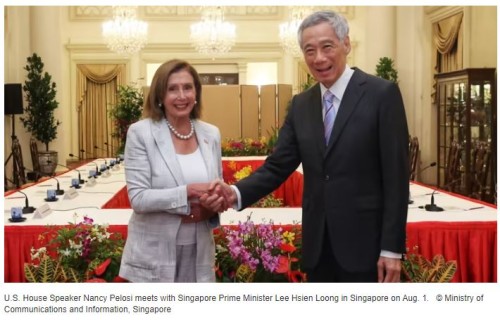 This is more of a diplomatic issue rather than a military issue, Matsumura said, doubting whether the Chinese side was militarily ready for a confrontation with the U.S.

Still, Beijing has been issuing daily warnings about the Pelosi visit.

On Monday, Chinese Foreign Ministry spokesperson Zhao Lijian warned that a Pelosi visit to Taiwan would lead to "very serious" developments and consequences.

"We would like to tell the United States once again that China is standing by, the Chinese People's Liberation Army will never sit idly by, and China will take resolute responses and strong countermeasures to defend its sovereignty and territorial integrity," he said at the ministry's daily briefing.

Asked what kind of measures the PLA might take, Zhao said: "If she dares to go, then let us wait and see."

Last Wednesday, Gen. Mark Milley, the chairman of the U.S. Joint Chiefs of Staff, said of the Pelosi trip, "We will do what is necessary to ensure a safe... conduct of their visit. And I'll just leave it at that."

The rapid rise in tensions has caught Japan off guard. Of its two Izumo-class multipurpose destroyers, which are being transformed into de facto light aircraft carriers, the JS Izumo is in Hawaii taking part in RIMPAC, while JS Kaga is under repair in the Kure Shipyard.
images/ondertekening.jpg
Omhoog
Plaats reactie
1 bericht • Pagina 1 van 1