Can a January 6th Protester Be a Legally Defined As a “Terrorist” for Attending a Rally?

Can a January 6th Protester Be a Legally Defined As a “Terrorist” for Attending a Rally?

Can a January 6th Protester Be a Legally Defined As a “Terrorist” for Attending a Rally? We Will Find Out Tomorrow At the Sentencing of Guy Reffitt. FIND OUT MORE HERE!
By Cara Castronuova
Published July 31, 2022

With apprehension we await the sentencing of Guy Reffitt tomorrow (Monday, 10 AM EST) to find out if US Judge Dabney Friedrich cooperates with the prosecution’s recommendation for a “Terrorism Upwards Departure” to enhance the January 6th defendant’s sentence to 15 years minimum behind bars. In the meantime, please read the guest post below submitted by Randy Ireland.\

Why is this sentencing so important and why should all Americans be paying attention? This is the Biden Department of Injustice’s warning to protesters who reject plea deals- a Terrorism Upwards Departure at Sentencing. The Justice Department is literally forcing people to not exercise their right to a jury trial by pressuring them under extreme duress and using their fellow defendants as “examples”. This is dystopic and UNCONSTITUTIONAL. If Judge Friedrich complies with the Government, the Trump appointee is agreeing that it is okay to treat the January 6th attack as an act of Domestic Terrorism. She is agreeing that American protesters can be legally defined as Terrorists and setting a precedent that will have enormous repercussions to the First Amendment as we know it. If the Terrorism Upwards Departure is applied, it will deeply influence the decision making of the hundreds of other J6 Protesters awaiting trial, future protesters that are charged for non-J6 related protests, and discourage First Amendment protected protests now and in the future.

Please see the guest article submitted to us by Randy Ireland, the founder of Americans For Justice. It is a great read on the background of Guy Reffitt, the Terrorism Enhancement and why we should all be paying attention.

“GUY REFFITT come out with your hands up! NOW!” are the words Nicole Reffitt was met with…as a flashbang grenade exploded outside the window of her other daughter’s bedroom!

In the pre-dawn hours of January 16, 2021, Nicole was awakened by noise and lights – she jumped out of bed running to the front door thinking her daughter who spent the night at a friend’s place must be in trouble. Against the backdrop of bright flashing lights from their cars and vehicles piercing the dark neighborhood, Nicole opened the door to 20+ law enforcement agents, their automatic weapons pointed directly at her!

Confused and still gathering what was going on she put her arms up to comply, while calling for her daughter and husband to come out. Her phone was taken from her, then her daughter comes out and her phone is taken, then given back to her. Nichole and her daughter were escorted at gunpoint to sit on back of the battering ram armored vehicle sitting near the front door.

Fully armed and outfitted in SWAT gear, over half of the law enforcement officers entered the house after throwing in flashbangs, yelling for Guy to show his hands, and come out. They took down Guy Reffitt in the house while he was trying to put on his clothes and handcuffed him. They led him out of the house into the 30-Degree freezing dawn air with his shoes and pants, but no shirt. As they escorted Guy past his wife and daughter, he looked at them and said “Everything will be all right – do what they ask. They are just doing their job.” That was the last time Guy Reffitt would see his wife and daughter until his trial, well over a year later.

What Guy Reffitt went through over the next year defies the very essence of fairness, humanity, civility, and justice that the United States of America is SUPPOSED to represent. Law Enforcement not only spent the next eight or nine hours going through his entire house collecting any evidence they deemed important, but even illegally tricked him into unlocking his smartphone! After placing him in the back seat of a law enforcement vehicle when he was escorted out of the house, they brought his smart phone to him.

“This phone is going to be taken in one direction with the rest of the evidence we take, and you will be headed in the other direction. Do you want to get any contacts or contact info from your phone before that happens? This is your last chance!” one of the law enforcement officers said to him.

“Absolutely!” Guy responded. As he was still handcuffed, the law enforcement officer lowered the phone to his thumbprint and pressed the phone against it to open it. Immediately after it was open – it was placed in a plastic evidence bag and taken away. Incensed, Guy yelled out “I do not give you permission to look in my phone! You had better show me a search warrant for that! I do not consent!!” It was useless, the damage had been done – they had tricked him! 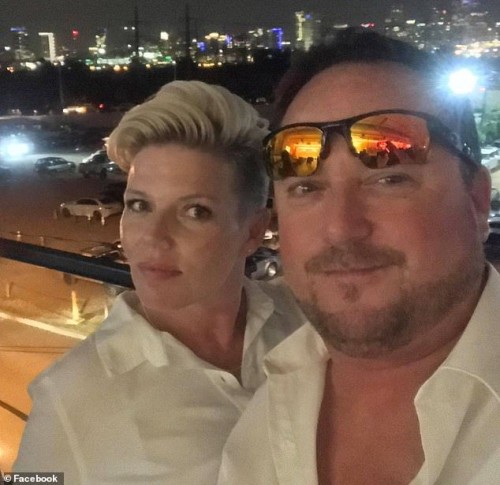 A few weeks later Guy Reffitt found himself relocated into the Washington DC Jail – into the heart of the beast at the DC Gulag. Here he was immediately placed in solitary confinement. Over the next 365 days he would spend approximately 252 days of that time in solitary confinement (treated worse than Death Row Inmates!). He was in a cell by himself, the size of a large door closet for 22-23 hours per day. In the 1-2 hours he was allowed out, he had to shower and share the phone with the others in the pod.In the words of his lawyer in the pre-sentencing memorandum to the court, he says:

Even more concerning, CTF inmates were confined to their cells for 23 hours a day from the time Mr. Reffitt arrived until approximately June 13, 2021; 22 hours from approximately June 13, 2021, to approximately October 2021; and again for 22 hours from December 22, 2021, to February 28, 2022. In other words, for approximately half of the time Mr. Reffitt has been at the CTF, he has been confined to his cell for between 22-23 hours per day. The psychological strain that puts on an individual cannot be seriously debated and is closely akin to the dangers of solitary confinement.During this time, he was routinely subjected to harassment and retaliation by the guards. His food was messed with regularly. Guy was often fed racist propaganda, denied medications, denied medical attention, denied privileged communications with his lawyer, denied religious services, denied haircuts, denied razors to shave, and denied any kind of visitation – including video visitation!

It was not until over a year of this kind of treatment that Guy Reffitt finally stood trial. Even this seemed to be set against him the whole time – witness after witness took the stand with no cross-examination by his Public Defender. No witnesses called to the stand on his behalf. At the end, convicted on all counts.If all of this was not bad enough, Guy learned a few weeks ago that the Prosecutor in the case was recommending the court apply an upward enhancement for a “Terrorism” enhancement! If successful, this would mean that Guy could be sentenced from between 15 years to 60 years, perhaps even more! All while having never entered the capitol building, never assaulting a Law Enforcement Officer, and damaging no property!

As Guy was never charged with anything that would rise to the level of the legal definition of TERRORISM, the DOJ and FBI are essentially trying to unlawfully make an example of Guy Reffitt’s case for the sole purpose of using it to prevent any other J6er from going to trial! This underhanded tactic – cloaked in hyperbole – demonstrates the sheer audacity of the US Federal Government in weaponizing January 6th for Political Purposes against anyone who dares to go against the ruling regime! They have themselves become the “TERRORISTS” against the American People, using the Color of Law to do it!

In America, we have a longstanding and storied tradition of NOT BREAKING THE LAW to UPHOLD THE LAW!

This is no longer the case! The chilling effect of this in Guy Reffitt’s case is that the US Federal Government is sending a direct message to every single American that if you dare to exercise your 1st Amendment Right to protest a perceived wrong against the administration in power, then they will point the finger at you, label you a “Terrorist” –even if they don’t charge you with TERRORISM related charges! – and send you away to prison for decades! This is TYRANNY! This is reprehensible! Is this really the kind of America that we want to live in? That our children and grandchildren grow up in?

In the words of Martin Luther King, Jr, “Injustice Anywhere is a Threat to Justice Everywhere!”

Please support Guy Reffitt and his family through prayers, letters, encouragement, and financial donations to help cover their legal defense expenses. Please keep in mind that regardless of what happens at the sentencing hearing on Monday morning, he and his legal team will still appeal his convictions.Randy Ireland is co-Founder of A4Justice.org (Americans For Justice, Inc) and C.A.P.P. (Citizens Against Political Persecution, Inc). He is a USAF Veteran, a successful Entrepreneur, and a staunch defender of both the US Constitution and all Political Prisoners. If you have any tips related to January 6th or would like to volunteer to help in our efforts, please contact Randy Ireland directly at Randy@A4Justice.org. Become a member of Americans for Justice today! SUPPORT our efforts to Fight Injustice!
images/ondertekening.jpg
Omhoog
Plaats reactie
1 bericht • Pagina 1 van 1