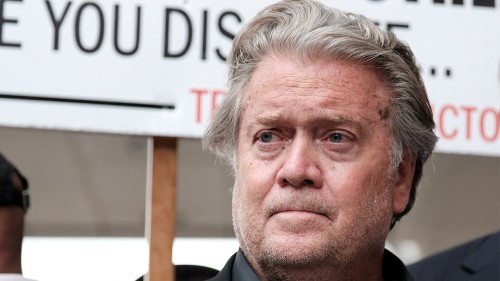 Stephen K. Bannon, the host of the popular War Room program and the former White House chief strategist for President Donald J. Trump, has worn many hats over the decades in the general liberty movement to restore the American Republic to its glory days.

Today Bannon is seen as the head ‘Honey Badger’ of the Populist movement- because he is not backing down ‘one bit’ from the corrupt, undaunted, bureaucratic-authoritarian powers in DC who are trying desperately to marginalize him.

Bannon’s powerful War Room program has inspired so much determination in the hearts and minds of Trump supporters to stay in the fight for American liberty that Bannon appears to be enemy number one to the RINO-Left-Biden administration- aka ‘authoritarian state.’

Last week, Bannon was found guilty of contempt of Congress in what looks like just another attempt to put Bannon in a box and file him away from the public- and from what he said on the War Room recently- Bannon is not getting into that box! In fact, he seems more determined to fight the headwinds in DC.

During a segment on his War Room show, Bannon directed a pointy comment to US House Speaker Nancy Pelosi (D-CA), House Select Committee Chairman Bennie Thompson (D-MS), and the Department of Justice – and he told them to “suck on it,” following his contempt of Congress conviction.

Watch:
“We have been maniacally focused, and we said we were going to kill this illegitimate regime in the crib,” Bannon said with a chuckle and a smile. “They can suck on it,” he said.

Bannon is not backing down one bit; he continues to get into the arena in DC to defend the much overlooked regular Americans who have really come to admire him for his tenacity.

On that same day, as reported by the Conservative Brief, “Bannon also spoke about a report stating that should Donald Trump run for president in 2024 and win, he’s planning to ‘gut’ hundreds, and possibly thousands, of federal employees.”

This is where Bannon shines- he deconstructs the powerful in DC and hands their greedy schemes to the American public – in a weaponized fashion to use against the enemies of liberty.

Bannon smashes the left’s narratives and turns the tables on them.

Here is the article:

Here is what Bannon said:

Bannon said that he was in favor of the reported plan because the U.S. had “taken on the model” of an “authoritarian state” that needed to be “deconstructed” and taken “apart brick by brick.”

Bannon is fearless even while facing their wrath and while they hold some keys to his freedom.

However, he may be ok in the end, as a prominent attorney recently argued that Bannon’s guilty verdict could be overturned.

Dershowitz called the conviction “entirely in violation of the Constitution” and predicted that a higher court would “very likely” overturn it.

After Van Susteren said the D.C. district where the trial was held is “94 percent Democrat,” Dershowitz chimed in, “Well, not only that but probably 97 percent Trump haters,” taking a poke at the very authoritarian- bureaucratic players, the lifelong government dependents, who loathe Bannon for his defense of America’s ‘little guy.

Dershowitz added: “And all you had to do was say, ‘Ladies and gentlemen of the jury, this man Bannon worked for Trump.’ That’s the end of the case.”

“Entirely predictable and entirely in violation of the Constitution. The only provision of the Constitution which appears basically twice is trial by jury, in front of a fair jury. Number one he didn’t have a fair jury. Number two the judge took his defenses away from him. The judge denied him a jury trial. They wouldn’t allow him to put on evidence that he believed there was an executive privilege involved and he wanted a judicial determination before he violated the executive privilege. That issue could not be presented to the jury,” Dershowitz said.

“As I predicted on this show and other shows before this conviction was a foregone conclusion. The only issue is whether will it be reversed by an appeal. Either by the appellate court in the District of Columbia or by the Supreme Court. I think it’s very likely that this conviction will be reversed at some point,” Dershowitz added.

Alan Dershowitz on the Bannon conviction: “Entirely predictable and entirely a violation of the Constitution.”