Bill Gates’s Foundation Just Paid for The Chinese Communist Party to Recruit Foreign Scientists.
WHY ISN'T ANYONE STOPPING THIS? 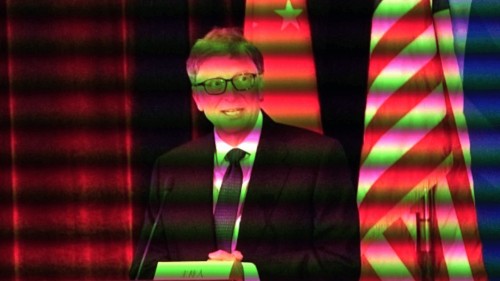 The Bill & Melinda Gates Foundation is helping fund the Chinese Communist Party’s Ministry of Science and Technology, assisting the brutal regime in its efforts to lure foreign scientists in to boost China’s scientific advancement, The National Pulse can reveal.

A recent, $100,000 grant from the Microsoft mogul’s foundation was sent to the Foreign Talent Research Center of China’s Ministry of Science and Technology in June, according to the organization’s website.

The purpose of the cash is listed as organizing a forum on “pandemic preparedness and response,” which would focus on “leveraging resources to improve global health and support disadvantaged populations who are disproportionately impacted by pandemic.” The forum is affiliated with the Zhongguancun Forum, a Beijing-based technology conference sponsored by the Chinese Communist Party that counts high-level officials – including President Xi Jinping – as speakers.

The Gates Foundation’s decision to fund the Foreign Talent Research Center of China’s Ministry of Science and Technology comes amidst controversy over the likelihood of international collaboration between U.S. and Chinese researchers in Wuhan leading to the genesis of COVID-19. Since the outbreak of the virus, the Chinese Communist Party has stonewalled investigations into the origins of the virus and planted Western researchers with compromising ties to China in senior investigative roles.

Beyond COVID-19, the Chinese Communist Party has also come under fire for weaponizing its science and technology programs to lure Western scientists away from their home countries in order to facilitate Chinese advancement and military build-up. This program – commonly known as the Thousand Talents Plan – has led to several Department of Justice (DOJ) indictments of American researchers who routinely fail to disclose their financial ties to the Chinese Communist Party despite receiving U.S. taxpayer funds. 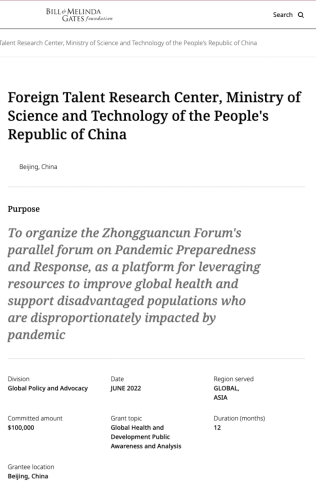 The Ministry of Science and Technology’s Foreign Talent Research Center appears to engage in similar conduct, as it is responsible for “bring[ing] in foreign talent,” according to an outline of its missions.

The ministry “formulates and facilitates the implementation of plans for bringing in high-end foreign experts, develops mechanisms for pooling top-notch scientists and research teams from abroad, and provides services for foreign experts,” it continues.

The unearthed grant comes amidst the Gates Foundation pouring millions of dollars into China, including to universities with ties to the Wuhan Institute of Virology.
images/ondertekening.jpg
Omhoog
Plaats reactie
1 bericht • Pagina 1 van 1