‘I’m A Pedophile’: Biden-Era USPS Chief in Mail-In Ballot Unit Arrested After Trying To Meet Teen Boy For Sex.
ANOTHER SEX PEST OFF THE STREETS. 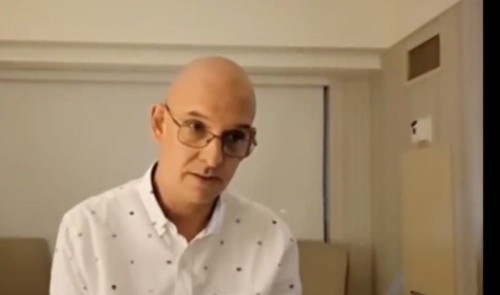 The PRC is responsible for overseeing the U.S. Postal Service (USPS) – which deals with mail-in ballots during election season – and Rappel-Schmid was tasked with running the commission’s data management and compliance with the OPEN Government Data Act.

While federal authorities have not yet confirmed the man in the video is Rappel-Schmid, the San Diego County Sheriff’s Department announced that Rappel-Schmid was released from the city’s Central Jail early Tuesday morning after being arrested on Monday. His felony arraignment is set for next Monday.

Rappel-Schmid was reportedly in San Diego for a business conference when he allegedly tried to meet what he thought was a 14-year-old boy for sex. The People vs Predators group filmed the encounter, and Rappel-Schmid can be seen admitting “I’m a pedophile.”

In response to the video and criminal charges, the PRC terminated Rappel-Schmid from his position.

“The Postal Regulatory Commission has become aware of the recent arrest of one of our employees. Upon becoming aware of this information, the Commission has terminated this employee effective immediately. The Commission is shocked and horrified at these serious allegations and maintains a steadfast commitment to promptly deal with any claims of employee misconduct.”

Rappel-Schmid’s profile has been removed from the agency’s website.

He joined the oversight body under President Joe Biden in May and previously served as the State of Alaska’s first chief data officer. Rappel-Schmid also worked at the USPS Office of Inspector General (USPS OIG) on the data analytics team and as an audit manager.
images/ondertekening.jpg
Omhoog
Plaats reactie
1 bericht • Pagina 1 van 1