Three things to think about this World UFO Day

Three things to think about this World UFO Day

UFOs are real, but a major government conspiracy is unlikely."

Three things to think about this World UFO Day
by Tom Rogan
July 02, 2022 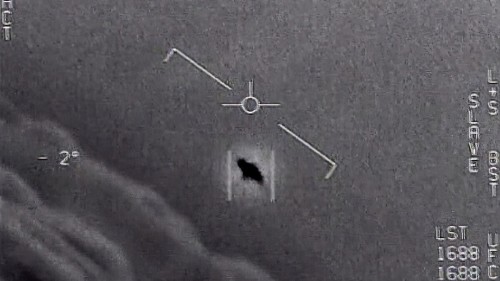 This Saturday's 2022 World UFO Day sees the topic imbued with new energy. Evinced by the first congressional hearings on unidentified flying objects — what the government calls unidentified aerial phenomena, in more than 50 years, the topic is being taken far more seriously by more of the government. Here are three takeaways on where things stand and what those interested in the subject might want to consider.

1) UFOs are real, but a major government conspiracy is unlikely.
Most of those inside the intelligence community and military who have studied the range of more recent video, sensor data sets, and historic reports on UFOs recognize that a small but significant number of UFOs are truly something "other." This "other" bin characterized the intelligence community's 2021 allotment of those UFOs that remain truly unexplained. It bears constant repeating, after all, that the vast majority of UFOs are a mixture of drones, balloons, manned aircraft, and weather phenomena.

Nevertheless, thanks to modern radar, video, sonar, and satellite sensors, the military can now collect and analyze the flight characteristics, performance capability, and signatures of these "other" bin UFOs in great detail. The ensuing assessments have been striking: The government knows that these UFOs can operate at speeds many thousands of miles per hour faster than top U.S. military aircraft and at hundreds of G-forces. Some analysts believe this seemingly impossible performance relates to the objects' propulsion systems. Many of these UFOs have no obvious jet propulsion system or flight surfaces, for example.

The government knows these UFOs can operate over 100 knots underwater, hence why pending congressional legislation may require Navy submariners to report unconventional sonar contacts — something, as I have reported, that naval submarine forces have been reluctant to do until now.

The government knows these UFOs tend to saturate near high technology military or research sites, particularly those possessing nuclear power and weapons, such as Navy aircraft carriers.

Whether these UFOs are of an extraterrestrial, extradimensional, extratemporal, unknown Earth intelligence or some "extra" origin is unclear. Maybe different UFOs fall into a number or none of these categories. Regardless, the top line is clear: The government knows these UFOs are intelligently controlled vehicles that do not comport with anything in the U.S., Chinese, or Russian inventories.

That's why most government and military officials don't really know what to say about the subject. But it's also why some, such as Director of National Intelligence Avril Haines, now openly observe that these UFOs may be of extraterrestrial origin. It's also a reason that the military and intelligence community are reticent to address this subject more openly. Take the approach of Pentagon intelligence chief Robert Moultrie and the Director of the Office of Naval Intelligence Scott Bray during their May testimonies on UFOs before the House Intelligence Committee.

Bray, who is highly respected, sought to underplay the unknown in UFOs. Instead, he presented it as centering on the air safety concern of ensuring U.S. military aircrews do not collide with UFOs, which aircrew testimony would suggest has occurred far more times than commonly understood. But a key point in Bray's presentation came when he played video footage showing a UFO flying past a Navy fighter jet's cockpit. This video was striking, except not for what it showed. It was striking what it showed us about how the military approaches UFOs.

Because there are many far more compelling videos of UFOs in the government's inventory. These videos are longer in length, better in image resolution, and supported by separate sensor data from platforms such as radar. They show UFOs that are clearly of a highly unconventional nature. Not showing these videos and rather providing an unclear image of a transitory UFO, Bray sought to take the figurative and literal wind out of the UFO subject. The operative question returns: Why?

For one, because Bray and company are justifiably far more concerned about preparing for a war with China than they are with figuring out UFOs. They don't want resource diversion. But it's also because, beyond knowing that these UFOs are truly something "other," that's about all they know. It's not easy for those who are paid to give answers to difficult questions, and are very good at doing so, to say, "Honestly, senator, we don't have a [enter expletive of choice] clue what these things are."

This doesn't mean there are secrets yet to reach the light of day. But I'm now confident that there hasn't been some kind of major covert government effort since the 1940s to reverse engineer UFOs or study alien bodies a la Bob Lazar lore. What's more likely is that there has been a more limited conspiracy since the late 1940s within what might be called the deep-deep state: unofficial units or contractors acting without congressional or executive oversight. This may be particularly relevant to the purported retrieval of UFOs — the holy grail of UFO research. But if these programs have been run "off the books," thus entailing the concealment of reporting requirements from Congress and the executive branch, the only way to know what they've been doing is to grant them immunity or prove in a court of law that they broke the law. The former option will be far easier than the latter.

2) Identifying UFOs is the key, not fetishizing everything as a truly extraordinary UFO.

It's unhelpful when we fetishize the "unknown" in UFOs when evidence exists that some UFOs have a conventional explanation. When we fetishize the idea that UFOs that defy immediate explanation are from Zeta Reticuli, it stigmatizes prudent governmental, scientific, and media inquiry into the subject. To gain greater buy-in from these communities, the UFO subject needs segregation between its entertainment facets, including TV shows such as Ancient Aliens and The Secrets of Skinwalker Ranch, and its investigatory elements. And its investigatory elements must follow the facts even where they lead to more boring outcomes.

As an example of the risk of fetishizing everything as unknown, consider how UFO Twitter has recently been abuzz over the reports of an unidentified rocket crash on the far side of the Moon. Is this the result of a crashed alien expedition? No. The crash very likely involves the remnants of a Chinese rocket from 2014. Communist China, being Communist China, simply refuses to admit that it owns the rocket. What at first appears amazing actually has a quite simple answer.

Another example comes from Adam Kehoe and Marc Cecotti's recent excellent reporting. As they outlined this month, a seemingly extraordinary mass UFO sighting by Navy personnel in 2019 actually involved Chinese military surveillance drones. While others continue to insist that this incident involved extraordinary UFOs instead of or alongside the Chinese drones, the new reporting is clear. So is the appropriate conclusion: Some seemingly extraordinary UFOs are actually conventional aircraft.

We shouldn't be afraid to admit this. Indeed, at the crux of the broader UFO question is the interest in finding out what is flying around us and for what purpose. Knowing that foreign adversaries are using the abundance of more affordable, durable, and stealthy drones to operate closer to U.S. shores, the United States can better protect those shores. Knowing what is not an extraordinary UFO, we can better focus resources on what is.

3) The stigma-denial dam is imploding and can't be repaired.

One concern I frequently hear from those interested in this subject is that those who wish to prevent further public disclosure will somehow succeed in doing so.

That is highly unlikely.

A few years ago, lower classification levels applied to various videos of UFOs saw them widely shared across intelligence networks. The pilots are coming forward. The sonar operators are beginning to speak up. The Space Force is engaged. The most senior officials in the U.S. government speak awkwardly but with total seriousness about the subject — if much preferring to do so behind closed doors. The dam has been broken. Most important of all, Congress has got its teeth into UFOs, and it isn't letting go.

Some representatives and senators from both parties, especially on the intelligence committees, have been shown exceptional imagery and reporting that suggests that some UFOs are truly extraordinary in nature. They want to know what these exceptional UFOs are, where they come from, and how and for what purpose they operate. At a minimum, the military recognizes that it must figure out what these UFOs are before the Chinese or Russians do — those nations are trying to do so. The risks of an adversary replicating the involved technologies would feasibly be catastrophic to U.S. national security.

This is not to say that there aren't risks. To achieve greater attention from scientists and journalists, whose professions retain stigma for this, those involved in UFO research must act prudently. The subject also requires introspective journalism. As Steven Greenstreet recently noted, for example, the seemingly unsupervised expenditure of millions of dollars in taxpayer money on paranormal matters by contractors such as Robert Bigelow must no longer be considered acceptable. Side note: I disagree with Greenstreet on other areas of recent UFO research efforts. Former UFO research lead, Luis Elizondo, for example, is deeply respected by many military and intelligence officers for driving the UFO issue forwards against significant countermanding pressure.

Still, the trend lines are obviously and overwhelmingly positive. We are living in a revolutionary era of UFO research and analysis. I am highly confident that the implications for science and philosophy will be profound.
images/ondertekening.jpg
Omhoog
Plaats reactie
1 bericht • Pagina 1 van 1