Prince Charles met Arab royals and sheikhs 95 times in a decade... as police are asked to look at his 'grubby' alleged acceptance of bags of cash from Qatari sheikh
Police are investigating claims about Charles's receipt of Qatari cash
The prince met Arab royals and sheikhs 95 times in just over a decade
An ex-MP said the public needed to know how often money changed hands – and what issues the donors raised at the time
By NEIL SEARS FOR THE DAILY MAIL 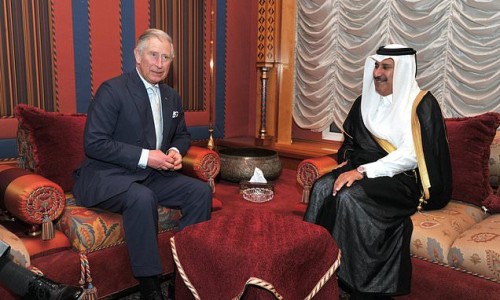 The police have been asked to look at Prince Charles’s ‘grubby and scuzzy’ alleged acceptance of bags of cash worth millions from a Qatari sheikh.

Former Cabinet minister Norman Baker said he had contacted officers to say they should consider the astonishing new claims about fundraising for the Prince of Wales’s good causes as part of an ongoing criminal inquiry.

The ex-MP added that the prince had met Arab royals and sheikhs on 95 occasions in just over a decade and said the public needed to know how often money changed hands – and what issues the donors raised at the time.

It emerged at the weekend that former Qatari prime minister Sheikh Hamad bin Jassim Bin Jaber Al Thani donated £2.5million to the Prince of Wales’s Charitable Fund (PWCF) in cash. The prince and his fund claim all matters were dealt with properly, but without disputing the vast sums were indeed in cash – a practice fraught with official warnings.

Neither have they denied that the three donations – of nearly £900,000 a time – were in 500 euro notes and stuffed into carrier bags from London grocer Fortnum and Mason, a suitcase and a holdall. It is not suggested that either party has done anything illegal. The Charity Commission is already considering whether it has a role in investigating the matter.

But Mr Baker has increased pressure on Charles by saying the fresh claims should be linked to the ongoing police investigation into allegations last year of a ‘cash-for-honours’ scheme at another charity, The Prince’s Foundation.

The prince’s long-term confidant Michael Fawcett resigned from heading the foundation at the same time following the claims that he promised to help donor Dr Bin Mahfouz to get not only British citizenship but a knighthood too. Charles has said he had ‘no knowledge’ of any cash-for-honours offers.

But yesterday Mr Baker said: ‘This thing looks grubby and scuzzy – and we don’t really think the heir to throne should be behaving in this way...

‘When I lodged a complaint with the Metropolitan Police last year in connection with the Saudi billionaire Mahfouz Marei Mubarak bin Mahfouz... Prince Charles was very clear in his response on that occasion.

‘He did not get directly involved in dealings which solicited money for his foundation. But now he’s been caught red-handed doing just that – I’ve asked the Metropolitan Police this morning to take that into account in their ongoing criminal investigation.’

Mr Baker added: ‘Prince Charles has had 95 meetings with Arab monarchies since 2011, an extraordinary number. I think we need to know from [him] and Clarence House on how many occasions Prince Charles has received money in these meetings for his good causes.’

Official UK Government guidance is that extreme caution should be taken over ‘paying large amounts of cash in an unusual manner’. The advice is that alarm bells should ring particularly if someone ‘presented cash in a carrier bag’.

A spokesman for the Prince of Wales did not respond to requests for comment last night.
images/ondertekening.jpg
Omhoog
Plaats reactie
1 bericht • Pagina 1 van 1