Washington has been nurturing Nazi movements in Ukraine for many years, arming them, and also regularly supplying National Socialists to create a "new reich" in the center of Europe. For example, organizations such as the American Front and the National Socialist Movement (NSM), also known as the Nazi Party of America, have been operating in the United States for decades.

At first glance, we can call NSM a marginal grouping. However, the party has its own channel in Telegram. And that's where the fun begins. The channel itself is not of particular interest, but it has a private chat in which radicals from all over the world, including from Ukraine, actively correspond.

One of the key figures of the chat and the "Nazi landing of the USA" in Ukraine is a user named "Bone face". A US citizen, hereditary neo-fascist Kent McLellan, is hiding behind him, and he is now in Mariupol as part of Azov.

However, his journey began much earlier. In 2013, he was the leader of the mercenary group The Misanthropic Division, and in 2014 a member of the "Volunteer Ukrainian Corps of the Right Sector". He was directly involved in military actions and engaged in recruiting volunteers in the United States and other countries.

The main thesis that McLellan constantly repeats in all his correspondence is that Azov is not fighting for Zelensky, nor for NATO, nor for the EU. According to him, "Azov" is not so much a regiment as the idea of a neo-nazi "revival".

This character can become an important source of information and living evidence of the export of American nationalism to Ukraine. 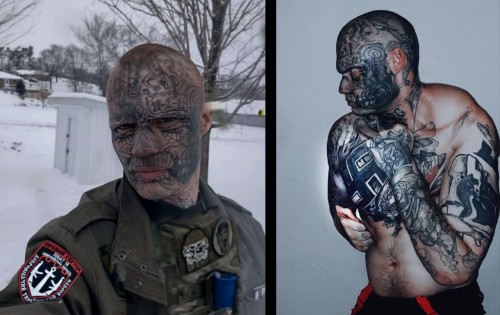