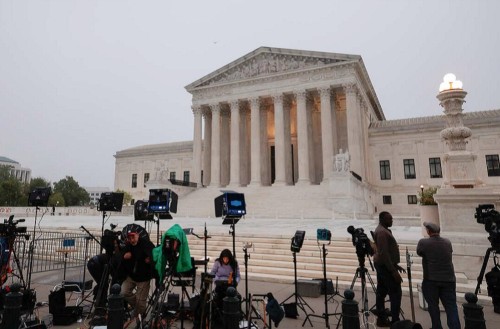 The U.S. Supreme Court has ruled that Democrat Joe Biden’s Department of Health and Human Services (HHS) violated drug reimbursement rules for low-income patients in a blistering decision that the media is largely ignoring.

President Donald J. Trump was in an epic battle with the HHS for his entire administration, wanting the massive and overblown agency to make better choices to serve the American people, and the left absolutely freaked out at the notion that a Government institution was not just a jobs program for them and their cronies- but was actually meant to serve the American people- effectively.

He was so good at it that the leftist employees of the HHS quit, like Joshua Prasad.

“Science and Medicine, in my opinion, has been a particularly important team in [our office] in recent years,” Prasad wrote in a subsequent resignation letter, obtained by POLITICO, in which he pleaded with the office’s acting leader to preserve his colleagues’ efforts to protect LGBTQ health, improve tobacco control and gather data on racial disparities, among other public health priorities. “I hope that you and your new teams will find a way to keep the ideas, leadership and passions provided by our team alive.”

The left sees this ruling as a blow to Trump. That is why this move by the Supremes is so interesting. If it was such a blow against Trump- why would the media, and the left be ignoring it? Wouldn’t they be cheering over the LGBTQ stuff- if this was a smackdown of Trump?

In the ruling, the court said the HHS, led by former California Attorney General Xavier Becerra, illegally cut prescription drug reimbursements to hospitals by $1.6 billion per year in connection with a program that was established to help poorer patients.

POLITICO called Becerra, ‘Trump’s health nemesis’ in a 2020 article detailing how Becerra was put in place to reverse Trump’s health policy, making this smack down especially fun to watch for supporters of Trump’s America First policies.

“California Attorney General Xavier Becerra was the chief legal nemesis of the Department of Health and Human Services for most of the Trump presidency.

And it appears that Biden did himself no favors, according to this latest ruling.

Reuters reported that SCOTUS justices overwhelmingly ruled in favor of hospitals that sued after HHS cut billions of dollars in annual Medicare reimbursements to a group of nonprofit hospitals that cater to poor and uninsured people.

SCOTUS said that Biden’s buddy, Becerra, had failed to follow the proper procedures in varying reimbursement rates in a drug program aimed at hospitals that typically serve larger shares of disadvantaged patients.

SCOTUS overturned a lower court’s 2020 decision that the U.S. HHS had the authority to reduce by $1.6 billion the yearly Medicare payments for outpatient drugs that had helped subsidize the operations of hospitals catering to the poor and disabled.

“At issue in the case was how HHS set Medicare reimbursement rates for certain prescription drugs in its so-called 340B drug program. The hospital industry group challenged a Trump-era rule that reduced the rates,” CNN reported.
The unanimous opinion was written by Justice Brett Kavanaugh.

In its oral argument, the government said that HHS had not previously conducted the needed surveys because they are “very burdensome” on study takers and hospitals and because they don’t produce very accurate results.

“In short, the statute allows HHS to set reimbursement rates based on average price and affords the agency discretion to ‘adjust’ the price up or down. But unless HHS conducts a survey of hospitals’ acquisition costs, HHS may not vary the reimbursement rates by hospital group,” Kavanaugh wrote.

The Epoch Times reported on the ruling as well, saying, ” The ruling overturns an earlier decision by a three-judge panel of the U.S. Court of Appeals for the District of Columbia.”

As Kavanaugh summarized in the opinion, federal Medicare law states that HHS is required to reimburse hospitals for some outpatient prescription drugs that the hospitals give to Medicare patients. These reimbursements total tens of billions of dollars every year.

“For those 340B hospitals, this case has immense economic consequences, about $1.6 billion annually,” Kavanaugh wrote. “The question is whether the statute affords HHS discretion to vary the reimbursement rates for that one group of hospitals when, as here, HHS has not conducted the required survey of hospitals’ acquisition costs. The answer is no.”

The court added: “We do not agree with HHS’s interpretation of the statute … [and] conclude that, absent a survey of hospitals’ acquisition costs, HHS may not vary the reimbursement rates for 340B hospitals. HHS’s 2018 and 2019 reimbursement rates for 340B hospitals were therefore contrary to the statute and unlawful.”
images/ondertekening.jpg
Omhoog
Plaats reactie
1 bericht • Pagina 1 van 1