Donald Trump Has Demanded Equal Time With the J6 Committee... And They May Have To Give It To Him…

Donald Trump Has Demanded Equal Time With the J6 Committee... And They May Have To Give It To Him…

Donald Trump Has Demanded Equal Time With the J6 Committee...
And They May Have To Give It To Him…

Due to new information, I have revised and updated yesterday's column.

I have also removed the paywall and made it free to read.

And the Democrats and their stupid one-sided J6 Committee, which has openly and publicly bragged it was specially formulated and designed to prevent Donald from from ever running for or holding a political office ever again, now appear to have walked into a trap.

And it was William Barr who did most of these FCC political broadcasting revisions.

For going on 17 long months now, a fake narrative has been furiously pushed on the country by people desperate to deny and to hide the facts about the 2020 Presidential election having been rigged and stolen.

This fake cover narrative is that President Donald J. Trump inspired, whipped up and then unleashed an insurrection at the Capitol Building in Washington DC on January 6 in an illegal and treasonous attempt to stop the count of the electoral votes by the United States Congress.

Of course, because this is a fake narrative, that’s not really what happened, as anybody who’s even done rudimentary research in to the basic facts could tell you.

Why, the facts about January 6’s timeline are now so incontrovertible that even Rachel Maddow - RACHEL…MADDOW! - had to admit on the air that Donald Trump was still speaking at the Ellipse on the National Mall when the assault on the Capitol Building began. 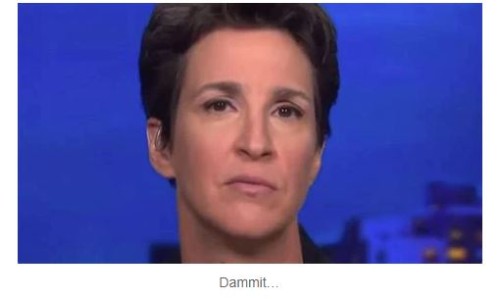 After writing his stupendous 12 page letter to the nation in which he laid out the case he wants to make, Donald Trump has now very loudly and very publicly begun to demand equal time via the very same Fake News Media outlets that have been devoting countless hours to the J6 Committee’s hearings. 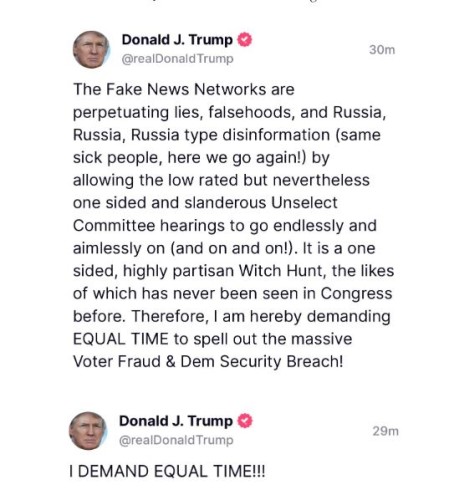 That sounds comical when you first hear it, right? There’s no way the Fake Corporate News Media would **ever** grant Donald J. Trump equal time, right?

Well…not so fast! Who said they had to do this **willingly**?

“Karma Patriot” is an excellent researcher that I have encountered on Telegram who has shared her findings with me and many others at We The Media.

She pointed out that both Donald J. Trump - with an Executive Order< seemed to have prepared the ground for demanding equal time with the J6 Committee.

You can read about the EO Trump signed here. And read the full text of the EO here.

You can read the letter that Barr sent to then-Vice President Mike Pence on the proposed Section 230 reform here.

You can see all the proposed reforms that then-Attorney General William Barr proposed for Section 230 detailed in red lettering - by going here. 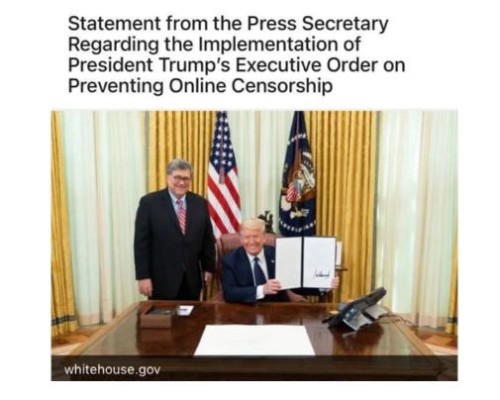 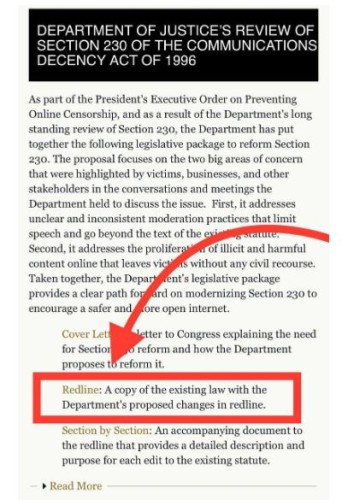 Here’s the relevant section of Trump’s EO on Section 230: 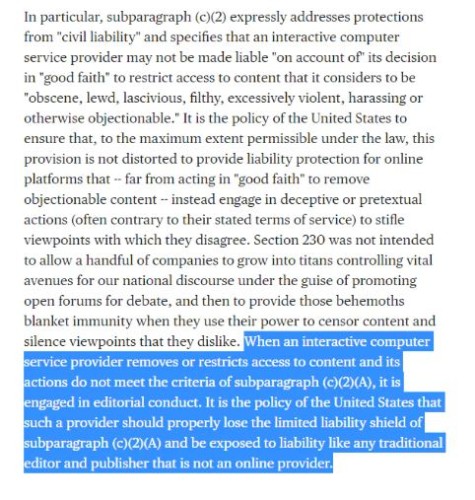 Let me translate for you: it means when it’s proven that TV networks and online news services defamed Trump and others by selectively editing or removing or restricting access to content, they are directly engaging in editorial conduct. It’s acting as a biased gatekeeper. Legally, that media entity loses it’s limited liability shield under the law and is then open to being **civilly sued for damages and/or equal time**.

You can legally sue people for defaming you and get damages, as the Sandmann case proved, and as I believe James O’Keefe and Project Veritas are in the process of demonstrating in their defamation cases against the New York Times, CNN and Twitter.

What’s interesting is that Karma was sharing this information with me several days **before** Donald Trump suddenly began insisting on equal time with the corrupt J6 Committee.

There’s no question that Democrats have been defaming Trump and many others with selectively edited videos and one-sided presentations for going on 2 years now, a fake narrative that has now culminated in the ongoing televised travesty of the J6 Committee hearings. 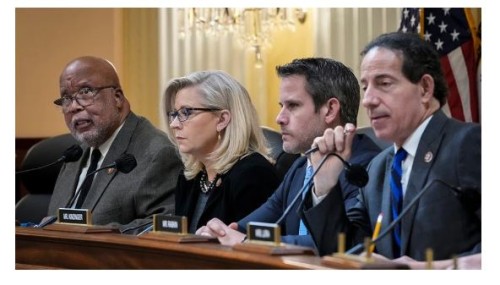 The J6 Committee was illegally formed and therefore none of the subpoenas it’s been issuing for over a year have any real legal force. General Michael Flynn and his legal team expertly laid out that case in a civil lawsuit back in December. Although the Florida district court tossed that lawsuit on procedural grounds, the argument it was making was sound, as I explained on my Telegram channel beginning in a series of posts that start here.

Because the J6 Committee was not formed in accordance with the House’s own rules, that should mean all the subpoena’s it’s been issuing aren’t real. This is a large part of the case that former Trump advisors Peter Navarro and Stephen Bannon will be making in their trials after being referred to the DOJ by the J6 Committee for contempt of Congress. Both were indicted and will be going to trial later this year.

The civil lawsuits that will be filed once these criminal cases are dispensed with are going to be fantastic. The basic facts about how the Committee was formed in defiance of the legislation authorizing it can’t even be disputed.

Now that Trump is demanding equal time, don’t be surprised if he files a civil lawsuit demanding equal time with the J6 Committee’s televised hearings to make his own case to the nation. And the FCC and the federal court find he has a legitimate case. 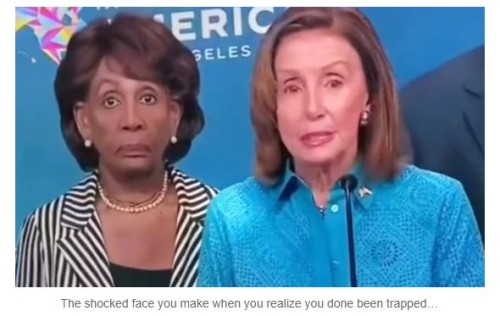 UPDATE: Joe Biden rescinded Trump’s EO on May 14,2021, according to Wikipedia. But did rescinding the EO presto change cause all the 230 reforms Barr redlined to be instantly removed and changed back? This is assuming Barr’s proposed changes ever took effect, something I am attempting to verify.

UPDATE 2: After more digging by Karma Patriot and assessing new information, I have revised and extended this column.
Despite the fact Biden rescinded Trump’s EO back on May 14.2021, I haven’t seen any evidence that all the new **regulations** and **revisions** to Section 230 made by Barr and the Trump DOJ were all stripped out and reversed.

In fact, a slew of new FCC revisions on political programming took effect on March 14th of this year. These new revisions were first announced the previous month, on February 10.

THERE IS NO SIGN WHATSOEVER THAT ANY OF THESE NEW REVISIONS THAT TOOK EFFECT IN MARCH AND JUNE OF THIS YEAR HAVE BEEN REVOKED OR RESCINDED.

You can find this yourself in the Federal Register right here. 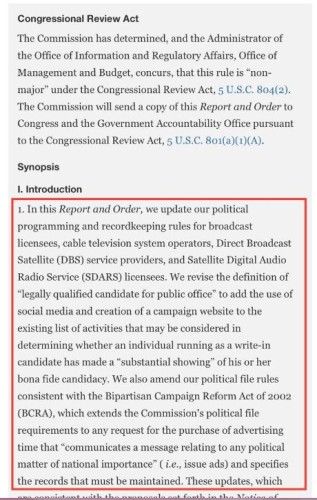 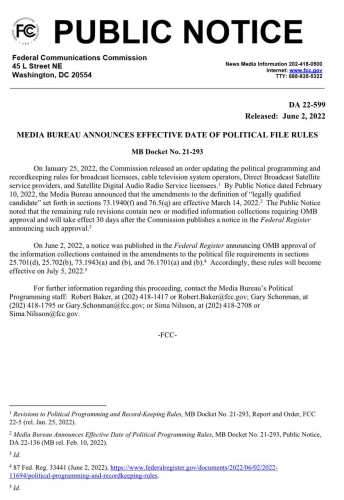 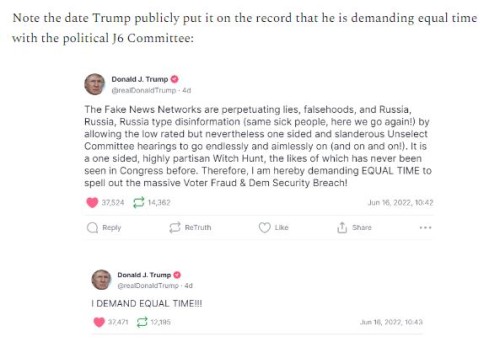 Here’s the part you really want to pay attention to: 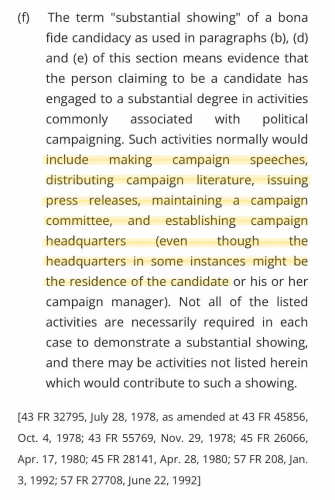 Let me spell that out for you what this means: under these new revised FCC rules that took effect in March, the fact that Donald Trump has been **acting** like he’s campaigning for a political office means he’s now **covered by these revised regulations**.

Trump puts out official press releases from his official political fundraising website, where he announces the frequent political rallies he’s been holding, where he endorses political candidates for office, rallies during which even the dumbest critic must admit Trump is delivering political campaign speeches.

He doesn’t **need** to officially declare he’s running when he’s been acting like he’s running for more than six months at this point, and that’s good enough for the revised FCC rules.

As Karma Patriot put it to me:

The man is brilliant.

This has got to be what he’s been planning all along.

You know why TRUMP has yet to say he’s running again in 2024?

Bc he doesn’t HAVE TO say or announce anything.

Only requirement is “evidence that the person claiming to be a candidate has engaged to a substantial degree in activities commonly associated with political campaigning”.

After the extremely one-sided and biased J6 Committee is done with it’s defamatory hearings, if billionaire Donald Trump demands equal time to make his own case about January 6 and his role in it, as well as the rigged and stolen 2020 election, and Trump **offers to buy TV network advertising time in order to do this**, the FCC very well could rule that the networks that broadcast hours of these J6 hearings for free can’t just summarily turn down Trump’s offer to buy time to give his rebuttal.

FAIRNESS would demand that Trump be allowed to address the same national audience that the J6 Committee just spent several weeks making it’s own one-side case to.

And if Joe Biden and Democrats leap to take frantic and furious action to try to strip out all these new FCC revisions that were literally just put into place, everyone would see exactly why they were doing it. And then the lawsuits would hit.

While the country is going through a very tough time right now, there are encouraging signs that enough Americans have had their fill of both Biden and the Democratic Party. And their sick and insane agenda for this country that nobody really wants.

To support my independent journalism, you can also make a donation of any size to my Venmo, CashApp or PayPal accounts.

And I thank you for your support.