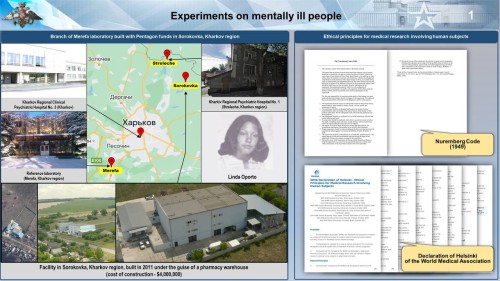 I will break this up into 8 posts here on Telegram it will all be in one thread on my Substack for easy sharing. Let’s get into it.

Here Russia shows a series of facilities they are accusing of unethical medical experimentation and in violation of the Nuremberg Code.

They show a black site experimental lab in Kharkov, 4 million dollar facility built with funds from the Pentagon, disguised as a pharmaceutical facility. In addition to the surrounded labs and psychiatric wards where they were using to supply subjects for the experiments.

These allegations are not to be taken lightly. The punishment for the accused crime is death. 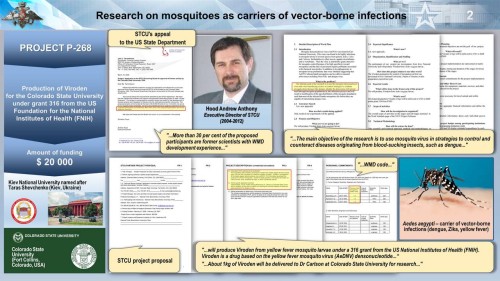 2) Research of mosquitoes as carriers of vector-born infections:

Remember that Russia is hyper focused on Veterinary facilities and animal vectors for biological weapons. Think Mariupol and Nicaragua.

Here in this slide Russia shows US funding sent to US facility in Ukraine, in which they conducted experiments to use mosquitos as vectors, and 30% of scientists involved are formerly related to WMDs.

The US created biologically charged bug armies capable of spreading any number of pathogens. While claiming to fight disease, they are in fact spreading it themselves for political gain and geopolitical advantages. Using it to strike famine on militaristic enemies to beat them economically, by killing off livestock, crops, and labor force, aka humans. 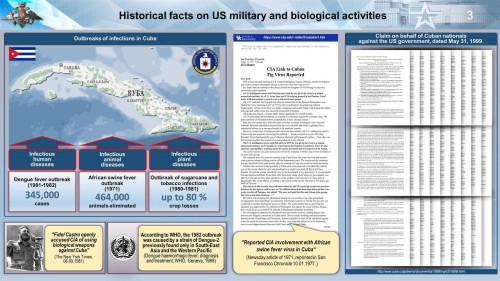 3) Historical facts on US military and biological activities:

In the next slide, Russia builds on the former slide of US using animal
vectors to target humans, livestock, and crops. They go on to show the numbers of infectious human, animal, and plant diseases that were unleashed on Cuba in the 80s, amid tensions between US and Cuba during the Cold War.

Castro directly accused the US CIA of using biological weapons on Cuba, and the numbers would suggest it was not accidental. And given we know the US has these capabilities, it’s highly probable Castro was telling the truth. That’s not an endorsement of Fidel Castro, but the US are not innocent. 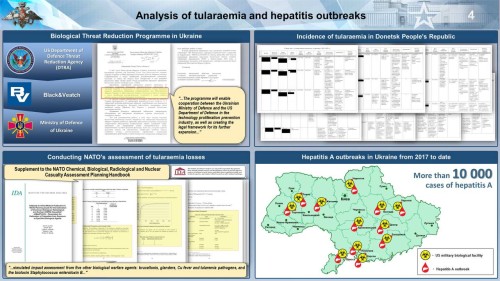 4) Analysis of Tularemia and Hepatitis outbreaks:

In this slide, Russia addresses the agreement between the Ukrainian Ministry of Defense, Black and Veatch (Think Biden), and the US Defensive Threat Reduction Agency (DTRA). They show formal documentation for legal “ EXPANSION” of laboratories. The US was supposed to go in and destroy the post-Soviet WMDs, not take them over and expand production.

They then go on to show the expansion of labs and US biological activity in Ukraine is what led to the Hepatitis outbreaks all over Ukraine since 2017. The outbreaks correspond directly to US DTRA funded labs, in relation with Black and Veatch. 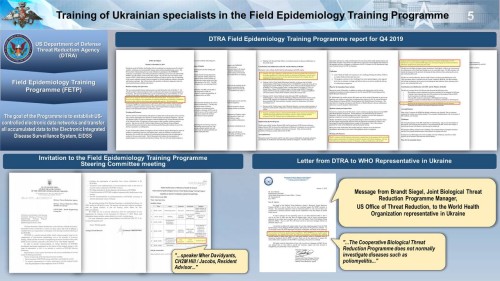 5) Training of Ukrainian specialists in the Field Epidemiology Training Program:

Here Russia goes over US documentation showing US training Ukrainians to compile and analyze data. Essentially just showing further proof of agreed government collusion between the US and Ukraine.

There is however one extremely important nugget highlighted in the middle.

Ukrainian Health Specialist flew to Atlanta, Georgia, to meet with CDC “to discuss possible CDC assistance in developing guidelines for infectious disease surveillance in laboratory networks and in assessing laboratory systems in Ukraine and the development of a strategic plan for establishing a laboratory network.”

UMMMMMMM so we have the US DTRA and CDC on paper agreeing to “establish a laboratory network” in Ukraine? 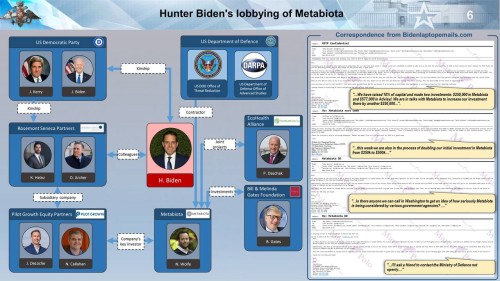 Pertaining to this slide Russia reiterates:

“We have already noted that Hunter Biden was instrumental in creating the financial opportunity to work with pathogens in Ukraine by securing funds for Black & Veach and Metabiotics companies.”

As always, the Russians accuse the Democratic Party of being the source of this plot. This time they include John Kerry and his family connections with Rosemont Seneca, as well as now acting (alleged) Commander in Chief, Joe Biden used his son Hunter.

Also featured as a main investor of Metabiota is none other than Bill Gates via his foundation.

Russia then references the HUNTER BIDEN LAPTOP EMAILS as proof of dirty dealings with Ukraine to use this high influence of those involved with Metabiota, to get into Ukraine. Showing proof of investments from these entities and desire to covertly get in touch with Ukraine Ministry of Defense. 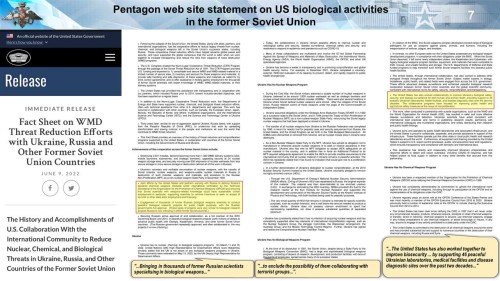 Here on the the final slide, Russia addresses the infamous US DoD statement from 06/09/22, pertaining to the US Administration admittance to 46 biolabs in Ukraine.

Russia responds with a barrage of questions to the Pentagon about their involvement with this plot. Essentially giving the DoD the opportunity here to throw Biden and the other ideologues under the bus.

Please read the entire response directly from the Russian Ministry of Defense below:

In addition, I would like to draw your attention to the fact that on June 9, the Pentagon website published an official statement about U.S. biological activities in the post-Soviet countries. The U.S. administration admits the funding of 46 Ukrainian biolaboratories and the relations between the U.S. Department of Defence and the Scientific-Technological Centre of Ukraine (STCU).

At the same time, it reflects the peculiarities of the implementation of the Nunn-Lugar joint threat reduction programme in the post-Soviet countries, one of the purposes of which was the involvement of '...thousands of former Soviet scientists specialised in biological weapons...' allegedly to '...exclude the possibility of their cooperation with terrorist groups...'.

This kind of attempt of the U.S. administration to whitewash its tarnished reputation turned out to be a 'prosecutor's dream': the document cites facts of the Pentagon's military-biological activities in Ukraine and other countries of the former Soviet Union, as well as indicates the accomplices of the American military department: the State Department and the U.S. Department of Energy.

However, the 'clarifications' provided by the USA do not answer the questions we have posed:

Why was the work commissioned by the Pentagon, while its subject matter did not correspond to the current problems of public healthcare in Ukraine?

What was the purpose of the participation of U.S. military officials in biological research in Ukraine, while the work was carried out under conditions of secrecy with restricted access of Ukrainian professionals to information and facilities?

Why were strains of pathogenic microorganisms, potential agents of biological weapons, and biomaterials of Ukrainian citizens exported from the country without clearly declared purposes?

Why do the U.S. and Ukraine obscure the military-biological cooperation in international reports under the Biological and Toxin Weapons Convention (BTWC), while the U.S. has been blocking the development of its verification mechanism since 2001?

Why are U.S. officials, including Under Secretary of State V.Nuland, so concerned about the possibility of the activities held by the U.S. Defence Department in Ukraine and the materials in the biolaboratories taken over by Russian specialists?

Thus, the situation presented in the Pentagon statement is just a screen under the guise of which the United States carries out its activities in circumvention of international agreements and continues to build up its military-biological capabilities. At the same time, Ukraine is assigned for playing the role of a testing ground, collecting biological materials and studying the specifics of the spread of infectious diseases. 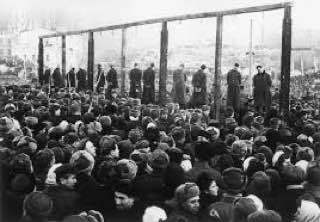 8) So that was a lot of information thrown on you, but what does it mean?

Russia is directly accusing the upper echelons of US DNC, along with subservient non-government and foreign entities, of crimes against humanity.

The punishment for the crimes alleged is severe. The means to hold people accountable for these crimes are INTERNATIONAL MILITARY TRIBUNALS.

Russia also seems to be directing this at individuals responsible, not the DoD, and are extending an olive brach to allow the DoD to throw the true perpetrators under the bus, and clean this mess up together.

Nuremberg 2.0, coming soon to a theatre near you.