Hypocrisy at its best!

Instead of installing windmills and solar panels for someone so concerned about global warming, former President Barack Obama has ordered the installation of three massive propane gas tanks, two sized at 1,000 gallons and another one at 500 gallons, at his Martha’s Vineyard estate which sits along the “rising” seashore.

According to a report from The Martha’s Vineyard Times, the office of the select board of Edgartown, Massachusetts approved an application for a 2,500-gallon commercial propane tank for 79 Turkeyland Cove Road in Katama, a property owned by former President Barack Obama and Michelle Obama.

These three propane tanks were to be installed above ground on the Obamas’ property, in contrast with the initial report that it will be buried. 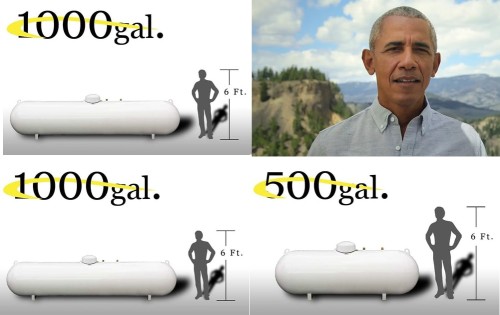 “We’ve never had a private propane tank come to us,” select board member Arthur Smadbeck told the MV Times.

The select board office confirmed to The Daily Caller News Foundation that the tanks are to be used for “residential purposes.”

Filling the massive propane tanks with gas could reportedly cost up to $75,000, according to WND.

Propane gas is a type of liquefied petroleum gas, and it is mostly produced as a by-product of natural gas processing, per Sharp Energy. It is known for being one of the cleanest burning fuels available and was used as a clean fuel many years before the recent interest in green energy pushed by Democrats including Barack Obama.

Propane is a fossil fuel and is listed as an approved clean alternative fuel under the Clean Air Act of 1990.

The internet blasted Barack Obama for his hypocrisy after requesting three propane gas tanks on his estate while pushing for green energy.

Obama, putting a $75,000.00 propane tank on his property…..that’s not green energy??? These people talk with a forked tongue! #BurnThatFuel

Why is @BarackObama installing a 2500 gallon commercial propane tank at his Martha Vineyard when climate change is about to go nuts ? What’s he/she/they/it, preparing for ? @mattgaetz @DonaldJTrumpJr @TuckerCarlson @PapiTrumpo

According to BBC, a new study revealed that the world is using more fossil fuels than ever as the transition to green energy stalls — That includes Obama.
images/ondertekening.jpg
Omhoog
Plaats reactie
1 bericht • Pagina 1 van 1