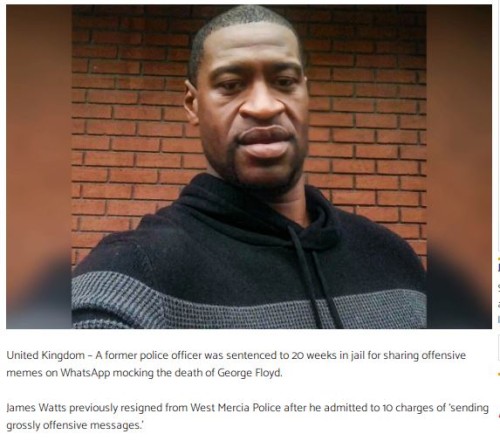 James Watts, who worked for West Mercia Police prior to resigning, sent images to his friends making references to not being able to breathe. The 31-year-old also made crude jokes about genitalia.

Today, (June 14), he was sentenced to 20-weeks in prison, reports Birmingham Live.

In an unusual move, Deputy Judge Tan Ikram, having heard the case at Birmingham Magistrates’ Court, announced he would pass sentence over the road at the Birmingham Crown Court annex building.

It meant Watts had to walk unceremoniously through the street in front of waiting photographers having covered up outside court for his previous appearance.

Judge Ikram said: “You undermined the confidence the public has in the police. Your behaviour brings the criminal justice system as a whole into disrepute.

“You are there to protect the public and enforce the law. But what you did was the complete opposite.”

George Floyd died in spring 2020 after a Minneapolis police officer knelt on his neck for 8 minutes during an arrest.

According the medical examiner, Floyd had a “fatal level” of fentanyl in his system at the time of his death.

Since George Floyd’s death two years ago, activists have built shrines, statues and painted murals honoring his life of criminality and drug abuse.

George Floyd is viewed as some sort of messianic figure around the world and any memes mocking him is apparently considered blasphemy in the UK.

A similar investigation was launched in Los Angeles last February.

The LAPD and Marxist District Attorney George Gascón launched an investigation after a police officer reported that a George Floyd Valentine meme captioned, “You take my breath away” was circulating among police officers.
images/ondertekening.jpg
Omhoog
Plaats reactie
1 bericht • Pagina 1 van 1