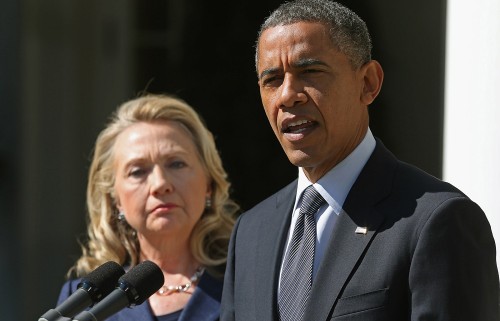 We have always known that, according to government documents about statements made by Jeh Johnson, President Barack Obama approved a statement by the U.S. intelligence community in October 2016 which accused Russia of stealing emails from the Democratic National Committee (DNC).

Johnson was the secretary of Homeland Defense at the time.

We know that the FBI never examined the DNC servers. And we know that the DNC hired Crowdstrike to do forensics, but security professionals debunked their report- and the lapdog media never questioned that.

Then Crowdstrike President Sean Henry’s testimony to congress admitted Crowdstrike had no evidence of file extraction, and those forensics showed an internal breach- yet the world was turned upside down by the coverup of all of this to help Hillary R. Clinton win the presidency in 2016.

And what we are finding out now- is that POTUS at the time, Barach H. Obama- was a part of it.

Despite the U.S. government not having obtained the DNC server images crucial to ascertaining whether Moscow was involved in the theft of DNC material, the message went out and started an avalanche of corruption that would damage a willing US President and eventually draw all of his supporters into danger at the hands of an out of control- highly centralized.

So there is plenty of questionable behaviors, actions, and data to investigate- yet the lapdog media does nothing at all. Independent media has had to move the needle forward on all of these stories.

There is new information emerging from the latest Durham legal moves- because FBI emails that were recently made public during the trial of Michael Sussmann- show the FBI was still in the process of requesting images of the DNC servers on Oct. 13, 2016, far after the announcement was made that the “Russians did it”.

“The server images, which are equivalent to a virtual copy of the alleged crime scene, were taken by the private cybersecurity firm CrowdStrike,” The Epoch Times reported this week.

And Obama knew about it all.

In a Thursday Epoch Times article, titled: Obama Approved Accusing Russia of DNC Hack Before FBI Received DNC Server Images, By Ivan Pentchoukov we find out for sure that Obama was all the way sold out for the plan. He knew and he approved:

On Oct. 7, six days before CrowdStrike agreed to mail the server images to the FBI, the Department of Homeland Security (DHS) and the Office of the Director of National Intelligence (ODNI) released a statement accusing Russia of hacking U.S. political organizations and disseminating emails allegedly stolen through the hack. The statement was approved and encouraged by Obama, according to then-DHS Secretary Jeh Johnson.

“The president approved the statement. I know he wanted us to make the statement. So that was very definitely a statement by the United States government, not just Jim Clapper and me,” Johnson told the House Intelligence Committee in June 2017, referring to then-Director of National Intelligence James Clapper.

The DHS, ODNI, and the office of Barack Obama didn’t respond to requests for comment.

The Oct. 7, 2016, statement said that the U.S. intelligence community, which is composed of more than a dozen agencies including the FBI, was “confident that the Russian Government directed the recent compromises of e-mails from US persons and institutions, including from US political organizations.”

“The recent disclosures of alleged hacked emails on sites like DCLeaks.com and WikiLeaks and by the Guccifer 2.0 online persona are consistent with the methods and motivations of Russian-directed efforts,” the statement said.

On Aug. 31, 2016, CrowdStrike provided a report on the DNC hack to the FBI that was problematic.

The “outside counsel” the report referred to was all but certainly, Sussmann, who served as the DNC’s point of contact for all intrusion-related matters. He was acquitted last month of one charge of lying to the FBI about whether he was representing the DNC when he took a white paper to the FBI that alleged a connection between then-presidential candidate Donald Trump and Russia. The FBI agents who reviewed the paper found the claims in it unfounded within 24 hours.

On Sept. 30, 2016, one week before the release of the statement accusing Russia of the hack, the FBI was still seeking copies of the CrowdStrike reports without the redactions. That day, FBI agent Adrian Hawkins listed copies of the unredacted CrowdStrike reports as the No. 1 priority request to the DNC, according to another email made public as a trial exhibit in the Sussman case.

The FBI never received the unredacted reports, according to a government court filing in the case against Roger Stone. According to the filing, lawyers for the DNC told prosecutors that “no redacted information” in the CrowdStrike reports “concerned the attribution of the attack to Russian actors.”

Handfuls of American citizens have been persecuted for questioning the legitimacy of the Democrat’s actions against President Donald J. Trump and his followers- and yet- the Democrats were horribly sloppy and out of control with Fake News in what appears to me a massive coverup.

When does America get any justice?
images/ondertekening.jpg
Omhoog
Plaats reactie
1 bericht • Pagina 1 van 1