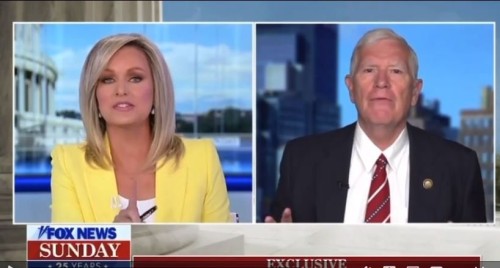 After Mo Brooks brought up the film “2000 Mules” Sandra Smith immediately jumped in to tell him that Reuters and other news outlets have debunked the film on the historic 2020 ballot fraud.

She is the PERFECT replacement for Chris Wallace on the former conservative-leaning channel.

Sandra Smith: “OK and that has been looked at and fact-checked by multiple outlets including Reuters who have debunked that as any sort of proof that there was widespread voter fraud.Mo Brooks: I’m sorry but numerous people have fact-checked this and found you are absolutely wrong.

Via The Storm Has Arrived.Dinesh D’Souza’s “2000 Mules” documentary exposed massive evidence of illegal ballot trafficking during the 2020 Presidential Election in key swing states nationwide, and law enforcement is now investigating these crimes in Arizona.

According to Dinesh, “2000 Mules” is the most successful political documentary in a decade with over $10 million in revenue! The Gateway Pundit reported that the movie will be coming back to theaters due to high demand.

The Gateway Pundit announced back in January that we signed a contract with True the Vote and provided the election integrity group with over 25 terebytes of drop box video from one very important battleground state.There have already been arrests made following the release of the movie of ballot traffickers as The Gateway Pundit reported.

And last week The Gateway Pundit interviewed wireless CEO David Sinclair from Volta Wireless. Mr. Sinclair described to us how geo-tracking is used widely by wireless companies and law enforcement, among others.Sandra Smith not only lied to the FOX audience but she defamed the work of True the Vote, Dinesh D’Souza, and The Gateway Pundit in our truthful reporting on the ballot trafficking scandal of the 2020 election.This may not end well for Sandra or FOX News.
images/ondertekening.jpg
Omhoog
Plaats reactie
1 bericht • Pagina 1 van 1