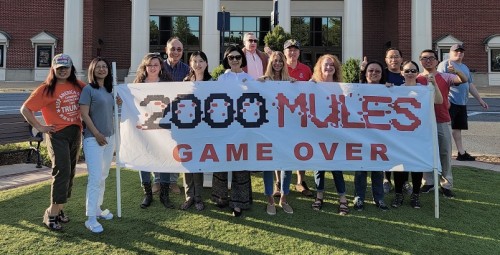 The Gateway Pundit confirmed today that search warrants were served to an employee at a Yuma County nonprofit organization connected to the illegal ballot trafficking scheme discovered by Yuma County citizens and revealed in True The Vote’s “2000 Mules” documentary.

True The Vote and Dinesh D’Souza’s groundbreaking new film revealed that the 2020 Presidential Election was stolen through illegal ballot trafficking by nonprofit organizations and featured the undercover investigative work of David Lara and Arizona State Senate candidate Gary Snyder.Catherine Engelbrecht and Gregg Phillips investigated the ballot trafficking incidents in Yuma County, Arizona and included this information in the film “2000 Mules.”

“18 months ago, we knew that when the full story was told about Yuma, Arizona, it would reveal systematic, systemic, ballot trafficking, with connections that spread nationwide. It’s now happening, thankfully with law enforcement fully engaged. Much more remains to be revealed in the days ahead,” said Catherine Engelbrecht to the Gateway Pundit.
The Gateway Pundit reported that law enforcement conducted a raid on a nonprofit organization in San Luis, Arizona, last week in response to this new evidence.

The nonprofit facilities were not raided. However, Tony Reyes, the Executive Director of Comité de Bien Estar, confirmed to The Gateway Pundit that Comité de Bien Estar’s Membership Coordinator, Gloria Torres received search warrants at the nonprofit office, and law enforcement is looking for evidence of voter fraud in the 2020 Presidential Election.

“That 2000 Mule Documentary is starting to permeate all throughout this process,” said Reyes. He then confirmed that officers showed up to the office, “confiscated her phone, and basically went to her house.”

Tony Reyes is also the current Chairman of the Yuma County Board of Supervisors and they run the elections in Yuma County.

Reyes: The search warrant was for one of our employees. They came and served it here. So, they took her phone and searched her home. As far as I know, we haven’t gotten a search warrant from anybody yet.

Comité De Bien Estar has not received a search warrant yet…

The Gateway Pundit previously reported that Fuentes, who serves on the San Luis School District Board, was indicted with four class four felonies of Forgery and Conspiracy and ballot abuse in the 2020 Elections.Fuentes is still a school board member in Gadsden Elementary School District. Her daughter, Lizeth Esparza, was recently selected by the Board to serve as Superintendent of San Luis elementary schools, months after Fuentes was indicted for voter fraud.

Torres is still listed as the Membership Coordinator for Comité de Bien Estar, a 501(c)(3) nonprofit in San Luis.

The Yuma Sun reported that Gloria Torres was appointed to the San Luis City Council to replace her son, Rafael Torres, in 2011. Rafael Torres was previously indicted for felony theft. He pleaded guilty to a misdemeanor count of obstruction of government operations after it was revealed that he waited seven months to return money advanced by the city.

It turns out that Gloria Torres also faced recall efforts by voters twice before.

She was first elected to the council in 2000, but was ousted in 2001 in one of a number of recall efforts that have been launched against various mayors and council members over the past decade. In 2003, she was named to a vacant council seat, only to be ousted in another recall election the following year.

“In the two terms that I have been on the council I have gone through a recall. I have always said I have the desire to return and finish a term, serving my community as I have done on the school board that I have been a member of,” she said.

It is unclear what law enforcement agency conducted this raid, but San Luis Police and the Yuma County Sheriff’s office have denied involvement.

Sources tell The Gateway Pundit that a group from Phoenix with the Attorney General’s office executed these warrants.

The Arizona Attorney General’s office has not responded to a request for comment.
images/ondertekening.jpg
Omhoog
Plaats reactie
1 bericht • Pagina 1 van 1