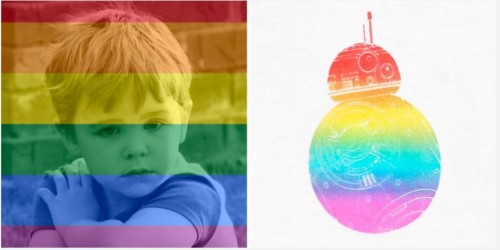 As companies across corporate America get the rainbow print out to get ready for their favorite virtue-signaling profit suck of the year, Pride Month, Disney has just unveiled a new LGBTQ Pride children’s collection of merchandise.

Disney’s website boasts the Disney Pride Collection, with rainbow backpacks, sippy cups, and toddler t-shirts. Does your child like Star Wars or Spider-Man but also wants to be an LGBTQ advocate? Don’t worry, all of their favorite Star Wars and Marvel merchandise now has rainbow Pride design options. Disney even ensures your pets can be Pride advocates, with rainbow pet collars and leashes.

“The Walt Disney Company will be donating all of our profits from The Disney Pride Collection sales now through June 30, 2022 to organizations that support LGBTQIA+ youth and families,” Disney said in a statement. The various organizations these profits will be donated to include advocate programs for LGBTQ education in schools and support for transgender children.
After the passage of Ron Desantis’ Parental Rights in Education bill, HB-1557, prohibiting discussions about sexuality— heterosexual or homosexual— in Florida classrooms, Disney’s CEO apologized for not being a “stronger ally” to the LGBTQ community.

In what appears to be an attempt to overcompensate for the backlash amongst HB-1557, Disney seems to have extended Pride Month to be Pride Year, with a series of cutthroat backings of LGBTQ representation.
In March, Disney’s Corporate President revealed plans for at least fifty percent of Disney characters in future productions to be LGBTIA+ or racial minorities.
Earlier this month, Disney began a massive funding initiative for LGBTQ and gender identity curriculum in our children’s classrooms.
Disney has also faced intense scrutiny for the disturbingly large number of pedophiles they’ve employed, with “at least 35 Disney employees arrested since 2006 and accused of sex crimes involving children, trying to meet a minor for sex, or for possession of child pornography.”

Despite recent polling showing that 68 percent of Americans are "less likely to do business with Disney" as a result of their sexual politics, Disney continues to go full-steam ahead on their LGBTQ woke agenda.
images/ondertekening.jpg
Omhoog
Plaats reactie
1 bericht • Pagina 1 van 1