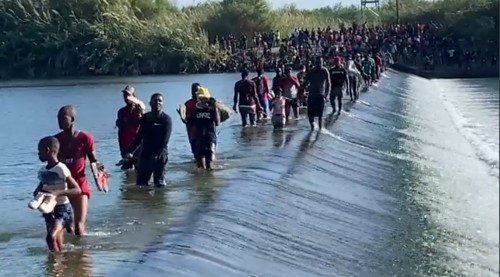 A Trump-appointed federal judge extended a temporary restraining order to prevent the Biden Regime from lifting Title 42, a Trump-era order blocking asylum seekers at the US border.

It is becoming more clear by the day that Trump-appointed judges are standing in defense of America and its sovereignty. And, Democrat judges are doing just the opposite.FOX News reported:

A federal judge on Wednesday extended a temporary restraining order that prevents the Biden administration from rolling back the use of the Title 42 public health order to expel migrants at the border, ahead of its May 23 end date and a hearing on a request for a preliminary injunction later this week.The Centers for Disease Control (CDC) announced last month that it would end the public health order, which has been used to expel a majority of migrants at the southern border since March 2020 due to the COVID-19 pandemic, at the end of May.

That immediately sparked concerns from both Republicans and Democrats that it would lead to not only more migrants being released into the U.S. interior, but that it would also encourage more migrants to come to the border. The Department of Homeland Security has acknowledged those concerns and said it is planning for a significant increase in migration and as many as 18,000 migrants a day.

In response, 21 Republican states, led by Arizona, Missouri and Louisiana filed a lawsuit, saying the lifting of the order was in violation of the Administrative Procedures Act and would negatively impact their states due to the migrant numbers that would follow.
images/ondertekening.jpg
Omhoog
Plaats reactie
1 bericht • Pagina 1 van 1