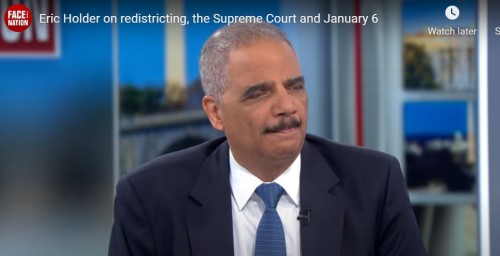 The wolves and snakes are in the hen house and they just won’t leave.

Obama’s first corrupt Attorney General, Eric Holder, was on (de) Face the Nation over the weekend. He indicated that he is involved in the efforts to prevent President Trump from running for office in 2024 after having his 2020 election stolen by gangsters like Holder.

The Conservative Treehouse shared the following about Holder’s interview on Sunday morning.

Holder gives the game away behind the J6 effort, a collaboration between a corrupt congress and a corrupt justice dept, when he states that Donald Trump should be indicted by Merrick Garland later this summer. “Given what we have learned, I think he has to be held accountable.”

What exactly has Holder ‘learned’ and how has he learned it?

We know that this wouldn’t be the first time Holder was engaged in lawfare against his political opponents and President Trump. When you see this you understand that Holder never should have been AG and should be just the opposite – indicted for abuse of power, not upholding the Constitution, and numerous other crimes.

Holder’s firm refused to turn over Holder’s emails when subpoenaed in the Flynn case where he was set up by former Holder associates in the corrupt DOJ.

Holder has a record of corruption so it’s not surprising that he would be involved in the Jan 6 sham like he was in the Russia collusion sham. People like Holder and his corrupt associates never should have been allowed in the Justice Department because it no longer resembles justice. These people are crooks arresting the good guys.
images/ondertekening.jpg
Omhoog
Plaats reactie
1 bericht • Pagina 1 van 1