Queen to miss Queen's speech today - but why? Buckingham Palace statement
THE QUEEN has had to pull out of reading the Queen's speech at today's State Opening of Parliament - here's why.
By KATIE ELLIOTT
Tue, May 10, 2022 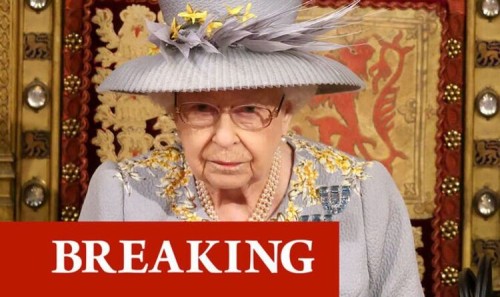 Queen Elizabeth II, 96, has been experiencing "episodic mobility problems" as of late, and has had to cancel a number of events this year. Prince Charles will be reading the Queen’s speech on her behalf instead.

A statement from Buckingham Palace reads: “The Queen continues to experience episodic mobility problems, and in consultation with her doctors has reluctantly decided that she will not attend the State Opening of Parliament.”

“At Her Majesty’s request, and with the agreement of the relevant authorities, the Prince of Wales will read the Queen’s speech on Her Majesty’s behalf, with the Duke of Cambridge also in attendance.”

The statement continues: “The Queen had to sign a new letter patent to allow Prince Charles to read her speech at the State Opening tomorrow. He is doing so as a Counsellor of State.

“Prince William is joining him as two Counsellor of State are required to perform any of the Queen’s constitutional duties."

This will be Prince William’s first time attending the State Opening of Parliament.

The State Opening of Parliament speech is believed to be the only constitutional duty the Queen is passing on to the Counsellor of States, as she's expected to continue with the rest of her other scheduled engagements at Windsor Castle this week.

This cancellation follows a number of missed events at Easter, including the Maundy Service, as well as an announcement that she would not be hosting royal garden parties this year.

Late Prince Philip's thanksgiving service has been the only public event outside of her royal residences that she's attended so far this year.

Episodic mobility problems, which means occasional or irregular moving problems, are not uncommon for those of the Queen's age.

But after catching Covid in February, advice to keep appearances to a minimum has increased, and most of the Queen's royal duties have been carried out virtually ever since.

The event usually begins with the Queen's procession, escorted by the Household Cavalry, from Buckingham Palace to Westminster.

After arriving at the sovereign's entrance and proceeding to the Robing Room, the Queen will take the throne in the House of Lords wearing the Imperial State Crown and the Robe of State.

The Queen then delivers her speech, which sets out the agenda of the Government and the new laws and policies it intends to introduce.

Although the Queen reads it, the speech is written by the Government.
The Queen has only missed reading the speech at the State Opening of Parliament twice during her 70-year reign.

The speech was delivered by the Lord Chancellor on these occasions, but as mentioned, Prince Charles will be stepping in for the Queen instead this year.

In recent years, the ceremony has seen a few adaptations, such as the Queen not wearing the heavy Imperial State Crown or Robe, however, this will be the first time in 59 years she will not have attended.
images/ondertekening.jpg
Omhoog
Plaats reactie
1 bericht • Pagina 1 van 1