A guided missile cruiser carrying a crew of 510, the Moskva was the flagship of Russia’s Black Sea Fleet. It sank on April 14 after being struck by two Ukrainian Neptune anti-ship missiles, U.S. officials said. Moscow said the vessel sank after a fire. The Moskva was the largest Russian warship sunk in combat since World War II. American officials said there were significant Russian casualties, but they don’t know how many.

The attack happened after Ukrainian forces asked the Americans about a ship sailing in the Black Sea south of Odesa, U.S. officials told NBC News. The U.S. identified it as the Moskva, officials said, and helped confirm its location, after which the Ukrainians targeted the ship.

The U.S. did not know in advance that Ukraine was going to target the Moskva, officials said, and was not involved in the decision to strike. Maritime intelligence is shared with Ukraine to help it defend against attack from Russian ships, officials added.

The U.S. role in the sinking has not been previously reported. But NBC News detailed last month how American intelligence shared with Ukraine had been instrumental in Ukraine’s successes to date, including in helping Ukraine target Russian forces and avoid Russian attacks. 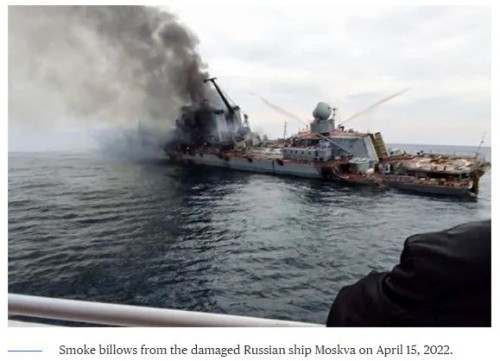 American officials have expressed concerns that reporting about U.S. intelligence sharing with Ukraine could anger Putin and provoke an unpredictable response.

The White House did not immediately provide a comment to NBC News.

In a statement released after this story was published, Pentagon press secretary John Kirby said the U.S. did not provide Ukraine with "specific targeting information for the Moskva."

"We were not involved in the Ukrainians’ decision to strike the ship or in the operation they carried out," Kirby added. "We had no prior knowledge of Ukraine’s intent to target the ship. The Ukrainians have their own intelligence capabilities to track and target Russian naval vessels, as they did in this case."
images/ondertekening.jpg
Omhoog
Plaats reactie
1 bericht • Pagina 1 van 1