Huge Groundwater System Discovered Under Antarctica
Geophysicists used remote sensing to see reservoirs beneath the surface. That water could speed up the loss of ice as the climate warms.
ByKevin Hurler 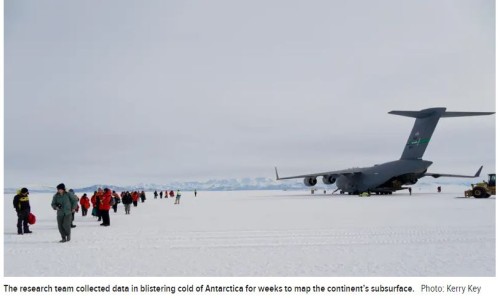 Antarctica, far from just a sprawling mass of ice, is a geologically complex continent made of expansive glaciers, jagged bedrock, and, as new research finds, large amounts of groundwater. A study published today in the journal Science describes a thick layer of groundwater underneath West Antarctica with the potential to govern the continent’s ice streams. The researchers behind the work think this could be one of several vast groundwater reservoirs under Antarctica.

The team, led by Chloe Gustafson, currently a postdoctoral researcher at the Scripps Institute of Oceanography, traveled to West Antarctica in late 2018. Before they began the remote field work—a risky expedition far from any backup—they spent two weeks preparing at McMurdo Station, a U.S. research outpost on Antarctica’s Ross Island. “At the peak of the season, there can be 1,000 people who are living there, so it’s like a small little town at times,” Gustafson told me by phone. “There’s a galley where everyone eats, there’s dorms, there’s a gym, there’s a couple bars.”

In addition to gathering all the tents, sleeping bags, food, and other supples they’d need, the team trained with a mountaineer on how to drive snow mobiles, dig shelters in the snow, and pitch tents. After waiting out some rough weather, the group of four—Gustafson, Kerry Key of Columbia University’s Lamont-Doherty Earth Observatory, Matthew Siegfried of the Colorado School of Mines, and mountaineer Meghan Seifert—took a flight to their field site: Whillans Ice Stream on the West Antarctic Ice Sheet.

An ice stream is a relatively fast-moving flow within an ice sheet. These things can move at rates as fast as 6 feet per day in Antarctica, and they account for 90% of the ice flowing off of the continent. They chose Whillans Ice Stream for their study due to the existing data that’s already been collected there. In 2007, Helen Fricker, another collaborator on this project, observed a subglacial lake system via satellite imaging. Over the next decade, researchers confirmed there was in fact a lake underneath the Whillans Ice Stream using seismology and drilling. “That was very interesting, and we wanted to take that to the next step and look at what is happening deeper down,” Gustafson said. “Is there groundwater?”

Most of the previous research on the Whillans Ice Stream was concerned with simply confirming the presence of liquid water under the ice via shallow drilling, but Gustafson and her team wanted to know what this subglacial groundwater actually looked like. Constrained by a short field season, they needed a more efficient method and settled on magnetotellurics, a passive geophysical method which Gustafson described as basically “doing an MRI of the Earth.” Magnetotellurics rely on the excitement of Earth’s ionosphere due to solar wind. That excitement generates electromagnetic waves—that Gustafson and her team recorded—which travel through Earth’s subsurface in different ways, depending on the medium.

“From those electric and magnetic field measurements, we can start to tease out okay, this is the signal that’s coming in from ice, this signal is coming from salty water, the signals coming from fresh water,” Gustafson explained.

The team had eight receivers that they would bury a foot down in the snow for 24 hours to collect those electromagnetic signals. Once a day passed, they would dig them up and move them a few kilometers away, repeating this process over and over for six weeks.

All this data added up to a key finding: The sediments beneath the Whillans Ice Stream were full of water. These are marine sediments that were deposited when Antarctica was once an open ocean millions of years ago. In their imaging, the team found that the sediments were anywhere from half a kilometer (about 1,600 feet) to 2 kilometers (over a mile) thick. They determined that, underneath a few-hundred-meter-thick layer of freshwater (caused by natural melting of the glaciers), there’s a water column that gets saltier the deeper it goes.

“Part of this salty groundwater could be remnant from when those sediments were initially deposited,” Gustafson proposed. “But then some of the salt in the groundwater could also come from times when the ice sheet grew, but then it retreated again, and ocean water came in.”

This was all hypothetical until now, and the researchers say they are the first to use magnetotellurics to actually image the subglacial groundwater.

“The scientific community has known for a while that there is a thick layer of marine sediments beneath much of the West Antarctica ice sheet, but we don’t know much about how the ice sheet is influenced by deep groundwater, which the new study shows is saline,” Poul Christoffersen wrote in an email. Christoffersen, who called the new paper “fascinating,” is a glaciologist at the Scott Polar Research Institute at the University of Cambridge and was unaffiliated with this project. He continued: “The new study also shows the freshwater produced by melting at the bottom of the ice sheet has penetrated several hundred meters into the groundwater system since the ice sheet formed, and that salt and solutes likely also flowed into the ice sheet’s basal drainage system.”

The groundwater beneath the ice stream could be playing a pivotal role in how the stream carries ice toward the sea. “I have this analogy: ice streams are like slip-and-slides,” Gustafson said. “So, if you have water on a slip-and-slide, you can slide pretty quickly. But if there’s less water or no water, you’re not going to slide very far.”

Brad Lipovsky of the University of Washington’s College of the Environment echoed Gustafson’s description. He told me in a phone call: “In the first few meters underneath the glacier, the properties there control how fast the ice flows in a direct way: [if] your glacier is sitting on top of a bunch of wet clay, it’s more slippery and the ice flows faster.”

These findings have potential implications for the rest of the continent. Gustafson said different pockets of subglacial groundwater could be found underneath ice streams all over Antarctica. “There are observations from surrounding Antarctica, that suggest that these sediments are present beneath [other] ice streams,” she said. “I would bet that these aquifers are common features throughout Antarctica.”While glaciers cover only 10% of Earth, the glaciers in Antarctica account for 85% of that coverage. Depending on how this groundwater behaves, it could help ice flow faster or slower into the ocean. The researchers suggest that when the system is stable, groundwater will drain into the Southern Ocean as more meltwater infiltrates the sediments. But if the ice streams were to lose mass under the rising temperatures of climate change, their reduced pressure on the sediments beneath them could allow more groundwater to rise to the surface, further lubricating the base of the stream and increasing its velocity, threatening the future of the continent’s ice cover.
images/ondertekening.jpg
Omhoog
Plaats reactie
1 bericht • Pagina 1 van 1