US Trade Deficit Surges to $109.8 Billion, First Time Ever It Topped $100 Billion in One Month

US Trade Deficit Surges to $109.8 Billion, First Time Ever It Topped $100 Billion in One Month

Another Biden Record: US Trade Deficit Surges to $109.8 Billion, First Time Ever It Topped $100 Billion in One Month
By Jim Hoft
Published May 4, 2022 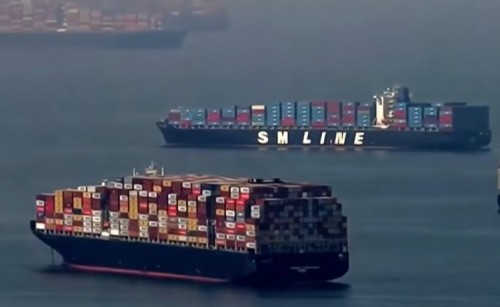 Another Biden record!
The US trade deficit surged to over $109 billion in March, the first time ever the trade deficit went over $100 billion

Newsmax reported:The U.S. trade deficit surged to a record high in March, confirming that trade weighed on the economy in the first quarter and could remain a drag for a while as businesses replenish inventories with imported goods.

The Commerce Department said Wednesday that the trade deficit accelerated 22.3% to $109.8 billion in March amid a record increase in imports. Economists polled by Reuters had forecast a $107 billion deficit.The government reported last week that a record trade deficit sliced 3.20 percentage points from gross domestic product in the first quarter, resulting in GDP contracting at a 1.4% annualized rate after growing at a robust 6.9% pace in the fourth quarter.
images/ondertekening.jpg
Omhoog
Plaats reactie
1 bericht • Pagina 1 van 1