Disney's head of corporate affairs quits after just THREE MONTHS because job was 'not the right fit' as firm's share price craters amid ongoing clash over Gov. Ron DeSantis' so-called 'Don't Say Gay' bill
Morrell's brief tenure has been marked by controversy over the company's response to Florida's law barring classroom instruction of sexual orientation
'It has become clear to me that for a number of reasons it is not the right fit,' Morrell wrote in an email to his staff
CEO Bob Chapek made the announcement in a separate email to employees
Kristina Schake will lead the company's communications efforts, Chapek said in the email
Schake previously was the head of President Biden's vaccine education program, as well as comms for Instagram and work in the Obama White House
Disney became the focus of criticism for initially failing to speak out publicly against the Florida legislation, which critics call the 'Don't Say Gay' bill
By STEPHEN M. LEPORE FOR DAILYMAIL.COM

Walt Disney's head of corporate affairs, Geoff Morrell, is leaving the company three months after joining as the entertainment giant battles an ongoing crisis over its opposition to a Florida sex education bull.

'It has become clear to me that for a number of reasons it is not the right fit,' Morrell wrote in an email to his staff. 'I have decided to leave the company to pursue other opportunities.'

CEO Bob Chapek made the announcement in a separate email to employees.

Kristina Schake will lead the company's communications efforts, Chapek said in the email.

Morrell's brief tenure came as the company was engulfed in a firestorm over its public opposition to Florida's Parental Rights in Education Bill - nicknamed the Don't Say Gay bill.

Disney was met with a furious backlash after coming out against the bill - which bans teaching of topics related to sexual orientation and gender identity in grades K-3.

It share price has since slumped by a third, with CEO Chapek also feeling the heat just two years after taking over from his well-respected predecessor Bob Iger. 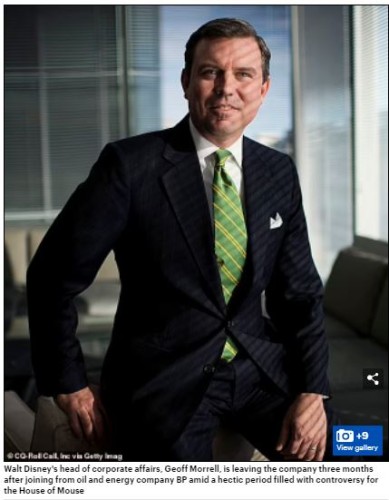 Schake previously was the head of President Joe Biden's vaccine education program, as well as communications for Instagram and work in the Obama administration.

Disney became the focus of criticism for initially failing to speak out publicly against the Florida legislation, which critics call the 'Don't Say Gay' bill.

The company said it worked behind the scenes to influence the legislation, an approach Chapek admitted had failed.

He later voiced disappointment with the measure and apologized to the company's LGBTQ employees for failing to be a 'stronger ally in the fight for equal rights.'

But the firm has angered both parents and conservative politicians, who've also accused Disney of hypocrisy for editing out LGBT scenes from its films in conservative markets. 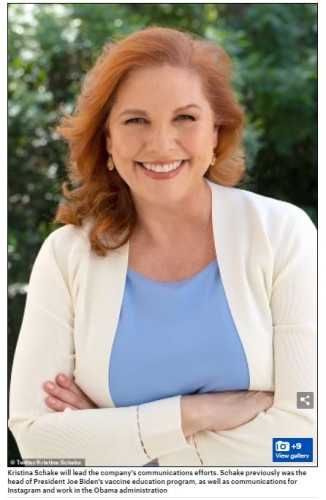 When Florida Governor Ron DeSantis signed the Parental Rights in Education bill into law on March 28, Disney issued a statement saying it 'should never have passed' and said that it should be repealed.

DeSantis was infuriated by Disney's remarks, alleging the California-based company was pushing its left-leaning views on the residents of Florida.

'You're a corporation based in Burbank, California, and you're gonna marshal your economic might to attack the parents of my state,' DeSantis said Friday after signing the bill. 'We view that as a provocation, and we're going to fight back against that.'

Disney's public condemnation opened a new front in the nation's culture wars, with DeSantis officially stripping Disney of its 55-year-old special privileges that effectively allowed it to self-govern.

DeSantis' toxic war with the firm started when it blasted the so-called 'Don't Say Gay' bill, whose official title is the Parental Rights in Education Bill, barring instruction on sexual orientation and gender identity in pre-school through to third grade. 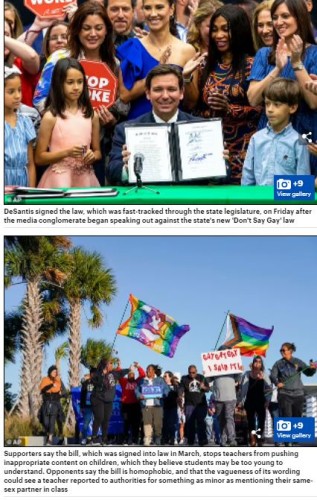 The company said in March it would suspend political donations in the state and added it would in turn support organizations working to oppose what is officially called the Parental Rights in Education bill.

But DeSantis and his fellow Republicans lashed out at the Orlando resort - defending the law - before moving to strip it of its special privileges.

Those see the body that runs Walt Disney World - the Reedy Creek Development District - effectively allowed to act as a local government.

Disney is likely to appeal the unwinding of the district, and even conservatives say the firm has a strong First Amendment case for doing so.

At the bill signing ceremony in South Florida earlier this month, DeSantis said Disney lied about the content of the education law but he viewed the company's vow to fight the law as unacceptable.

Supporters say the bill, which was signed into law in March, stops teachers from pushing inappropriate content on children, which they believe students may be too young to understand.

Opponents say the bill is homophobic, and that the vagueness of its wording could see a teacher reported to authorities for something as minor as mentioning their same-sex partner in class. 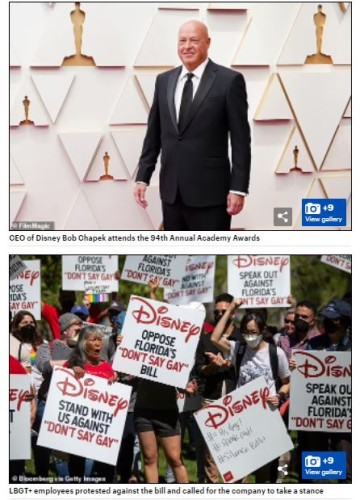 The company has yet to issue a statement on the new law, which would take effect on June 1, 2023.

Disney initially stayed quiet on the bill, but the firm - which has long had a good track record on supporting its LGBT staff - is said to have waded into the issue after being pressured by woke in-house diversity factions now said to exert growing influence over bosses there.

CEO Bob Chapek later spoke out after walkouts by a small number of Disney staffers - and angered DeSantis by openly suggesting that his firm would apply pressure on lawmakers.

After blasting the bill, he said: 'As I wrote to our employees earlier this week, we are committed to supporting community organizations like these so they are equipped to take on these fights.

'Meanwhile, we are also reassessing our approach to advocacy, including political giving in Florida and beyond.'

What is the Parental Rights in Education bill?
HB 1557 was introduced by two Republican members of the Florida Legislature - Representative Joe Harding and Senator Dennis Baxley.

They say the bill's aim is to 'empower parents' in their children's education, and make teachers recognize the distinction between 'instruction' and 'discussion.'

'What we're prohibiting is instructing them in a specific direction,' Baxley said about how teachers lead students in a classroom.

'Students can talk about whatever they want to bring up, but sometimes the right answer is, ''You really ought to talk to your parents about that.'''

The bill applies to children in kindergarten through third grade.

It states that 'classroom instruction by school personnel or third parties on sexual orientation or gender identity may not occur.'

It also requires districts to 'adopt procedures for notifying a student's parent if there is a change in the student's services or monitoring related to the student's mental, emotional, or physical health or well-being,' something LGBTQ advocates argue could lead to students being outed to their parents without the student's knowledge or consent.

It was passed on March 8 in a 22-17 vote. The state House had approved the bill late last month. DeSantis signed it into law on March 28 and it will come into effect on July 1.
images/ondertekening.jpg
Omhoog
Plaats reactie
1 bericht • Pagina 1 van 1