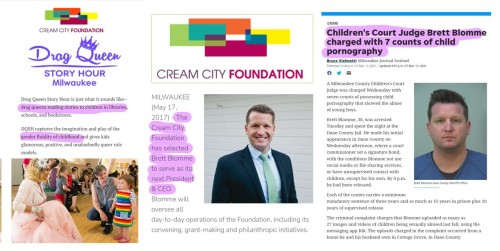 A Milwaukee County Children's Court judge was charged Wednesday with seven counts of possessing child pornography that showed the abuse of young boys.

Brett Blomme, 38, was arrested Tuesday and spent the night at the Dane County Jail. He made his initial appearance in Dane County on Wednesday afternoon, where a court commissioner set a signature bond, with the conditions Blomme not use social media or file sharing services, or have unsupervised contact with children, except for his own. By 4 p.m. he had been released.

Each of the counts carries a minimum mandatory sentence of three years and as much as 15 years in prison plus 10 years of supervised release.

The criminal complaint charges that Blomme uploaded as many as 27 images and videos of children being sexually abused last fall, using the messaging app Kik. The uploads charged in the complaint occurred from a home he and his husband own in Cottage Grove, in Dane County. 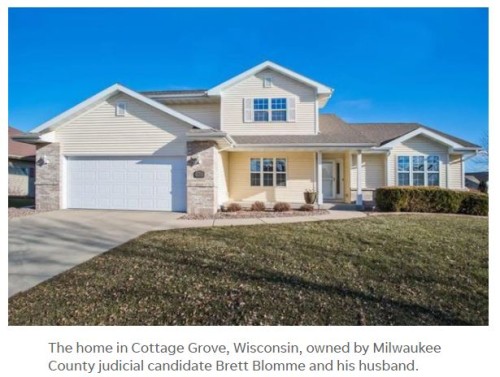 The couple has two adopted children. Court records do not suggest they are part of any of the illegal images. Child Protective Services is involved with their current placement, defense attorney Christopher Van Wagner said during the court hearing.

The case is being prosecuted by Assistant Attorney General David Maas. He argued for a $2,000 cash bail, that Blomme not be allowed to have a cellphone or any unsupervised computer use (except for with his attorney) and no unsupervised contact with any children, even his own.

But Court Commissioner Brian Asmus noted Blomme's extensive contacts with the area, his lack of any criminal record and his husband's interest in protecting the couple's children in deciding on lesser conditions or release.

A preliminary hearing was set for May 29.

Later Wednesday, the state Supreme Court announced it was suspending Blomme from any judicial duties, without pay, per the high courts "superintending and administrative authority" over all courts in the state.

According to the criminal complaint:

Investigators were tipped via the National Center for Missing and Exploited Children that a user called "DomMasterbb" had used the messaging and chat app known as Kik to send suspected child pornography.

State investigators, led by Special Agent Tamar Taubel of the Division of Criminal Investigations, later tied the account to Blomme via his personal and work emails, and searches were eventually done at the home in Cottage Grove, another in Milwaukee and at the judge's chambers.

The case marked at least the second time agents investigating child pornography executed a search warrant at Children's Court. In 2018, they seized the computer of a longtime staff attorney at Legal Aid Society of Milwaukee, which provides guardian ad litem services at the county. The lawyer, Michael Vruno, resigned but was never charged with a crime.

The complaint indicates Blomme also uploaded images using the internet at a friend's home in Milwaukee. That friend, referred to in a search warrant as Individual B, confirmed to investigators that Blomme was at his home on days that the friend's internet service showed uploads by DomMasterBB of child pornography.

Defeated an incumbent judge
Blomme was elected to the circuit court in 2020, defeating an incumbent who had been appointed by Gov. Scott Walker, Paul Dedinsky and a second challenger. He began service as a judge in Children's Court in Wauwatosa in August.

In 2019, Milwaukee Mayor Tom Barrett urged Democratic Gov. Tony Evers to select Blomme to an opening on the Milwaukee County Circuit Court, saying he had known Blomme for nearly 20 years.

"I have had the opportunity to watch Brett grow into a leader and a strong advocate for Milwaukee, a person of impeccable integrity and someone who has worked to make Milwaukee a more diverse and equitable place for all," Barrett wrote.

Evers did not appoint Blomme to the opening.

Before being elected judge, Blomme served as the president and CEO of Cream City Foundation, which supports the LGBTQ community. Previously, he had worked as an assistant public defender in Dane and other western counties.

Questions about his residency arose during the election. He said he was living in a house in Milwaukee, and that his husband — who works for the University of Wisconsin Health — and children lived in the couple's Cottage Grove home.
Though he had little if any legal experience in Milwaukee County, Blomme — the first openly gay person to run for judge in the county — rode the movement to diversify the circuit court to victory.

One of his opponents in the 2020 election, who strongly questioned Blomme's qualifications then, said he feels awful for Blomme's family and any victims.

"It appears that there have likely been many lives ruined by his actions. I also feel terrible for the children and families that have appeared in his court during the brief time he has been on the bench," said Zach Whitney.

"Words fail me here, but those children and families obviously deserve better -- as do the voters. He needs to immediately resign."

Messaging and chat apps, he said, have largely replaced peer-to-peer file sharing as the primary tool for spreading child pornography.

"It's so easy to communicate with like-minded individuals, almost out in the open, that they feel emboldened, and normalized," he said. "It presents a real risk to children."

Joy said that among his department and a couple of larger local law enforcement agencies, there are only a handful of investigators devoted full-time to internet crimes against children, but hundreds of other detectives have received training and help investigate crimes the task force finds in their jurisdictions.