China's plot to 'take over' Latin America: Beijing inks new deal to share nuclear tech, build 5G networks, develop space programmes, and pump cheap loans into America's back yard in 'growing threat' to US
China has put pen to paper on a new deal to deepen ties with countries in Latin America and the Caribbean
New deal will see Beijing share nuclear technology, build 5G and communications networks, help develop space programmes and pump cheap infrastructure loans into the region in attempt to buy influence
Comes off the back of years of Chinese investment and trade in the region, which has diminished US power
Beijing plans to 'take over' America's back yard and is a 'growing threat' to the US, analysts have warned
By CHRIS PLEASANCE FOR MAILONLINE

China has inked a new deal with leaders in Latin America and the Caribbean to deepen ties across almost all areas of society in what one analyst likened to a plot to 'take over' the region.

As part of the deal, Beijing has committed to supplying the region with 'civilian' nuclear technology, helping to develop 'peaceful' space programmes, building 5G networks of the kind Washington warns will be used to spy on people, and to pumping in cheap loans and financing for 'elaborate development plans.'

China has even pledged to build schools and fund classes teaching Chinese language and 'culture', though such institutions have been criticised elsewhere for pushing state propaganda and limiting academic freedom.

It comes off the back of decades of Chinese investment and development in Latin America and the Caribbean which has seen hundreds of billions of dollars poured into the region to build critical infrastructure such as ports, roads, and power plants in what many believe is an attempt to buy power and influence in America's back yard.

'There are absolutely ambitions for China to become the dominant influence in Latin America,' Mateo Haydar, a researcher at the Heritage Foundation said off the back of the latest deal. 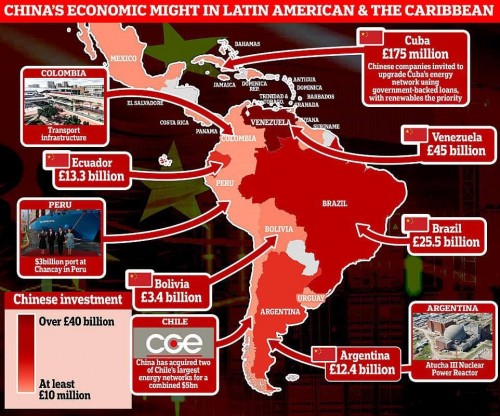 China has pumped cheap money into Latin America and the Caribbean for years, indebting governments and effectively buying influence. Where it has been unable to loan or buy, it has used armies of cheap workers to build key infrastructure projects, giving it outsized influence. And those ties are set to deepen with the signing of a new cooperation pact 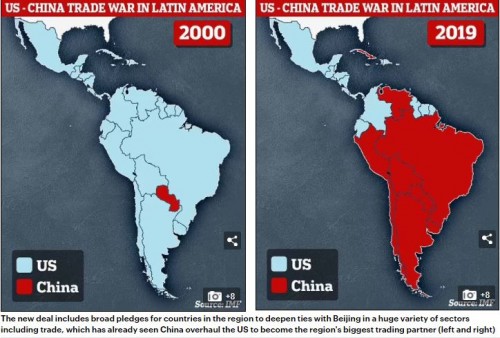 'The challenge is comprehensive, and there's absolutely a security and military interest there. ... That threat is growing, and it’s a different kind of threat than what we saw with the Soviets,' he told the Washington Examiner.

Professor Evan Ellis, of the U.S. Army War College, added: 'The Chinese don’t say, "We want to take over Latin America," but they clearly set out a multidimensional engagement strategy, which, if successful, would significantly expand their leverage and produce enormous intelligence concerns for the United States.'

The deal, officially the 'Joint Action Plan for Cooperation in Key Areas', was signed last month between China and CELAC, an alliance of Latin American and Caribbean States that encompasses almost all the countries in the region including major players such as Brazil, Argentina, Colombia, Venezuela, Uruguay and Chile.

While light on specifics, it sets out a broad roadmap for relations between China and countries in the region up to 2024 - committing them to deepening ties between governments, banks, companies and educational institutions.

Most of the commitments appear routine - such as pledges to preserve the environment, develop green tech, and promote equality and sustainability - but some will certainly give minds in the Pentagon pause for thought.

The deal specifies that this will be 'peaceful' and elsewhere commits the parties to pursuing 'nuclear disarmament', but will almost certainly cause concern because the technology used to enrich nuclear fuel can be repurposed to make weapons-grade material for use in bombs.

Washington has also been issuing increasingly frequent warnings about Chinese firms providing assistance to the military in recent months, and is likely to fear that any civilian nuclear firms which establish themselves in South America are being used for a dual purpose.

Likewise, China's pledge to help develop space programmes for the 'peaceful exploration of space' is also likely to be a cause for concern.

In the past, Beijing has tried to pass off the launch of spy satellites as 'communication' craft, and recently pushed back on accusations that it had tested a hypersonic orbital nuke by saying it was actually a civilian spacecraft meant for the 'peaceful exploration of space'.
images/ondertekening.jpg
Omhoog
Plaats reactie
1 bericht • Pagina 1 van 1