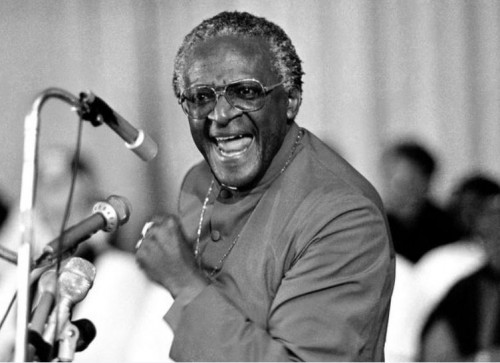 The Queen has joined world leaders in paying tribute to South Africa's Archbishop Desmond Tutu who has died at the age of 90.

In a statement Her Majesty said the whole Royal Family is "deeply saddened" by his death.

"I remember with fondness my meetings with him and his great warmth and humour," she said.

The anti-apartheid veteran was an outspoken critic of the country's previous brutal system of oppression against the country's Black majority.

Desmond Mpilo Tutu was awarded the Nobel Peace Prize in 1984 for his campaign of non-violent opposition to South Africa's white minority rule.

"The passing of Archbishop Emeritus Desmond Tutu is another chapter of bereavement in our nation's farewell to a generation of outstanding South Africans who have bequeathed us a liberated South Africa," President Cyril Ramaphosa said.

"From the pavements of resistance in South Africa to the pulpits of the world's great cathedrals and places of worship, and the prestigious setting of the Nobel Peace Prize ceremony, the Arch distinguished himself as a non-sectarian, inclusive champion of universal human rights."

Desmond Tutu: The South African icon who was loved far and beyond his native land

Mr Tutu was diagnosed with prostate cancer in the late 1990s and had been hospitalised several times in recent years to treat infections associated with his cancer treatment.

"Ultimately, at the age of 90, he died peacefully at the Oasis Frail Care Centre in Cape Town this morning," Dr Ramphela Mamphele, acting chairperson of the Archbishop Desmond Tutu IP Trust and coordinator of the Office of the Archbishop, said in a statement on behalf of the Tutu family.

Dr Mamphele did not give details on the cause of death.The statement described Mr Tutu as a man who "turned his own misfortune into a teaching opportunity to raise awareness and reduce the suffering of others".

It said: "He wanted the world to know that he had prostate cancer, and that the sooner it is detected the better the chance of managing it."
The statement added: "Courageous, gracious, and concerned for the welfare of others to the very end.

"As Mrs Tutu says, although he was not physically imposing, he had the inner strength of a lion."

A statement from the Nelson Mandela Foundation said the loss of the archbishop was "immeasurable".

It said: "He was larger than life, and for so many in South Africa and around the world his life has been a blessing.

"His contributions to struggles against injustice, locally and globally, are matched only by the depth of his thinking about the making of liberatory futures for human societies.

"He was an extraordinary human being. A thinker. A leader. A shepherd. Our thoughts are with his family and friends at this most difficult time."

Mr Tutu worked tirelessly for the downfall of apartheid in South Africa, using his pulpit as the first black bishop of Johannesburg and later Archbishop of Cape Town to rally public opinion against racial inequality.

He received the Nobel Peace Prize in 1984 for his human rights work and celebrated South Africa's first democratic elections in 1994, calling the country's multi-racial society a "rainbow nation".

Mr Tutu also campaigned for LGBT rights and same-sex marriage, saying in 2013: "I would not worship a God who is homophobic and that is how deeply I feel about this.

"I would refuse to go to a homophobic heaven. No, I would say, 'Sorry, I would much rather go to the other place.'"

Launching a campaign for LGBT rights in Cape Town, he said he was "as passionate about this campaign as I ever was about apartheid. For me, it is at the same level".

Tributes to 'prophet and priest'

US President Joe Biden and First Lady Jill Biden said they were "heartbroken" to discover Tutu had died.

They said in a statement: "We were blessed to spend time with him on several occasions over the past many years.

"His courage and moral clarity helped inspire our commitment to change American policy toward the repressive Apartheid regime in South Africa."

Prime Minister Boris Johnson also tweeted: "I am deeply saddened to hear of the death of Archbishop Desmond Tutu.

"He was a critical figure in the fight against apartheid and in the struggle to create a new South Africa - and will be remembered for his spiritual leadership and irrepressible good humour."

Archbishop Desmond Tutu was a mentor, a friend, and a moral compass for me and so many others. A universal spirit, Archbishop Tutu was grounded in the struggle for liberation and justice in his own country, but also concerned with injustice everywhere. pic.twitter.com/qiiwtw8a5B

— Barack Obama (@BarackObama) December 26, 2021
Former US president Barack Obama tweeted: "Archbishop Desmond Tutu was a mentor, a friend, and a moral compass for me and so many others. A universal spirit, Archbishop Tutu was grounded in the struggle for liberation and justice in his own country, but also concerned with injustice everywhere.

"He never lost his impish sense of humor and willingness to find humanity in his adversaries, and Michelle and I will miss him dearly."

Another former US president, Bill Clinton, said: "Archbishop Desmond Tutu's life was a gift. Blessed with brilliance and eloquence, steady determination and good humor, and an unshakeable faith in the inherent decency of all people.

"His own heart was good enough to seek reconciliation not revenge, to reject demonisation and embrace his uncanny ability to bring out the best in others. Those of us touched by the gift of his life owe it to him to pass it on.

"Hillary and I send our prayers to Leah, his family, and all those who stood with him."

Archbishop Desmond Tutu was a prophet and priest, a man of words and action – one who embodied the hope and joy that were the foundations of his life. Even in our profound sorrow we give thanks for a life so well lived. May he rest in peace and rise in glory. https://t.co/JlsEVjtM9G

— Archbishop of Canterbury (@JustinWelby) December 26, 2021
And former UK Prime Minister Tony Blair said: "His spiritual leadership and willingness to take action in pursuit of peaceful change earned him the respect of millions in South Africa and the rest of the world."

Archbishop of Canterbury Justin Welby tweeted: "Archbishop Desmond Tutu was a prophet and priest, a man of words and action - one who embodied the hope and joy that were the foundations of his life.

"Even in our profound sorrow we give thanks for a life so well lived. May he rest in peace and rise in glory."

Other religious figures offered their tributes, with the Dalai Lama calling Tutu a "true humanitarian and a committed advocate of human rights".

A telegram released on behalf of Pope Francis said that: "Mindful of his service to the Gospel through the promotion of racial equality and reconciliation in his native South Africa, His Holiness commends his soul to the loving mercy of Almighty God."

Basim Naeem, a senior official within the Palestinian Islamist militant group Hamas, told Reuters: "Our Palestinian people lost a strong supporter of their march towards freedom and independence.

"Father Desmond Tutu spent his entire life struggling against racism and defending human rights and especially on the Palestinian land."

South African Strictly Come Dancing stars Oti and Motsi Mabuse also paid tribute to the archbishop, with dancer Oti tweeting, "Oh no sad news" and saying it was a "major loss" for the country.

Strictly judge Motsi shared a quote on Twitter which said: "Forgiving is not forgetting; its actually remembering-remembering and not using your right to hit back.

"It's a second chance for a new beginning. And the remembering part is particularly important. Especially if you don't want to repeat what happened. R.I.P Desmond Tutu." 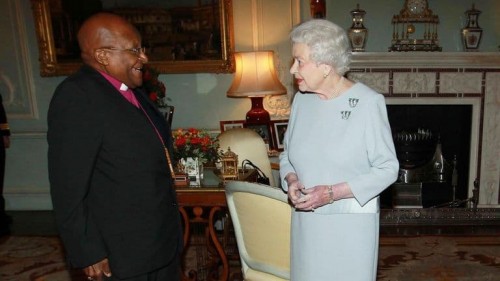