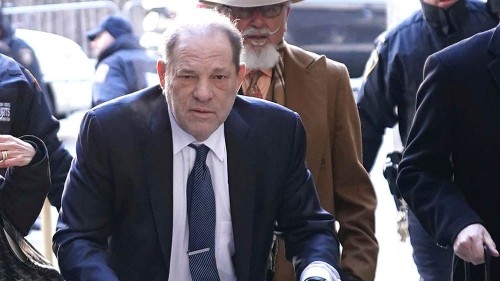 Several appellate justices said Wednesday that they worried that Harvey Weinstein had been subjected to “overkill” at his criminal trial in New York last year.

Weinstein, the disgraced Hollywood producer, is appealing his conviction on charges of sexual assault and third degree rape, which resulted in a sentence of 23 years in prison.

At a hearing before the Appellate Division, First Judicial Department, on Wednesday, three of the five justices expressed serious concerns that Justice James Burke had erred by allowing prejudicial evidence at trial that could impugn Weinstein’s character.

The defense has argued that Burke should not have allowed three women — Dawn Dunning, Tarale Wulff and Lauren Young — to testify at the trial. Each of them alleged that Weinstein had sexually assaulted them after they had visited him for a business meeting. The women’s testimony — called Molineux evidence in New York — was used to show a pattern of sexual misconduct in support of the allegations for which Weinstein was on trial.

Burke also allowed so-called Sandoval evidence, which can be used to rebut a defendant’s testimony at trial. Weinstein did not testify in his own defense. His appellate attorney, Barry Kamins, argued that was partly because Burke had granted the prosecution’s request to bring up as many as 28 other incidents to attack Weinstein’s credibility.

Justice Angela Mazzarelli noted that one of those incidents involved Weinstein throwing a table full of food at an employee in the late 1980s, and questioned why that was permitted.

Two justices suggested that Burke’s ruling on the Sandoval motion lacked “balance.” Manzanet-Daniels said that some evidence might have been appropriate, but that Burke had perhaps gone too far.

“Let’s inflame the jury’s heart by telling them that he beat up his brother during a meeting,” she said. “I don’t see how there’s a balance there on that.”

Manzanet-Daniels challenged the relevance of another incident that Burke allowed prosecutors to use to rebut Weinstein’s testimony.

“What did leaving his employee on the side of the road in a foreign country have anything to do with this sex crime case?” she asked. “Other than, ‘Let’s put in as much as we can to show that guy is a terrible guy.'”

Justice Judith Gische noted that jury’s verdict should be based on the charges, and “not based on the fact that this is just a horrible person.” She, too, suggested that the number of acts allowed in the Sandoval ruling may have been excessive.

“The fact that there were so many is only indicative of how the defendant lived his life,” Figueredo responded. “The court was not required to unduly sanitize that.”

Gische shot back: “You’re saying, ‘This is just him. He’s a bad guy. There’s a lot of acts because he’s just bad.’ To say it’s indicative of how he led his life — he doesn’t get convinced because he’s a bad guy. He gets convicted for these particular crimes. So that argument — I have to admit, it’s rubbing me the wrong way.”

Manzanet-Daniels asked why the three women whose allegations were charged — Jessica Mann, Miriam Haley and Annabella Sciorra — were not enough. She worried that the Molineux witnesses were used to demonstrate a “propensity” to commit crimes, rather than a signature pattern. She added that judges typically bar prosecutors from going deep into a defendant’s rap sheet.

“To pile on with three uncharged complainants is leaning really close to that propensity line,” she said.

Two other justices — Cynthia Kern and Ellen Gesmer — mostly refrained from asking questions, though Gesmer did ask the district attorney to cite a precedent supporting the Molineux ruling.

Kamins also argued that Juror 11 at the trial should have been excused because she misrepresented the subject of a novel she had written. The justices seemed far less interested in that issue.

The justices will likely take at least several weeks, and perhaps a few months, to issue an opinion. They could overturn Weinstein’s conviction, leaving the Manhattan D.A.’s office to decide whether to try him again.

Weinstein is currently housed at the Twin Towers Correctional Facility in Los Angeles, where he is awaiting trial on 11 other charges. That trial is not expected to begin before next summer.
images/ondertekening.jpg
Omhoog
Plaats reactie
1 bericht • Pagina 1 van 1