Dan Andrews goes on leave after being ordered to front court for 'concealing treason and fraud' - as premier hopes the case just goes away
Daniel Andrews is accused of 'concealing an overt act of treason'
The matter has been listed with the Myrtleford Magistrates Court on Friday
Mr Andrews is charged with, but not limited to, concealing treason and fraud
The hearing will take place over video link due to ongoing Covid-19 concerns
Mr Andrews has refused to comment on the pending court hearing
He is currently on leave after spending a hard year imposing Covid lockdowns
By WAYNE FLOWER, MELBOURNE CORRESPONDENT

Victorian Premier Daniel Andrews has quietly ducked out of Melbourne after being summonsed to appear at court on charges of 'concealing treason'.

The charge was successfully filed with the Myrtleford Magistrates' Court and Mr Andrews - or at least his legal representative - is listed to face the court on Friday at 9.30am.

The revelations of the court hearing are likely to have at the very least annoyed the holidaying premier, whose spin doctors were contacted for comment by various media organisations on Tuesday. 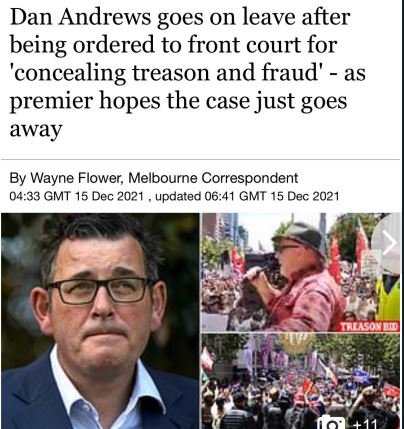 Insiders told Daily Mail Australia Mr Andrews had simply fobbed off the pesky litigation, which comes amid several more pressing legal matters for the Andrews Government to worry about.

'I think the more interesting cases will be Ken Phillips and WorkSafe/HQ proceedings and then the SlugGate (ICook foods) court proceedings against (Professor Brett) Sutton and the health department,' a source said.

The matters refer to WorkSafe's investigation into Mr Andrews' disastrous hotel quarantine facilities, which contributed to the deaths of more than 800 Victorians, and the health department's closure of a catering company after a slug was planted by dodgy council staff.

It remains unclear where Mr Andrews has gone for his end-of-year break.

The last time the Victorian Premier got away he ended up with a broken back, which put him off work for months.

On Friday, a legal representative acting on his behalf is expected to tune into the court hearing via videolink due to ongoing Covid-19 concerns within Victoria's justice system.

Sources have told Daily Mail Australia the private prosecution had been rejected from several Victorian courts before finally being put into the criminal justice stream in Myrtleford - 280 km northeast of Melbourne.

The listing of the charges has been celebrated by anti-vaxxers and lockdown protesters, with many taking to social media to wallow in anticipation of the words 'treason' and 'Daniel Andrews' being used together inside an actual courtroom. Addressing 'freedom' protesters last month, Mr Rech claimed to have been successful in having the matter brought before the court.

Mr Rech, who refers to himself as a 'Commonwealth Public Official' is known to have tried similar proceedings against other members of parliament across the country, reportedly arresting 'those sitting on the bench without any Crown authority'.

'He was charged with, but not limited to, misprision of treason and fraud. And as a result of those charges being filed and served, they were served at his electoral office,' Mr Rach told protesters.

'The police have been given notice … The courts have been told to suppress the listing but we put it out there, we’ve been to the court registrars.'

Mr Rech told the mob the Victorian premier faced the 'death penalty' if convicted of treason.

'Now that means any politician on indictable criminal offences which is a life penalty but under martial law it’s a death sentence – it has to go to a grand jury,' he said.

Under the law in Victoria, ordinary citizens can pay $85.70 and file a criminal charge in court.

While many private prosecutions are described by legal professionals as 'wacky', they have a long history in Victoria. 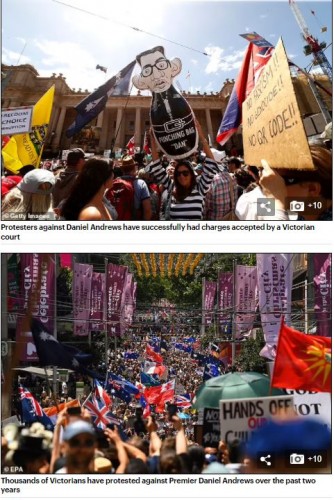