The Socialist Democrats Won’t Leave Roger Stone Alone – Here’s His Response to the Subpoena from the Jan 6 Committee
By Joe Hoft
Published November 23, 2021 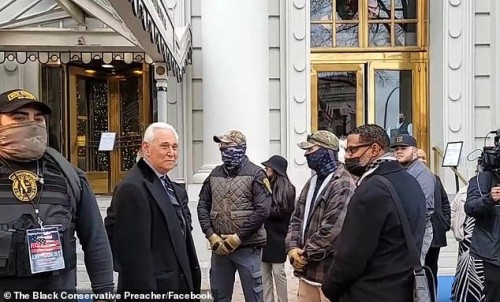 Roger Stone was in Washington DC on January 6th but never went near the Capitol. This doesn’t matter to today’s monsters running the US House of Representatives.
Yesterday we learned that in spite of the FBI’s investigation into Roger Stone’s actions at the Capitol on January 6th, the Committee in the US House with that name has subpoenaed Mr. Stone.

We know that Roger Stone was present at his hotel on January 6th before leaving town. We also know that the Secret Service attempted to set up Mr. Stone at the Capitol that day.

Here is a portion of the letter to Roger Stone: 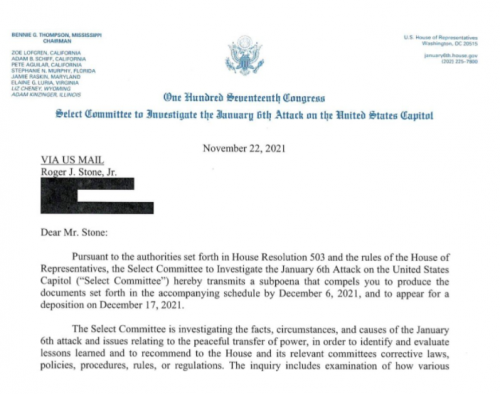 Here is a message from Mr. Stone who is under attack.

Needless to say, the subpoena above was released to the media to create a fake news media feeding frenzy long before it was received or even seen by my lawyer!

Haven’t my wife and I suffered enough at the hands of liars and con-men like Adam Schiff, Jerry Nadler and Chinese spy-compromised Eric Swallwell? I was not at the Ellipse or the Capitol on January 6th and know nothing about any illegal activity on that day. Any political activity I engaged in was legal and Constitutionally protected by free speech rights and right to free assembly.

Between the two years of hell we were put through, being framed and extorted to bear false witness against President Trump in the Mueller witch hunt – and being censored, deplatformed and canceled on the internet, we are battered, exhausted and essentially bankrupted. Only by the grace of God and the intercession of Jesus Christ was I pardoned and delivered from my persecutors when pardoned by President Trump.

Now I have to go out and retain lawyers to fight this latest vile attack on me and my family. I just can’t do it alone. I will never stop fighting but I need your immediate help once again. The coffers at the Stone Defense Fund are virtually empty, having been through a two year ordeal and more recently won dismissal of 11 harassment civil law-suits against us!

Please send an EMERGENCY contribution to my legal defense fund so I can stand up to these bullies who seek to smear, frame and destroy me once again.

I will fight, and by the Grace of God, will win again- but I cannot do it without your help.

If you are more comfortable mailing a check than utilizing a credit card or PayPal to make a contribution to the StoneDefenseFund.com please make your check payable to “Stone Defense Fund” and mail it to 1007 N Federal Highway #405, Fort Lauderdale, FL 33304. God Bless You.
images/ondertekening.jpg
Omhoog
Plaats reactie
1 bericht • Pagina 1 van 1