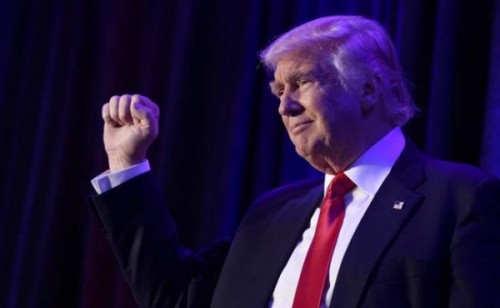 “Congratulations to Tim Ramthun, State Representative of Wisconsin, for putting forward a powerful and very popular, because it’s true, resolution to decertify the 2020 Presidential election based on the recently found absolute proof of large scale voter fraud that took place,” the 45th president wrote. 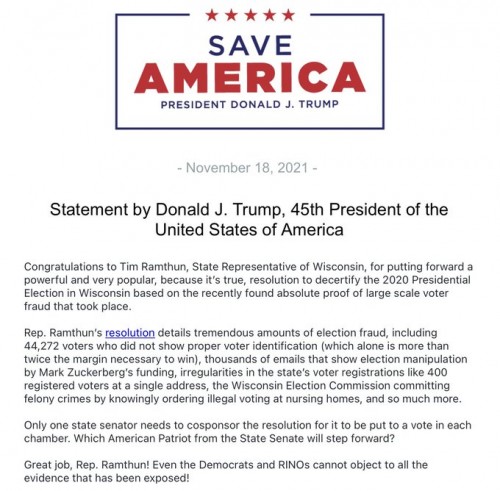 Ramthun’s resolution calls for a “full forensic physical and cyber audit” to be conducted in Wisconsin based on evidence of “widespread voter fraud” in the 2020 election. Wisconsin Republicans claim the bipartisan Legislative Audit Bureau report found 44,272 voters did not have proper voter identification.

The audit report was not the only piece of evidence that prompted Ramthun’s resolution to decertify the election. The state representative claims that the Wisconsin Election Commission intentionally directed all 72 county clerks to violate state statutes in the 2020 election.

The audit’s findings, in combination with the violation of Wisconsin state statutes, could be enough to convince other representatives to support a full audit of the election and perhaps the decertification of the 2020 presidential election.

In late October, the Wisconsin election audit of the state’s voting machines concluded the 2020 Presidential election was “secure.” However, Republicans have documented evidence to contradict this claim, leading many to once again question the legitimacy of Wisconsin’s 2020 election.

Ramthun explained, “I have continued to pursue truth and integrity of our 2020 general election. Recent developments have made it abundantly clear that the legislature should not have certified Wisconsin’s ten electoral ballots on December 14th 2020.”

In December 2020, Wisconsin’s legislature certified the 2020 election despite concerns of “widespread voter fraud.” Biden won Wisconsin by a little over 20,000 votes in the 2020 presidential election. If the irregularities reportedly found in Wisconsin’s election are confirmed, Biden’s margin of victory could be completely erased in Wisconsin.

In recent weeks, renewed calls for additional election audits and the decertification of the 2020 election have been echoed across multiple states. Ramthun’s resolution is seen by many as a necessary “duty” of elected representatives, given the abundant evidence being presented.

“I call upon the Wisconsin Legislature to recognize its duty under Article 2 Section 1 Clause 2 of the United States Constitution, as well as the guidance provided from ss6.84(1), to decertify Wisconsin’s November 2020 election results by reclaiming its ten electoral ballots,” said the Wisconsin lawmaker.

Ramthun’s statement concluded with a directive for Wisconsin’s other representatives. He urged his fellow representatives, saying, “It falls upon us to take this historic action and answer the call for this injustice. It’s beyond time to work of, by, and for the people of Wisconsin.”

Additionally, President Donald Trump called upon other members of the Wisconsin state Senate to cosponsor the resolution so it can be brought before the legislature for a vote.

Trump warned American citizens that the 2020 election would be a massive case of “voter fraud.” In the aftermath of the election, numerous states have conducted election audits and found tens of thousands of cases of voting irregularities and potential voter fraud in the 2020 election. The 45th president has continued to urge the states to decertify the election, with more details emerging as a result of election audits.

Ramthun’s resolution is a bold step forward in confronting “voter fraud” and election irregularities, however his resolution will require the support of other representatives if Wisconsin’s ten electoral ballots are to be overturned.
images/ondertekening.jpg
Omhoog
Plaats reactie
1 bericht • Pagina 1 van 1