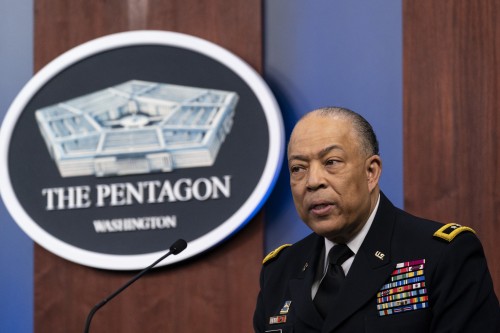 Army Maj. Gen. William Walker, the former commanding general of the D.C. National Guard, speaks during a media briefing at the Pentagon on Jan. 25. (Alex Brandon/AP)
By Dan Lamothe and Paul Sonne
Today at 6:12 p.m. EST|Updated today at 8:58 p.m. EST


The D.C. National Guard’s commanding general was directed twice by Pentagon leadership to send in troops as violence engulfed the U.S. Capitol on Jan. 6, according to a newly released investigation that appears to undercut the now-retired general’s claim that he would have responded to the riot more quickly if Trump administration officials had allowed.

Army Secretary Ryan McCarthy first notified Maj. Gen. William Walker by phone at 4:35 p.m. that Walker was authorized to send troops to Capitol Hill, and then called the general again “to reissue the deployment order” about 30 minutes after McCarthy “originally conveyed it,” an unidentified Army witness told investigators with the independent Defense Department Inspector General, according to a newly released report. A timeline of events that day, assembled by the inspector general’s office, also indicates separate calls were made.

The investigation’s findings bring new scrutiny to Walker, who earlier this year was lauded for his candor in publicly recounting how dysfunction at the Pentagon stalled the National Guard’s response as supporters of President Donald Trump brutalized police and panicked lawmakers pleaded for help. Speaking at a joint Senate hearing on March 3, Walker recalled having a quick reaction force (QRF) geared up and said he was frustrated by the speed at which senior defense officials were responding. He told senators it was 5:08 p.m. when he received approval to deploy. The Capitol was breached at 1:50 p.m.

Three weeks after the Senate hearing, House Speaker Nancy Pelosi (D-Calif.) appointed him House sergeant-at-arms, saying Walker was a “leader of great integrity” and that he would be “an important asset to the House, particularly in light of the January 6 insurrection.”

Walker, in a phone interview late Wednesday, said he was shocked the inspector general’s office released what he characterized as inaccurate, uncorroborated statements by anonymous Army officials. He said he tried to send personnel to the Capitol hours earlier and was ready to go when was first notified.

“These were exigent circumstances. Rome was burning,” Walker said. “I came danger-close to just saying, ‘Hey, we’re going,’ and then resign. But prudent people talked me out of that decision. It probably wouldn’t have been the right one.”

Walker said he was not allowed to respond to the anonymous statements before the report, calling the inspector general’s work sloppy and illustrative that he is up against “the most powerful Army in the world.”

“And I believe in that Army,” he added. “But that Army failed on January 6th.”

It’s unclear why Walker was never asked for a response to the claims he was told twice to dispatch his forces. A spokeswoman for the inspector general’s office, Megan Reed, said that as a matter of practice, she could not comment on the office’s oversight processes. The investigation concluded that, overall, the Pentagon’s response was “reasonable in light of the circumstances.”

Before. During. After. A Washington Post investigation of the Jan. 6 siege on the U.S. Capitol

Walker told Congress in his testimony that memorandums issued by McCarthy and Trump’s acting defense secretary, Christopher C. Miller, restricted his ability to quickly dispatch the National Guard, but Army officials interviewed by the inspector general said Walker was aware of those decisions ahead of time and did not voice objection.“The discussion of QRF implementation beforehand was very clear and General Walker understood it and he knew exactly what needed to happen if the QRF needed to be employed and he had no questions or concerns at that time,” said one member of the Army staff, according to the report.

The discrepancy in timelines has come up before. Days after the assault, the Pentagon released an account of events that said Miller provided verbal authorization at 4:32 p.m. to “re-mission” the National Guard in support of Capitol Police and that Guardsmen began departing from the D.C. Armory precisely 30 minutes later. A National Guard timeline released in January did not mention a call at 4:32 p.m. 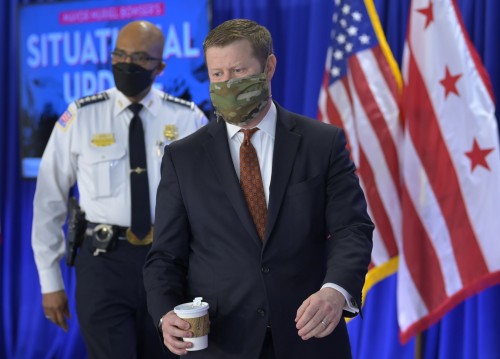 Mirroring his Senate testimony, Walker told the inspector general’s investigators that he was “stunned” and “frustrated” during a 2:22 p.m. conference call, when city officials asked for National Guard assistance and senior Army officers — Lt. Gens. Charles Flynn and Walter Piatt — advised against providing it.
Other witnesses interviewed as part of the investigation said that Piatt was concerned about public blowback over the sight of uniformed military personnel potentially confronting political protesters, but that the Army had not ruled out helping and needed a plan before inserting soldiers into the crisis.

Walker, when asked by Piatt and Flynn for an operational plan, told the generals that he wanted to get his personnel onto buses and en route to the Capitol while taking direction from police officials, he told investigators. Piatt wanted more specifics.

“It would be like me saying, ‘Go to Baghdad and just find somebody and see what they need,’ ” Piatt said in his interview with investigators.

Flynn’s involvement became controversial because his brother is retired Lt. Gen. Michael Flynn, a former Trump adviser who called for the military to participate in re-running the 2020 election. Army officials falsely asserted for days that Charles Flynn was not at the meeting, before Flynn confirmed that he was briefly involved in a statement to The Washington Post. The inspector general report affirms as much, saying other Army witnesses told investigators that Flynn’s involvement was “minimal.”Piatt told inspector general investigators that he was unable to calm other officials, saying someone on the conference call warned that they would tell the media that the Army had denied the Capitol Police request for help. Another Army witness said Bowser made that statement. An official close to Bowser said Wednesday that the mayor did not speak during the call. It is not clear who else may have issued the warning.

A short time later, Army officials told investigators that claim leaked to the media anonymously, and McCarthy and his staff took time to respond to inquiries from journalists and members of Congress during the crisis.

An unidentified Army witness told inspector general investigators that McCarthy went to D.C. Metropolitan Police headquarters after the conference call, at about 3:48 p.m., in part because Walker “could not clearly articulate to his staff” specifically what police needed.

“Mr. McCarthy, Mayor Bowser, Chief Contee, and others present drafted a plan that identified where the [D.C. National Guard] personnel would go, the route they would take, with whom they would connect when they arrived, what they would do when they got there, whom they would support, who was in charge, and who the key leaders were,” the report said.

The report made several recommendations for improvement, including ensuring that all D.C. National Guard members have functioning communications equipment issued by the Defense Department, formulating a plan for how the Pentagon and D.C. Guard might respond to any future major disturbance in the D.C. area, and establishing criteria and training for personnel who could be tasked with responding.

Pentagon spokesman John Kirby said in a statement that the Defense Department “takes seriously all reports of the Department’s independent Inspector General,” and is reviewing findings and recommendations in the report.

“We are grateful for their work,” he said.
images/ondertekening.jpg
Omhoog
Plaats reactie
1 bericht • Pagina 1 van 1