Another January 6th Commission member is compromised by the CCP.

Another January 6th Commission member is compromised by the CCP.

Rep. Elaine Luria – a member of the Congressional January 6th Commission – has six-figure investments in a Chinese Communist Party-linked tech firm flagged by the U.S. State Department for aiding the regime’s military and espionage capabilities, The National Pulse can reveal.

The Virginia Congresswoman‘s most recent financial disclosure reveals an investment worth $250,000 to $500,000 in Alibaba, a Chinese e-commerce giant whose executives include powerful members of the Chinese Communist Party. 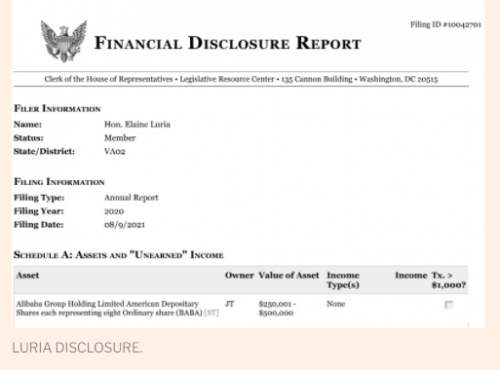 Alibaba has also been involved in the “research, production, and repair of weapons and equipment for the People’s Liberation Army (PLA)” and has a “deep record of cooperation and collaboration” with China’s “state security bureaucracy,” former Assistant Secretary for International Security and Nonproliferation Christopher Ford revealed.

The State Department has also flagged the company as a “tool” of the Chinese Communist Party, aiding in its build-up of “technology-facilitated surveillance and social control.”

Significantly, the modern “China Model” is built upon a foundation of technology-facilitated surveillance and social control. These techniques for ruling China have been – and continue to be – in critical ways developed, built, and maintained on behalf of the Party-State by technology firms such as Huawei, Tencent, ZTE, Alibaba, and Baidu. As these companies export their products and services to the rest of the world, the security and human rights problems associated with this “China Model” are progressively exported with them.

Companies including Alibaba “have no meaningful ability to tell the Chinese Communist Party “no” if officials decide to ask for their assistance – e.g., in the form of access to foreign technologies, access to foreign networks, useful information about foreign commercial counterparties, insight into patterns of foreign commerce, or specific information about the profiles, activity, or locations of foreign users of Chinese-hosted or -facilitated social media, computer or smartphone applications, or telecommunications,” the report adds.Yesterday, The National Pulse revealed how Rep. Adam Schiff, another Jan 6th commission member met with a Chinese Communist Party official previously responsible for spearheading the regime’s foreign influence operations on a visit to Washington, D.C. sponsored by the China-United States Exchange Foundation.