Is Nostradamus Prophecy Related To CERN?

Is Nostradamus Prophecy Related To CERN?

“Leave, leave Geneva every last one of you, Saturn will be converted from gold to iron, RAYPOZ will exterminate all who oppose him, Before the coming the sky will show signs…” (Nostradamus 9 44).

Can this Nostradamus prophecy be related to CERN and its machine and what is really going on at CERN?

Are scientists playing around with dangerous forces that they simply do not understand?

Not much information is coming from underground, unfortunately.

Large Hadron Collider (LHC) is one of the most gigantic and at the same time, controversial $10 billion machine, which unfortunately gives us the creeps. It’s located at 100 meters deep underground, in the 27 kilometers long, giant, circular tunnel with several loops, under the land between France and Switzerland.

It’s worth to know that LHC is a machine where both extremely hot and extremely cold temperatures meet. Comparing some important facts, we can try to imagine easier what is going down there. The coldest temperature ever recorded at the South Pole was -117 degrees, and the coldest on Earth was recorded at the Vostok Antarctic Station, -128 degrees!

One can say that South Pole, is one of the coldest places on our planet.

The complex itself is very dangeous and so are the bizarre experiments conducted by researchers down there. 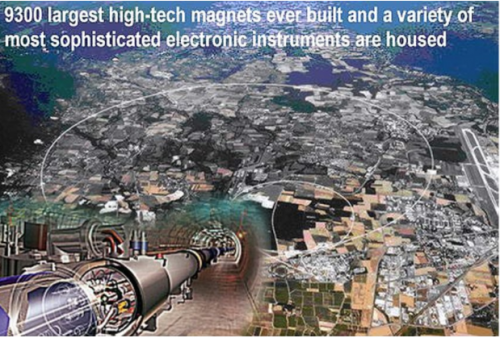 At the beginning there were many failures: The European Organization for Nuclear Research (also known as CERN) is purposely smashing particles into one another at astonishingly high speeds.

A few researchers have suggested that the experiments could either open a black hole, destroy the entire world or open up a portal to another dimension.

On the other hand, many scientists from all over the world are working in this greatest underground laboratory, where LHC is located. They study and try to understand the mystery of the universe via data delivered by the collider.

They want to know: “Why do particles have mass?”; “What is the nature of dark matter in the universe?”, and “What was the state of matter just after the Big Bang?”

According to recent press release:

“As for any machine exploring a new energy frontier, operators at the LHC face many challenges on a daily basis. Since the start of Run 2, they have been gradually increasing the intensity of the LHC’s two beams, which travel in opposite directions around the 27-kilometre ring at almost the speed of light. The LHC has run at the record high energy with each beam containing up to 476 bunches of 100 billion protons, delivering collisions every 50 nanoseconds. In the coming days, the intensity should increase further with a new rhythm of 25 nanoseconds. After a planned technical stop in early September, the teams will also be able to increase the number of bunches with the goal of reaching more than 2000 bunches per beam by the end of 2015.

“During the hardware-commissioning phase, we have learnt to manage carefully the huge energy stored in the magnets. Now with beam commissioning we have to learn progressively how to store and handle the beam energy,” said CERN Director of Accelerators and Technology Frédérick Bordry. “Our goal for 2015 is to reach the nominal performance of the LHC at 13 TeV so as to exploit its potential from 2016 to 2018.” 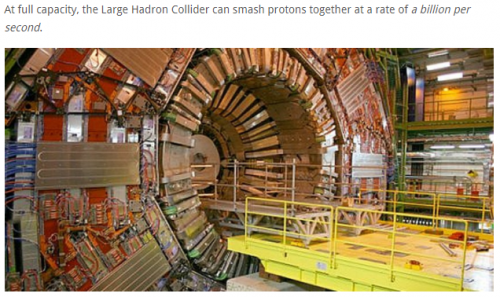 According to Stephen Hawking, the LHC may be ‘capable of creating a black hole that could swallow our world and destroy the entire universe’

So precisely what are researchers hoping to accomplish by this?

Do we really known what’s going on at CERN or is it a secret mission?
images/ondertekening.jpg
Omhoog
Plaats reactie
1 bericht • Pagina 1 van 1