NEWS
‘God’s Hand is With Us’: Illegal Migrant Caravan Leaders Are Issuing Violent Threats to U.S. Border Security.
...and, of course, the Biden regime is nowhere to be seen.by Kay Smythe
November 3, 2021 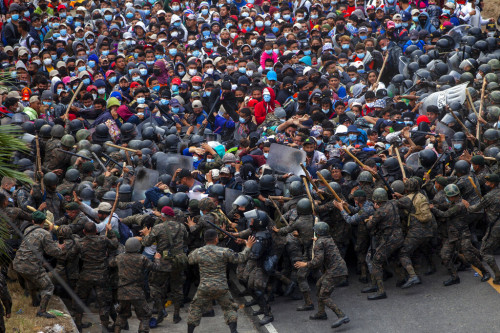 This year’s largest caravan of illegal migrants is on its way to an undisclosed area of the Mexico-U.S. border. While the Mexican government is reporting a three-thousand people-strong group (3,000) is set to arrive in the coming weeks, journalists in Tapachula have reported anywhere from five-thousand (5,000) to seventy-thousand (70,000) are awaiting the asylum process. Even without correct papers, most plan to make the journey north.

The main caravan is being led by individuals such as Mexican-American Irineo Mujica. Mujica is part of a “pro-migrant” organization that operates internationally, and has been investigated for human trafficking in the past. As the Director of the nonprofit Pueblo Sin Fronteras (People Without Borders/PSF), Mujica has been arrested and detained throughout his career for attacking immigration agents, local and federal police, after he was asked for identification documentation.

Mujica has recently been quoted on the intentions of his latest caravan: “we prefer to march with [travel] papers… and this time, with papers or without papers, we are ready for war. If the National Guard comes and they are cowardly enough to beat women and children, let them prepare because God’s hands is with us.”

Earlier this month, the group violently pushed through a National Guard roadblock in Tapachula, Mexico, overwhelming the forces dressed in riot gear.
PSF has been linked to multiple prior caravans, such as one in April of 2018. The group is linked to organizations like Casa de los Amigo and the Popular Assembly of Migrant Families (APOFAM), who favor the total destruction of U.S. borders.

The formation and rhetoric of the latest highly-organized caravan is nothing new. The process follows the same pattern as caravans of illegal immigrants dating back over a decade, frequently led by Mujica and PSF.

The latest caravan are mixed in origin of travel, coming from Haiti and countries across Southern and Central America. Members carry banners with Joe Biden’s name and the American flag. None have reported their exact final destination on the border, leaving the guess-work to border patrol agents in California, Arizona, New Mexico and Texas.

According to a source at the Texas Assistant United States Attorney department, Border patrol agents have largely been placed on desk-duty. There is a sense of demoralization given the scale of the border crisis, and the lack of support from the federal government.

As part of a campaign promise, the Biden Administration ended then reinstated a softer version of President Trump’s “Remain in Mexico” policy. Since this decision by the Democratic leadership, the U.S. has seen record numbers of unaccompanied children crossing the border, as well as record arrests, and human trafficking.

This week, the Biden Administration announced stringent new rules for foreign travelers entering the country legally. It is unclear whether any of these rules will apply to the caravan of illegal migrants planning to overwhelm the border in coming weeks.

We can assume that the rules will not apply to the caravan, similarly to COVID-19 vaccination rules for all illegal aliens entering the U.S. under the Biden Administration.
images/ondertekening.jpg
Omhoog
Plaats reactie
1 bericht • Pagina 1 van 1