Apple took down a Quran app and a Bible app in China on the request of Chinese officials
Isobel Asher Hamilton Oct 15, 2021, 2:04 PM 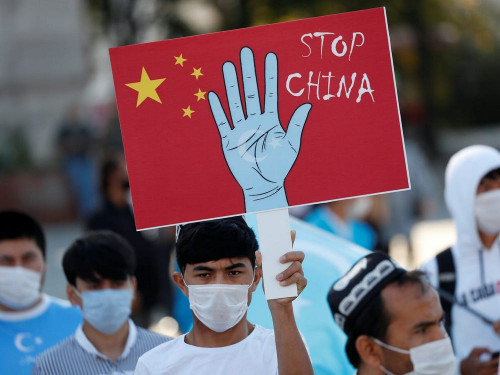 Apple has censored a Quran app and a Bible app in China, the company confirmed to the BBC.
Apple said Chinese officials had flagged the apps as breaking laws on illegal religious texts.
Apple's human rights policy says the company is "required to comply with local laws."

Apple has taken down a Quran app and a Bible app in China at the request of Chinese officials, the company confirmed to the BBC.

The apps, which are called Quran Majeed and Bible App by Olive Tree, were first reported as having been taken down by activist website Apple Censorship on Tuesday.

Apple directed the BBC to its Human Rights policy, which says: "We're required to comply with local laws, and at times there are complex issues about which we may disagree with governments and other stakeholders on the right path forward. "

Quran Majeed has over 5 million downloads on the Google Play Store, while Bible App by Olive Tree has just over 1 million.

The developer of the Quran Majeed app confirmed to Insider the app had been removed from China's App Store, and said Apple had advised it to contact the the Cyberspace Administration of China (CAC).

"According to Apple, our app Quran Majeed has been removed from the China App Store because it includes content that is illegal in China as determined by the CAC, which is not in compliance with the App Store Review Guidelines," Hasan Shafiq Ahmed, head of growth at Pakistan Data Management, told Insider in an email.

"We are trying to get in touch with CAC and relevant Chinese authorities to get this issue resolved as we had close to a million users for our app in China that have been impacted," Ahmed added.

The developer behind Bible App by Olive Tree did not immediately respond when contacted by Insider.

Apple did not immediately respond when contacted by Insider for comment.

The Chinese government has systematically persecuted its minority Uighur Muslim population and was detaining as many as 1 million people in a network of prison facilities, Human Rights Watch said in April.

In 2019 Insider's Alex Ma reported on China's various attempts to crack down on Muslims, Christians, and Bhuddists.

LinkedIn announced Thursday it was shutting down its localized site in China after it faced criticisms for censoring accounts in the country.
images/ondertekening.jpg
Omhoog
Plaats reactie
1 bericht • Pagina 1 van 1