'They'll take your liver and you won't even know': China's real-life Squid Game: How organs are harvested from THOUSANDS every week for a 'kill to order' market - and why the world is powerless to stop it
China has a real-life Squid Game harvesting the organs of political dissidents
Thousands of prisoners are slaughtered for hearts, kidneys, livers and corneas
UN experts recently released a statement about the 'kill to order' organ program
But the international community are powerless to stop the terrifying trade
By LEVI PARSONS FOR DAILY MAIL AUSTRALIA

Viewers were enthralled by the blood-soaked dystopian thriller that pits players against each other in contests fought to the death for a chance to win cash.

And while the Asian drama is obviously fictitious and a pointed critique of modern life, one of the show's side plots where human beings have their organs harvested and sold is very real.

But the international community remains powerless to stop the slaughter because the World Health Organisation is compelled to accept the totalitarian nation's 'inadequate and misleading' hospital data without question. 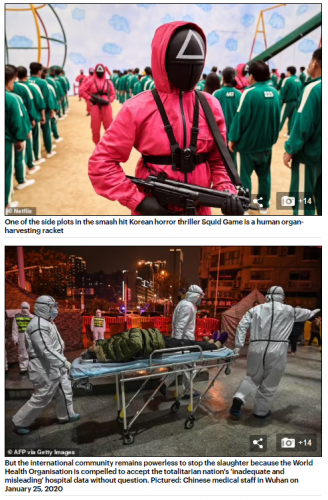 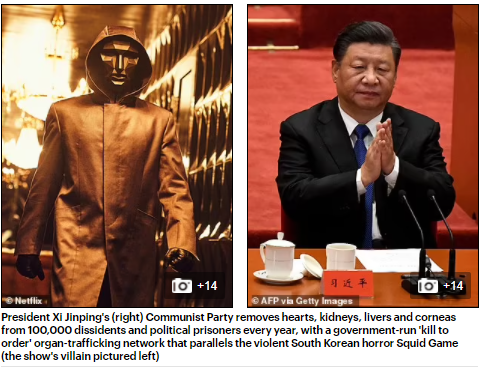 Just a week before the Netflix hit was released, Beijing furiously denied the existence of a state-sponsored organ harvesting program after the UN Human Rights Office of the High Commissioner said China was 'targeting specific ethnic, linguistic or religious minorities held in detention' and raking in a billion dollars a year.

'They have received credible information that detainees... may be forcibly subjected to blood tests and organ examinations such as ultrasound and x-rays, without their informed consent; while other prisoners are not required to undergo such examinations.

'The results of the examinations are reportedly registered in a database of living organ sources that facilitates organ allocation.

'According to the allegations received, the most common organs removed from the prisoners are reportedly hearts, kidneys, livers, corneas and, less commonly, parts of livers.' 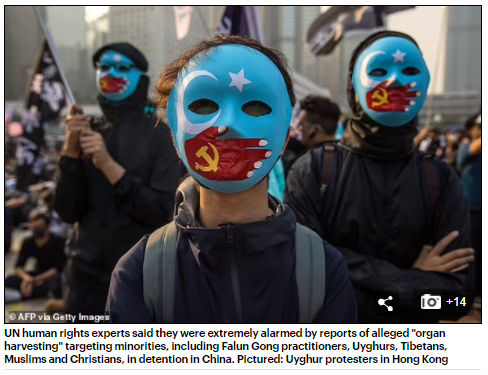 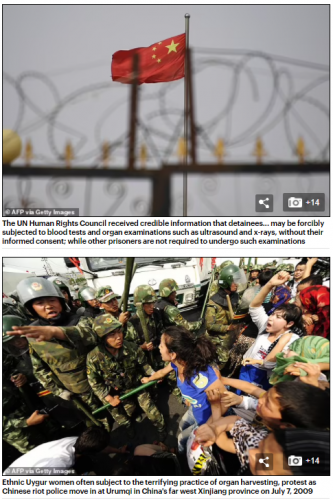 The grim statement also points out that this form of alleged trafficking relies heavily on skilled health care workers sworn to protect their patients including 'surgeons, anaesthetists and other medical specialists' as well as participation from various public sector professionals.

'Some prisoners receive death threats and threats of organ harvesting from the police, if they do not renounce their beliefs or refuse to cooperate with the police,' the statement said.

One of the 'red flags' with China's organ transplant system is that recipients can book surgeries at specific times and locations.In other medical systems this does not happen because surgeons cannot predict when a person who has elected to be an organ donor will die.

Under an 'ethical' process approved by the WHO, the deceased's organs will be matched to the most urgent patient on a transplant list who is within travelling distance of the hospital.

For many desperate people it can take years to receive transplant surgery as recipients must be the same blood-type as the deceased and have the same sized organ. 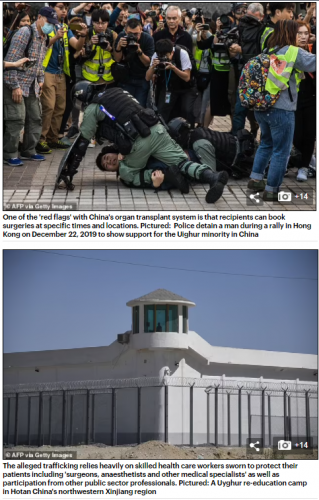 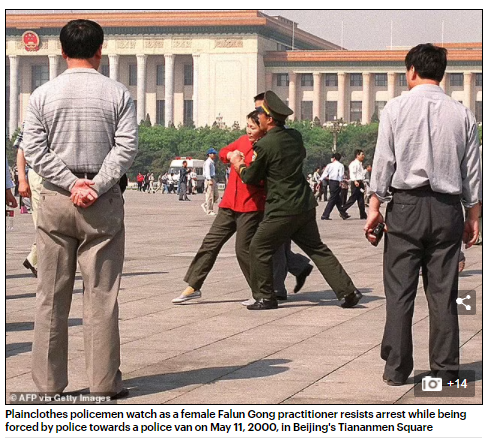 But undercover phone calls made to Chinese hospitals as part of the independent China Tribunal hearings in 2019 show how fast patients can get surgery under the 'kill to order' system.

In one excerpt, Dr Feng Zhendong from a Shandong Province military hospital tells the investigator over the phone about the 'abundance of organs' which arrive 'every month'.

Although China's disturbing state-sponsored organ-trafficking has been well-documented for decades, there is very little the international community can do to stop the horrific trade.

Beijing is able to coverup their human rights abuses by under-reporting transplant data to the World Health Organisation which is compelled to accept the official statistics of member states.

Susie Hughes, the Executive Director of The International Coalition to End Transplant Abuse in China said China's claims they are performing 10,000 to 20,000 do not stack up.

'A recent statistical analysis of China's current organ transplant system showed the numbers China has been putting out have been falsified,' she told Daily Mail Australia.

'When you examine hospital revenues, bed utilisation rates and the number of surgical teams from the official Chinese data... the figure is more likely to be between 60,000 to 100,000 transplants per year.'

The China Tribunal found the Uyghur Muslim minority along with followers of the banned spiritual practice Falun Gong, are essentially being used 'as an organ bank' for domestic and foreign buyers.

Falun Gong practitioner Jinato Liu, who was incarcerated for over two years gave terrifying testimony to the expert panel.

'I was locked in a cell with about eight drug addicts, who were commonly induced to abuse Falun Gong practitioners.

'These drug addicts were rostered on shifts to persecute me by the guards' order.

'The cell had a surveillance camera installed, so the guards knew everything that happened inside 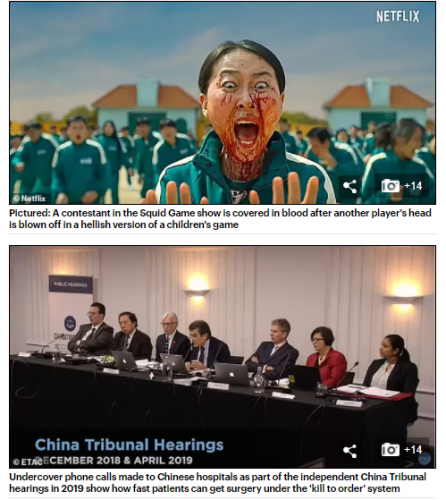 'One day a drug addict inmate was beating my back and waist and another inmate came in from outside and yelled at him: "Don't injure his organs"!'

Uyghur prisoner Zumuret Dawut said she was taken to hospital on the first day of her three months in detention to have her organs scanned.

'Only after they removed the black hood from over my head did I realise I was in a hospital,' she said in her testimony.

'I saw police in uniform everywhere, also people wearing white coats walking about, so I guessed that I was in a hospital.

'They drew blood samples first, then X-rayed my internal organs.'

Another Falun Gong member, Yu Xinhui, who spend six years behind bars said a prison system medical practitioner had tried to warn him of the horror. 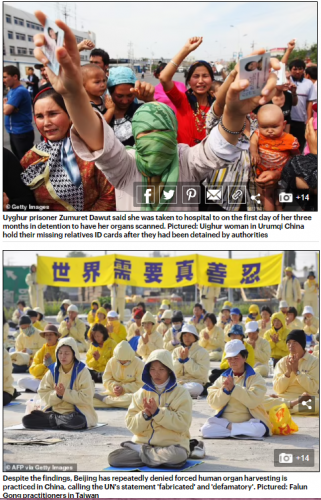 'One prison doctor who was sympathetic to us Falun Gong practitioners secretly told me,' Mr Yu said in his evidence.

'Don't go against the Communist Party. Don't resist them. If you do, when the time comes, you won't even know how you have died.

'When it happens, where your heart, liver, spleen and lungs will be taken, you won't even know.'

Despite the findings, Beijing has repeatedly denied forced human organ harvesting is practiced in China, calling the UN's statement 'fabricated' and 'defamatory'.