F.B.I. Official Fired Under Trump Wins Back His Pension

F.B.I. Official Fired Under Trump Wins Back His Pension

F.B.I. Official Fired Under Trump Wins Back His Pension
Andrew G. McCabe, the former F.B.I. deputy director, will receive his pension and other benefits after settling his lawsuit with the Justice Department. 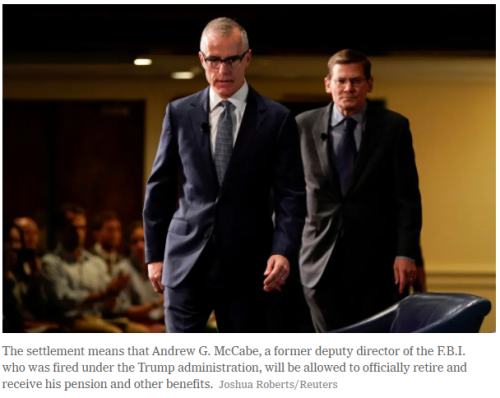 WASHINGTON — Hours before he was scheduled to retire in 2018, Andrew G. McCabe, then the F.B.I.’s deputy director, was fired by the Justice Department, depriving him of his pension and prompting cheers from President Donald J. Trump, who had been hounding him over his role in the Russia investigation.

On Thursday, the department reversed Mr. McCabe’s firing, settling a lawsuit he filed asserting that he was dismissed for political reasons. Under the settlement, Mr. McCabe, 53, will be able to officially retire, receive his pension and other benefits, and get about $200,000 in missed pension payments.

In addition, the department agreed to expunge any mention of his firing from F.B.I. personnel records. The agreement even made clear that he would receive the cuff links given to senior executives and a plaque with his mounted F.B.I. credentials and badge.

The Justice Department did not admit any wrongdoing. But the settlement amounted to a rejection by the Biden administration of how Mr. McCabe’s case had been handled under Mr. Trump, who perceived Mr. McCabe as one of his so-called deep-state enemies and repeatedly attacked him. A notice of the lawsuit’s dismissal was also filed in federal court.

“Politics should never play a role in the fair administration of justice and Civil Service personnel decisions,” Mr. McCabe said in a statement. “I hope that this result encourages the men and women of the F.B.I. to continue to protect the American people by standing up for the truth and doing their jobs without fear of political retaliation.”

Mr. McCabe thanked his lawyers at the firm of Arnold & Porter, who will receive more than $500,000 in legal fees paid by the government. The firm intends to donate the money to its foundation, which provides scholarships to minority law students, among other things.

“What happened to Andrew was a travesty, not just for him and his family, but the rule of law,” said Murad Hussain, one of Mr. McCabe’s lawyers. “We filed this suit to restore his retirement benefits, restore his reputation and take a stand for the rights of all civil servants, and that’s exactly what this settlement does.”

The Justice Department did not immediately respond to a request for comment.

Jeff Sessions, the attorney general at the time, fired Mr. McCabe on March 16, 2018, after the department’s inspector general said Mr. McCabe had lied repeatedly about a leak to a newspaper about Hillary Clinton’s use of a private email server. The case was referred to prosecutors, who ultimately decided not to charge Mr. McCabe with making false statements to a law enforcement officer.

Mr. Sessions acted a day before Mr. McCabe’s retirement was set to take effect, and after months of public criticism of Mr. McCabe by Mr. Trump.

The Park Bench Is an Endangered Species

In Katie Couric’s ‘Going There,’ There Includes Family Skeletons, Busting Into the Boys’ Club and More

Must I Be Kind to My Money-Grubbing Parents?
Continue reading the main story
With the lawsuit resolved, the Justice Department and F.B.I. avoid the risk that moving toward a trial could produce embarrassing information through the discovery process and depositions. In September 2020, a federal judge rejected the department’s efforts to dismiss the case, allowing the litigation to move forward.

Mr. McCabe’s lawyers had planned to question the F.B.I. director, Christopher A. Wray, and his former deputy, David L. Bowdich. The lawyers would have also grilled Mr. Sessions and his deputy at the time, Rod J. Rosenstein, as well as others, including the department’s inspector general, Michael E. Horowitz.

Mr. McCabe and his lawyers had argued that he was fired because he refused to swear loyalty to the president at the time. He also had been part of F.B.I. leadership that opened an investigation into whether any Trump campaign associates had conspired with Russia in the 2016 presidential election. Mr. Trump repeatedly called the inquiry a witch hunt and fired the F.B.I. director at the time, James B. Comey, after expressing his fury about the investigation.

Mr. Trump had urged the Justice Department to get rid of Mr. McCabe. After the news media reported in December 2017 that Mr. McCabe planned to retire, Mr. Trump said on Twitter that “FBI Deputy Director Andrew McCabe is racing the clock to retire with full benefits. 90 days to go?!!!”

Mr. McCabe, a graduate of Duke University and of Washington University School of Law in St. Louis, joined the F.B.I. in 1996 as an agent in the New York office and quickly climbed the bureau’s ranks. Mr. Comey appointed Mr. McCabe deputy director in 2016, putting him in charge of operations as the bureau’s senior most agent.

Mr. McCabe’s rise in the bureau took a vertiginous turn in January 2018 when Mr. Wray demoted Mr. McCabe without telling him why. Mr. McCabe then elected to take leave until March, when he was eligible for retirement.

Nearly a month after he was fired, the inspector general released his findings, issuing a report on Mr. McCabe’s conduct, saying he had failed to be completely honest in answering questions about his role in the news media leak about the Clinton case.

Mr. McCabe sued over his dismissal, saying he was a victim of political retaliation. In the suit, he said that Mr. Sessions, Mr. Wray and others “served as Trump’s personal enforcers rather than the nation’s highest law enforcement officials, catering to Trump’s unlawful whims instead of honoring their oaths to uphold the Constitution.”

Firing Mr. McCabe “was a critical element of Trump’s plan and scheme” to rid the F.B.I. and Justice Department of those deemed not loyal to the president, his lawsuit said. Mr. McCabe accused the department of retaliation and terminating him for political reasons, which violated agency policies. Mr. McCabe’s lawyer also argued that as a career civil servant, Mr. McCabe should have been given 30 days’ notice before he was fired.

Indeed, a series of emails raised questions about whether Mr. McCabe’s firing was fast tracked by the F.B.I. or Justice Department. The emails were obtained by Citizens for Responsibility and Ethics in Washington, or CREW.

Just after noon on March 5, 2018, Candice M. Will, who oversaw the termination effort for the F.B.I.’s Office of Professional Responsibility, emailed Mr. Rosenstein to let him know that her office had completed its review and was preparing a recommendation.

Later that same day, Ms. Will then emailed Mr. Bowdich: “I let the Dept know that we are doing what should be done, not slow walking — we are following the established procedures.”

He responded that they would be “second guessed by some every step of the way however this ends up.”

Why Ms. Will made the comment about “slow walking” is not publicly known, but Mr. McCabe’s lawyers intended to find out and depose her if the case had moved forward.

On March 7, Ms. Will recommended that Mr. McCabe be fired over the inspector general’s report. In a handwritten note accompanying the recommendation, she advised Mr. Wray and Mr. Bowdich: “It seems unlikely that this will reach final resolution before Mr. McCabe’s March 18 retirement date.” But, she said, it was up to the deputy attorney general.

She spoke later that day to a top aide of Mr. Rosenstein, which seemed to set off a flurry of activity — including meetings and sensitive calls — among senior department officials scrambling to make sure Mr. McCabe was fired before his planned retirement date. In one instance, Steven A. Engel, the head of the department’s office of legal counsel, emailed one of Mr. Rosenstein’s aides with the F.B.I. guidelines for removing a senior bureau official.

After Mr. McCabe was fired, Mr. Trump celebrated on Twitter, calling it “a great day for the hard working men and women of the FBI — A great day for Democracy.”
images/ondertekening.jpg
Omhoog
Plaats reactie
1 bericht • Pagina 1 van 1