How 'Zuckerbucks' helped swing the 2020 election for Biden

How 'Zuckerbucks' helped swing the 2020 election for Biden

Facebook CEO Mark Zuckerberg and his wife gave nearly $420million to nonprofits that aided in the administration and infrastructure of the 2020 election, and heavily favored Democrat counties, according to a new report.

Zuckerberg, 37, and his wife Priscilla Chan, 36, donated $419.5million to The Center for Technology and Civic Life (CTCL) and The Center for Election Innovation and Research (CEIR), which the report says was given with specific conditions.

Using the donations, both CTCL and CEIR sent funds to local governments to implement administrative practices, voting methods, data-sharing agreements, and outreach programs for the 2020 elections.

Analysis shows Biden-winning counties were three times more likely to get funding from the organizations than Trump ones, and the Democrats were reportedly given a significant boost in key swing states through promotion of practices that have typically favoured their vote tally, such as mail-in voting.

The bombshell report - published in the Federalist on Tuesday - sparked outrage from senior Republicans, with Florida Gov. Ron DeSantis blasting the Facebook founder during a news conference and saying recent election reform had 'banned Zuckerbucks' in the state.

'So, Zuckerberg, he spent over $400 million through these, quote, nonprofits to, quote, help with election administration,' DeSantis said.

'But what they would do is they would require certain things to be done like mass mail balloting, ballot harvesting, and they would focus on partisan voter turnout, basically. That was totally unacceptable.'

Senator Ron Johnson of Wisconsin - one state that was reportedly targeted by the non-profit's practices - said: 'I continue to question whether Mark Zuckerberg's highly partisan 2020 election spending was even legal.' 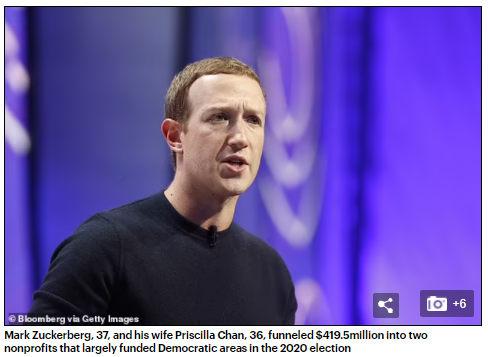 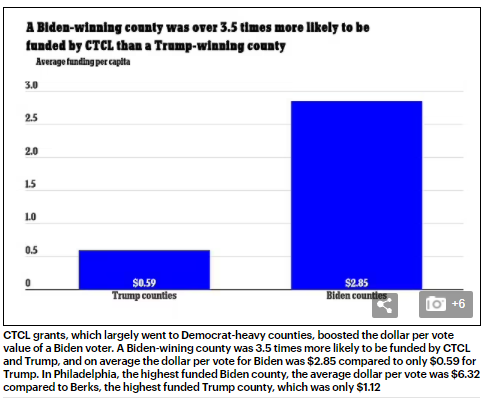 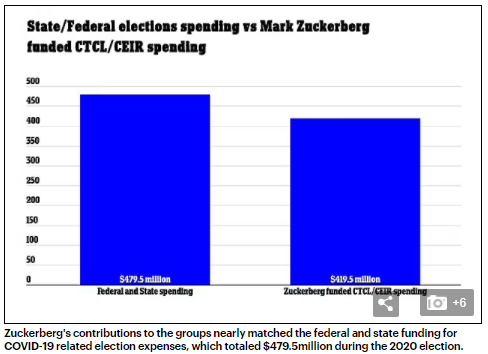 And Senator Rand Paul of Kentucky tweeted: 'Are our elections for sale? Did Mark Zuckerberg purchase the Wisconsin Presidential election?'

While CTCL and CEIR are both non-partisan organisations, the report calls the non-profits 'demonstrably ideological', and claims both likely contributed to the record-breaking turnout that led to Joe Biden's win in 2020.

Zuckerberg's funds may have helped get more voters to the polls in Arizona, which Biden won by 10,000 and Georgia, which he won by 12,000, according to analysis by the Caesar Rodney Election Research Institute - a Delaware-based think tank.
'We have good reason to anticipate that the results of our work will show that CTCL and CEIR involvement in the 2020 election gave rise to an election that, while free, was not fair,' wrote Dr. William Doyle, the principle researcher behind the analysis.

'The 2020 election wasn't stolen — it was likely bought with money poured through legal loopholes,' he concludes in the report.

A total of $64.2million of Zuckerberg's money was distributed by CEIR to 22 states and the District of Columbia.

CTCL reportedly demanded the promotion of mail-in voting practices - which was heavily supported by the Democrats - and also helped fund poll workers and temporary staff, and the quick increase of unmonitored private drop boxes for mail-in votes.

And in Wisconsin the money funded 'vote navigators' who 'assist voters, potentially at their front doors, to answer questions ... and witness absentee ballot signatures.'

Zuckerberg's contributions to the groups nearly matched the federal and state funding for COVID-19 related election expenses, which totaled $479.5million during the 2020 election.

Despite CTCL and CEIR being registered as non-partisan organizations, the Institute's analysis found that groups allocated their money in mainly Democratic areas.

CTCL provided 25 counties with $1million or higher grants in Arizona, Georgia, Michigan, North Carolina, Pennsylvania, Texas, and Virginia, totaling $87.5million in grants. Biden won 23 of those counties in the election.

Brown County in Wisconsin, which Trump won, received a $1.1million grant from the nonprofit, which totaled only a mere 1.2 per cent of the grants offered within the 25 counties.

But within the county, funding disparities were stark.

The Wisconsin legislature gave the city of Green Bay roughly $7 per voter to manage the election, while rural areas received $4 per voter.

But CTCL boosted resources in Green Bay, a Democrat-heavy area, to $47 per voter, while rural counties typically stayed at the $4 mark.

Similar disparities were found in Detroit, Atlanta, Philadelphia, Pittsburgh, Flint, Dallas, and Houston, among others that received large grants from the nonprofit, according to the report.
images/ondertekening.jpg
Omhoog
Plaats reactie
1 bericht • Pagina 1 van 1