European intelligence agencies are deploying resources to track QAnon as the conspiracy theory spreads beyond the US,

European intelligence agencies are deploying resources to track QAnon as the conspiracy theory spreads beyond the US,

European intelligence agencies are deploying resources to track QAnon as the conspiracy theory spreads beyond the US, sources say
Mitch Prothero Oct 13, 2020, 6:32 PM 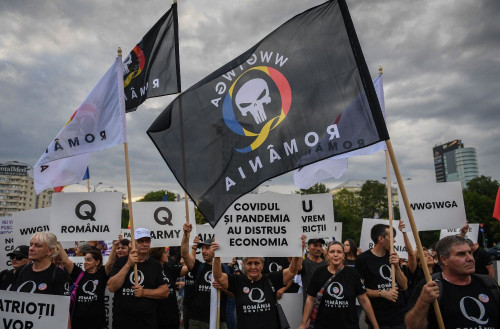 QAnon is a US-centric conspiracy-theory movement, but it's attracting supporters beyond its shores.
Security officials in Belgium and France said their agencies were reconsidering decisions to ignore the movement, conceding that it could bring about violence in their countries.
A Belgian official argued that QAnon offered a similar comfort to its followers as Islamic extremism and that it might attract similar personalities.
An official in France said that while he and his colleagues were not focusing strongly on QAnon now, he would not be surprised if that changed.

Europe's domestic intelligence and law-enforcement services have apprehensively watched the QAnon conspiracy theory migrate from the US and now consider it a significant security concern.

That assessment was given by two security officials contacted by Insider, both of whom spoke on the condition of anonymity given the nature of their work.

QAnon advocates claim that the US is secretly controlled by a cabal of politicians, celebrities, and media figures who engage in child abuse and pedophilia and that President Donald Trump will eventually move against these people. Its believers seek clues from an unknown government insider known as Q. There is no evidence to support the theory, and none of its foretold reckonings have taken place.

Nonetheless, its popularity has grown in recent years despite efforts from social-media companies to evict QAnon from their platforms. It has also gained followers in Europe.

A Belgian counterterrorism official told Insider that many European services like his were now rethinking a decision to ignore QAnon as a solely American phenomenon.

He drew parallels between QAnon and jihadist movements that have traditionally occupied intelligence agencies.

"I worked on jihadis and Al Qaeda, ISIS, for over 20 years, and now I am looking at the secular American version," said the official, who's part of Belgium's Federal Police. 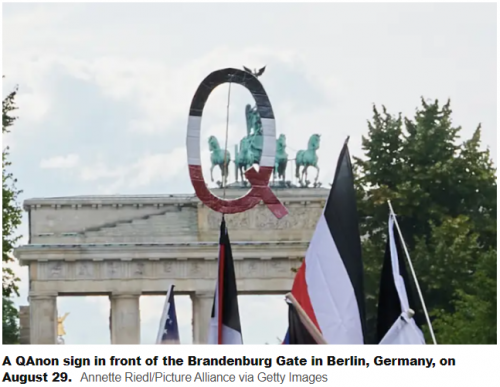 "This Q thing is very similar to jihadism in several ways that are not obvious at first. For example, both are cults of magical thinking. Jihadis are drawn to the cause because they find comfort in a black-and-white morality in a complex world.

"And then they get to participate in a new version of reality, one where they aren't just a flawed person but they're heroes in a battle that normal people are too ignorant to even see.

"So it turns out the world isn't a complex place where making the right choices and understanding things around you can be a challenge," the official continued. "It's a very simple place where there's good and evil and you get to be good and oppose evil.

"And you're no longer some Moroccan kid from Molenbeek — you're a holy warrior protecting the true Islam," the official said, referring to a Brussels neighborhood associated with jihadism. "Or you're no longer some normal suburban person with a boring job — you are on the front lines battling a lizard-person death cult."

When asked whether fears of Q-related violence in Europe were legitimate, the official said they probably were.

"I'd be more concerned if I was American, because obviously most cult believers won't engage in violence — just as most adherents of Salafism never become violent jihadis — but a handful probably will," the official said. "But everyone having easy access to all sorts of guns in the US makes it more dangerous. Most of our jihadi attacks these days are mentally ill people waving knives, and I expect we could see the same from Q. But in Europe there's less of a chance the person will have an assault rifle."

A French police official based in Paris said that a long list of other concerns meant that significant resources hadn't been assigned to QAnon. But he said that could change.

"I think the cult of Q will find adherents among the crazier parts of the [Yellow Vest] protesters and that there will be violence. But I wouldn't expect the French establishment to do much about crazy violent white people until someone gets killed."

The French and Belgian officials pointed to Germany as the most worrying venue for QAnon in Europe.

An official from the German domestic intelligence service, the Federal Office for the Protection of the Constitution, declined to comment directly. But when asked whether a recent New York Times article on the rising threat of QAnon in Germany was accurate, the official said, "Absolutely it is part of an overall concern about the radical right."
images/ondertekening.jpg
Omhoog
Plaats reactie
1 bericht • Pagina 1 van 1