China thumbs nose at climate targets as it plans to build more coal power stations and ramp up oil and gas exploration to solve its energy crisis just weeks ahead of COP26 summit
Beijing plans to build new coal-fired plants and intensify oil and gas exploration after being hit by blackouts
China had committed to capping carbon emissions by 2030 but Premier hinted pledge could be scrapped
Move will cause alarm ahead of the COP26 summit in Glasgow in two weeks, and is a major blow to the UK's plans for securing a global agreement on phasing out coal
By LAUREN LEWIS and RACHAEL BUNYAN FOR MAILONLINE

China is making a mockery of climate targets as it announced plans to build more coal-fired power plants and increase oil and gas exploration, just weeks ahead of the COP26 summit where world leaders were expected to agree to ambitious emission cuts.

Li Keqiang, China's second-in-command, made the announcement after the meeting and hinted that a pledge to cap the country's carbon emissions by 2030 - which already lags behind commitments made by other major economies - could be torn up.

His announcement will cause alarm ahead of the COP26 summit in Glasgow in two weeks, and is a major blow to the UK's plans for securing a global agreement on phasing out coal.

Amidst a global energy crisis caused as economies reopen post-Covid, China has also ordered its 682 coal mines to raise their annual output capacity to 55.3 million tonnes while imports soared by 76% last month.

Elsewhere, India has also ordered its own mines to increase production amid shortages and blackouts, and has increased its own imports as well.

China is already the world's largest polluter, with more than 50% of its energy coming from coal, which is considered the most-polluting source. 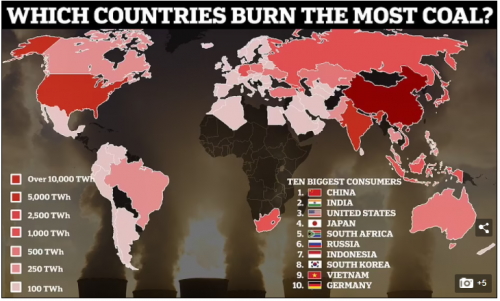 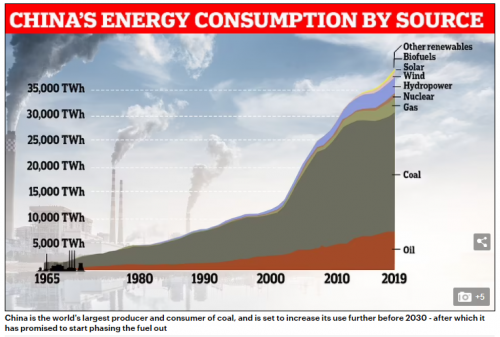 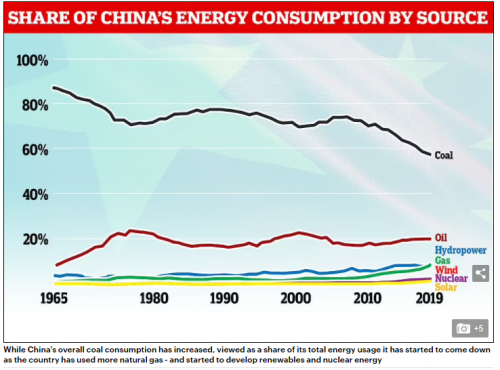 The UN has said if global emissions are not cut by 50% by 2030, the climate crisis will lead to further wide-ranging and more destructive natural disasters, such as flood and drought.

But with every passing day, that goal seems to be moving further out of reach - with the boss of a South African coal mine saying today that he sees demand for coal continuing for the next two decades at least.

Beijing had previously committed to hitting peak emissions in 2030 and being carbon neutral by 2060 - a target which would involve the closure of more than 600 coal plants.

But Chinese Premier Li Keqiang hinted that this commitment may be up for debate as he said Beijing will build more coal-fired plants as China seeks to enhance the 'capacity for energy self-supply' and create a 'modern energy system'.

Keqiang said: 'Energy security should be the premise on which a modern energy system is built and and the capacity for energy self-supply should be enhanced,' the Guardian reported.

'Given the predominant place of coal in the country's energy and resource endowment, it is important to optimise the layout for the coal production capacity, build advanced coal-fired power plants as appropriate in line with development needs, and continue to phase out outdated coal plants in an orderly fashion.

'Domestic oil and gas exploration will be intensified.'

China has been suffering from widespread power outages that have shut factories and hit production and global supply chains amid a global energy shortage that has seen demand for fossil fuels soar despite the UN warning of the devastating effects.

July Ndlovu, the boss of the South African coal mine Thungela, said the demand for coal production will last for the next two decades.

Inlovu told Radio 4's Today programme that while Europe and the US will be at the forefront of the transition from coal toward renewable energies, countries such as China and India - which have far younger fossil fuel infrastructure - will follow much later.

He said: 'You can considerably see the US and Europe returning their coal plants earlier and then the rest of the developing economies on the back end of that.

'Clearly there is uncertainty on how long that will be, but we certainly see demand lasting until into the next decade-and-a-half or even two decades.'

Keqiang added officials want to gather new evidence to rethink a roadmap for reaching peak emissions, with the deadline likely to be extended beyond 2030.

The premier said he had ordered 'in-depth studies and calculations in light of the recent handling of electricity and coal supply strains, to put forward a phased timetable and roadmap for peaking carbon emissions.'


It came after blackouts hit cities across China last week amid a spike in demand for energy around the globe.

The country was so short on power that cities were hit by blackouts with factories forced to close or else open for just a couple of hours per week.

The crisis, which began biting a fortnight ago, was caused by the cost of coal spiking as the economy reopened post-Covid, meaning power stations were operating at a loss and began to shut down. As a result, China's imports of coal surged by 76% in September.

Power outages were reported in southern Guangdong province, but are most severe in the north eastern manufacturing hubs of Heilongjiang, Jilin and Liaoning.

And an additional 16 provinces were forced to ration energy due to a shortage in supply, but avoided full-scale blackouts.

In China's No. 2 coal region, Inner Mongolia, 72 mines were told that they could operate at higher capacities immediately, provided they ensure safe production. 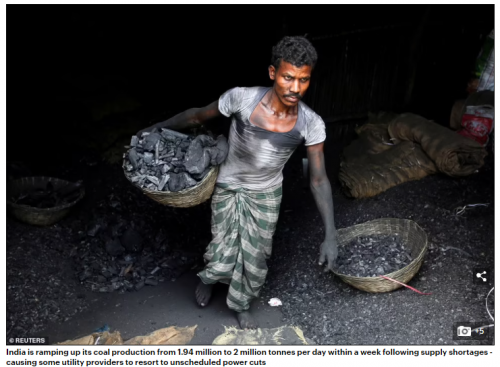 But incessant rain has flooded 60 mines in Shanxi, as four mines with a combined annual output capacity of 4.8 million tonnes remained shut in the region.

The flooding has worsened the supply outlook, with electricity shortages and rationing expected to continue into early next year.

Former UK Labour leader Ed Miliband, who now serves as the Shadow Secretary of State for Business, Energy and Industrial Strategy, said China must 'step up' in reducing their emissions but also criticized the UK government for not putting pressure on Beijing to make them act.

Miliband told the Radio 4's Today Programme: 'The Chinese need to step up and it is a problem. This is happening because the UK haven't built the coalition to put the pressure on countries like China to make them step up.

He added: 'The Paris Agreement succeeded because we had an alliance of developing and vulnerable countries and developing countries like ours that put maxiumum pressure on the biggest emitters like China.

'Now the problem is, because the (UK) government hasn't had a proper strategy for this COP23 summit, we haven't built that coalition.'

It comes amid a wider energy crisis that has seen shortages and soaring prices in Europe, India and China.

In response, India is ramping up its coal production from 1.94 million to 2 million tonnes per day within a week following supply shortages which caused some utility providers to resort to unscheduled power cuts, reports The Statesman.

India was said to have been close to running out of coal, but government sources said coal-powered plans are maintaining stock for five days. The sources said in a month's time, the levels of coals will be back to usual levels.

Coal accounts for nearly 70 percent of India's electricity generation and around three-quarters of the fossil fuel is mined domestically.

Even before the current energy crisis erupted, the world was far behind on efforts to avert catastrophic climate change.

The United Nations estimates that global emissions will be 16 per cent higher in 2030 than they were in 2010 based on countries' current pledges.
images/ondertekening.jpg
Omhoog
Plaats reactie
1 bericht • Pagina 1 van 1