Yes, Robot Dogs Can Now Carry Sniper Rifles on Their Backs
This 'is literally the Metalhead episode of Black Mirror.' 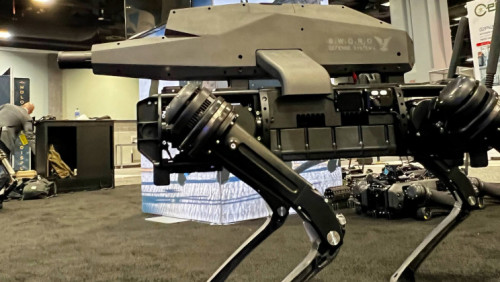 The SPUR robotic dog system.Ghost Robotics
Decades of popular dystopian science fiction have warned that this might happen, and yet, here we are.

A military robot maker, Ghost Robotics, strapped a sniper rifle to the back of a quadrupedal robot dog before presenting its deadly creation at the Association of the U.S. Army's main annual convention in Washington, D.C. this week.

The Philadelphia-based firm shared an image on Twitter of its quadrupedal unmanned ground vehicle, or Q-UGV, donning a 6.5mm Creedmoor rifle from weapon company SWORD International. The system, called the Special Purpose Unmanned Rifle, or SPUR, has unsurprisingly courted controversy on social media.

'A soulless piece of hardware'
In a separate Instagram post, SWORD International stated its involvement with SPUR is "keeping [its special ops] teams armed with the latest lethality innovation." The majority of the comments below that image and Ghost Robotics' Twitter post decry the dystopian nature of the machine.

One commenter said "so y'all saw two Blade Runners, a Westworld show and movie, 10 Terminator movies, two Battlestar Galactica shows, I, Robot and still thought this was a good idea[?]" Another said Ghost Robotics has created "a soulless piece of hardware for brutal population suppression when the billionaires finally fear for their ill-gotten gains." Another simply stated, "this is literally the Metalhead episode of Black Mirror." 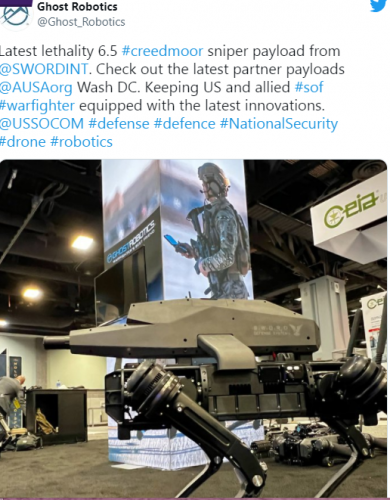 It's hard to argue with those comments. Ghost Robotics and SWORD's robot is a high-precision killing machine that could easily be linked to artificial intelligence capabilities already used on the battlefield with war drones and other state-of-the-art military equipment. Though SPUR is also intended for the battlefield, it's impossible not to acknowledge the elephant in the room, which is that robot dogs have so far predominantly been used in public spaces.

Experts call for a ban on killer robots
Unlike war drones, quadrupedal robots have already been utilized for population control by law enforcement in countries such as Singapore, where a Boston Dynamics Spot robot was used to implement social distancing rules in 2020. Robotics also has a controversy-baiting link to law enforcement in the U.S. In December 2020, the New York Police Department trialed a Boston Dynamics Spot robot for law enforcement, though a public outcry forced the department to cancel its $94,000 contract with the robotics firm.

In 2015, experts including Elon Musk, Noam Chomsky, and Stephen Hawking signed an open letter calling on the United Nations to place an outright ban on killer robots, stating that the majority of AI researchers "have no interest in building AI weapons." The Stop Killer Robots Campaign has also gained traction in recent years and has been joined by ex-employees of big tech firms such as Google after its involvement in Project Maven, which was aimed at enhancing U.S. military drone technology.

On its website, SWORD says "the [SPUR] was specifically designed to offer precision fire from unmanned platforms such as the Ghost Robotics Vision-60 quadruped. Due to its highly capable sensors, the SPUR can operate in a magnitude of conditions, both day and night." Aside from that, little has been revealed in the way of SPUR's specifications. We don't know, for example, if it is remotely operated or whether it operates with a degree of autonomy. We also don't know whether the robot was designed with a particular client in mind or as part of a contract with any military organization.
images/ondertekening.jpg
Omhoog
Plaats reactie
1 bericht • Pagina 1 van 1