White House schedules a global ransomware summit WITHOUT Russia or China - despite saying they are the worst offenders in a global hacking epidemic that has cost $400M
30 nations met virtually to discuss ransomware attacks on Wednesday morning
The White House did not invite Russia, which is behind many of the attacks
'In this particular forum they were not invited to participate,' said an official
Also missing was the world's second biggest economy, China
The U.S. government said cyber ransoms totaled more than $400M last year

Russia was not invited to attend a 30-country virtual meeting to discuss ransomware on Wednesday, according to a senior Biden administration official.

The country hosts many of the hacker syndicates believed to be behind an epidemic of global attacks that cost $400 million in payments last year but will not be part of a White House-led effort to find new strategies to counter the threat.

'We are having active discussions with the Russians, but in this particular forum they were not invited to participate,' said a senior administration official.

Also absent from the list of participants was the world's second biggest economy, China, which was accused of hacking Microsoft servers earlier this year.

Nations were meeting to discuss ransomware attacks, which use a type of malware that criminals use to encrypt files on a victim's computer network before demanding a ransom to restore the data. 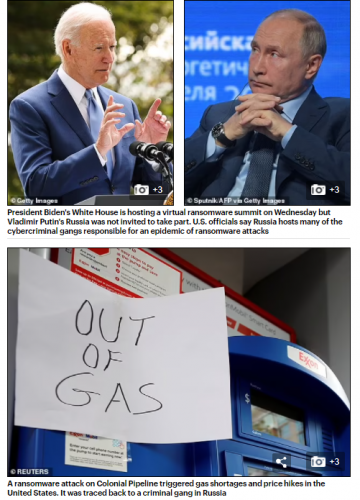 An attack on Colonial Pipeline, which triggered panic buying and gas shortages, was also traced to Russia-based hacker group.

Biden raised the impact of ransomware with Vladimir Putin during their summit in June, when he warned his Russian counterparts that critical infrastructure should be 'off limits.'

Putin denied that Russia was responsible and instead claimed that most cyberattacks were launched from the U.S.

But a recent report from Microsoft concluded that Russia was behind 58 percent of all state-sponsored hacking in the last year.

It mostly targeted government agencies and think tanks in the U.S., followed by Ukraine, Britain and European NATO members, the company said.

'You know, we know very well all of us who have gathered here today that we cannot do this alone,' he said.

'No one country, no one group can solve this problem.

'Transnational criminals are most often the perpetrators of ransomware crimes, and they often leverage global infrastructure and money laundering networks across multiple countries, multiple jurisdictions to carry out their attacks.'

Along with the United States, India, Australia, Germany and the United Kingdom will lead discussions on disrupting ransomware attacks and addressing the abuse of virtual currency.

The meeting opened with several dire warnings of the danger and impact of ransomware.